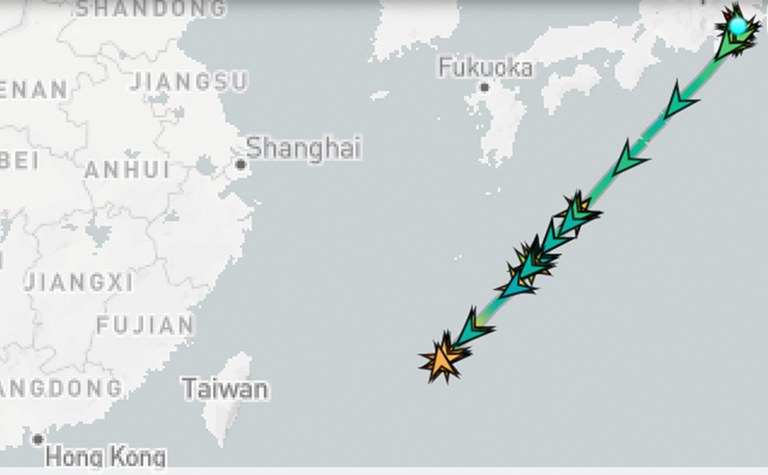 It was the last day of drills held as an angry response to U.S. House Speaker Nancy Pelosi’s visit to the island.

At the same time, the U.S. sent another warship to the east of Taiwan, expanding its presence in the area.

The ministry is “closely monitoring the situation,” it said in a brief statement, vowing to “respond accordingly.”

Meanwhile data provided by the ship tracking website Marine Traffic show that a U.S. Navy Missile Range Instrumentation Ship, the USNS Howard O. Lorenzen (T-AGM-25), has been deployed and is now operating in the waters east of Taiwan.

The ship, operated by the Military Sealift Command, is a missile-tracking vessel, equipped with the latest active electronically scanned array radar system to support the launching and tracking of missiles and rockets.

The vessel was dispatched from Yokosuka base in Japan on Aug. 3, showing the emphasis the U.S. Navy places on monitoring China’s missile activities.

On Aug. 4, the Chinese military launched 11 Dongfeng ballistic missiles into the northern, southern and eastern waters surrounding Taiwan. Five are believed to have landed inside Japan’s exclusive economic zone and four flew over Taipei.

U.S. Secretary of Defense Lloyd Austin ordered the Navy’s only forward-deployed aircraft carrier, the USS Ronald Reagan, to remain on station on Aug. 4 to monitor the situation in the area.

China announced the four-day drills on Tuesday evening when Pelosi landed in Taipei for a brief but highly symbolic stopover.

She is the highest ranking U.S. official to visit the island in 25 years.

Beijing has repeatedly condemned the visit as a “grave violation” of China’s sovereignty and integrity, and threatened the “strongest countermeasures.”

The drills appeared to have ended at noon on Sunday without the appearance of a Chinese aircraft carrier and submarine as previously reported in Chinese and Taiwanese media.

“The waves are big enough this week and all parties, including China, would see the need to start to cool off, and take stock of the crisis,” said Collin Koh, a Singapore-based regional military expert.

China on Friday released a set of eight “countermeasures” in response to the Pelosi visit, freezing collaboration on three sets of military dialogues with the U.S., as well as talks on the climate crisis, repatriation of illegal immigrants, counter-narcotics and legal assistance in criminal matters.

The defense talks included meetings between Chinese and U.S. military commanders and bilateral efforts to coordinate air and sea operations to prevent misunderstandings and clashes by warships operating at close range. Their suspension may increase the risk of miscalculation and confrontation, analysts said.

Before this, China also suspended imports of a number of Taiwanese products including natural sand, fish and fruit.

“I don’t expect Beijing to withdraw the import ban on Taiwanese products any time soon. In fact, this ban is likely to persist much longer,” said Koh from the S. Rajaratnam School of International Studies in Singapore.

“To impress upon how Beijing views the severity of this crisis, we would expect it to continue to suspend the climate and military dialogue mechanisms until, as it demanded, Washington ‘rectifies’ the wrong of proceeding with the Pelosi visit,” Koh said.

“All in all, the status quo in the Taiwan Strait is likely to see some change,” he added.

During the four days of military exercises, Chinese military aircraft and ships crossed the median line of the Taiwan Strait on multiple occasions and analysts say the line that serves as the de facto maritime border between Taiwan and China’s mainland “will likely exist merely in name” in the near future.

China has repeatedly rejected accusations of changing the status quo in the Taiwan Strait. Its top diplomat Wang Yi said on Friday: “Taiwan has never been a country.”

“There is only one China, and both sides of the Taiwan Strait belong to one country. This has been the status quo of Taiwan since ancient times,” the Chinese Foreign Minister said.

Military scholar Collin Koh said he believes the PLA is “starting to “normalize” its activities including drills east of the median line, adding to the pressure it has already exerted on Taiwan with its regular sorties into the island’s air defense identification zone (ADIZ).

An ADIZ is an area where civilian aircraft are tracked and identified before entering further into a country’s airspace.

“But the reactions of the Taiwanese people showed that the coercion doesn’t work well, although they conducted different activities at the same time, such as missile exercises, cyber attacks, fake news campaigns and so on,” Sheu said.