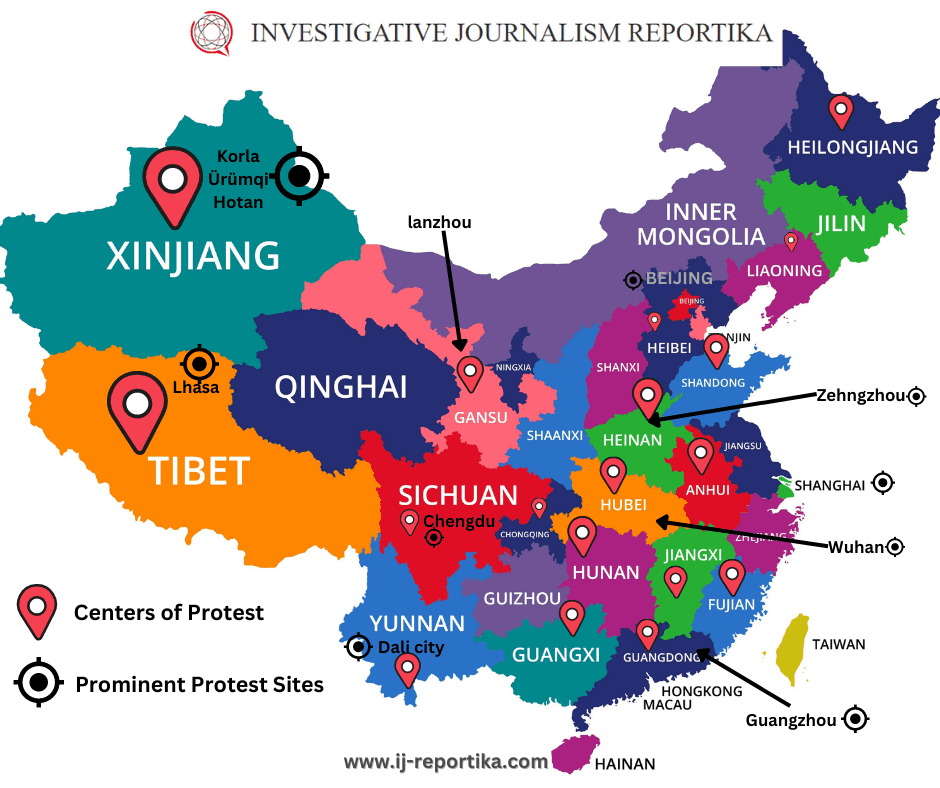 From Lhasa and Xinjiang to Beijing and Shanghai, protests have erupted across China in a rare show of dissent against the ruling Communist Party (CCP) sparked by anger over the country’s increasingly tormenting zero-Covid policy. The protests have taken the shape of a colossal rebellion with no parallels in the history of China.

As numbers surged at demonstrations in multiple major cities over the weekend, so too have the range of grievances voiced – with some calling for greater democracy and freedom. Now the rebellion has spread from some major cities to the hinterland.

Hundreds of protesters have even called for the removal of Chinese leader Xi Jinping, who for nearly three years has overseen a strategy of mass testing, brute-force lockdowns, enforced quarantine, and digital tracking that has come at a devastating human and economic cost.

Here is the timeline of the events that have taken place in China since the announcement of the 20th Party Congress of the CPC in October.

A solitary protestor hung two banners calling for Xi Jinping to be removed from office and exhorting the populace to “Be citizens, not slaves,” an extremely rare act of overt political defiance on the eve of the 20th Party Congress.

Peng Lifa hung the banners from the busy Sitong Bridge in Beijing’s northwestern Haidian district and lit a fire in an apparent bid to draw attention. Police later removed the banners. The red and white hand-lettered banner at left read:

“We want food, not COVID tests; reform, not Cultural Revolution. We want freedom, not lockdowns; elections, not rulers. We want dignity, not lies. Be citizens, not slaves.” The banner at right read: “Boycott classes. Boycott work. Depose the traitorous despot Xi Jinping.”

The 20th National Congress of the Chinese Communist Party (CCP)

The CCP General Secretary Xi Jinping secured an unprecedented third term as China’s top leader at the Congress. This was considered one of the major triggers for the rebellion by many experts

The Tibetan protests in Lhasa

Angry residents in Tibet’s capital Lhasa took to the streets to protest the harsh COVID-19 lockdown that Chinese authorities have imposed on them for more than three months.

They were the first major protests in the city since the 2008 Tibetan Uprising. Videos obtained by Ij-Reportika show scores of protesters on the streets. A daytime video shows people mostly standing or milling about, with officials in white protective suits standing nearby. In two nighttime videos, crowds and cars block a large street and the crowd surges forward while raising their voices.

As lockdowns returned to Zhengzhou, thousands of laborers working in Foxconn (China’s largest Apple iPhone manufacturer), fled the factory in China’s central province of Henan due to the lack of food and medical care.

Date:  15 November 2022 till now
Center of the protest: the Haizhu district

As lockdowns returned to Guangzhou in early November, residents of the Haizhu district marched in the streets at night, breaking through metal barriers and demanding an end to the lockdown.

Date: 22 November 2022 till now
Center of the protest: Zhengzhou

A labor uprising over COVID-19 restrictions and contract violations by Apple at Foxconn’s iPhone factory in central China unfolded in Zhengzhou. #LaborUprisingInChina trended for hours in many parts of the world on 23rd November 2022. People on social media showed sympathy towards the suffering laborers at the Foxconn iPhone factory.

Laborers and workers at Foxconn’s Zhengzhou factory held protests on the factory campus, where they have had to stay since a closed-loop system was announced to counter the spread of COVID-19 without compromising productivity under the Zero Covid policy.

Lone protest in Chongqing where a single man criticized the handling of COVID by the Chinese government. He criticized the Zero Covid enforcers and also held the policy responsible for skyrocketing prices of vegetables in Chongqing. The surrounding residents repeatedly applauded the man for raising his voice.

“there is only one disease in the world, that is, not having freedom and poverty. Now we have both of them in #Chongqing. We are still struggling with a small cold.”

The police wanted to use violence to arrest the man away and the man shouted “Help me”. Then the residents forcibly rescued the man from the police and cheered each other to send him away.

The man was dubbed online as the “Chongqing hero”.

Date: 24 November 2022 till now
Center of the protest: Urumqi

On 24 November 2022, a fire in a building in Ürümqi killed 44 people and wounded many in a residential area under lockdown. The Xinjiang region had already been in strict lockdown for three months at that point. During this time, videos and images circulated on Chinese social media showed people unable to purchase basic necessities such as food and medicine. People accused the lockdown measures around the building on fire of preventing firefighters from being able to reach the building in time, while others expressed anger at the government’s response, which seemed to victim blame those who managed to escape the fire.

On 25 November, people in Ürümqi marched in the streets in protest, demanding an end to the harsh lockdown measures. Huge protests started in the entire Xinjiang post this incident.

Date: 24 November 2022 till now
Center of the protest: Shanghai on Ürümqi Road

Chants of people of Shanghai

Videos circulating on social media also show the crowd facing police chanting slogans such as “serve the people,” “we want freedom” and “we don’t want the Health Code”. Some people sang the national anthem, “March of the Volunteers”, during the protest. In the early morning hours on the 26th of November, police suddenly surrounded the crowd and arrested several people.

Massive Protests in the Capital city

Date: 24th November till now
Center of the protest: Beijing

More than 3500 people gathered along Beijing’s third ring road to protest COVID restrictions and the deaths in Urumqi. The protests in Beijing are still gaining momentum and strength.

Date: 26 November 2022 till now
Center of the protest: Lanzhou

On 26 November, videos filmed protesters in Lanzhou destroying tents and booths for COVID-19 testing. Protesters alleged that they were put under lockdown despite there being zero positive cases in the area. Lanzhou is the same place where earlier in November, where a 3-year-old boy died before he could be taken to the hospital in time due to lockdown measures, sparking backlash and anger online.

Date: 26 November 2022 till now
Center of the protest: Wuhan

On 26 November, videos filmed thousands of protesters in Wuhan holding massive rallies in Wuhan protesting against the Zero Covid strategy. Wuhan is the same place where many experts allege that coronavirus originated.

Date: 27 November 2022 till now
Center of the protest: Wuzhen

People held rallies and showed themselves as chained slaves in Wuzhen in Zhejiang Province holding white papers in their hands.

Students of the university gathered to hold a candlelight vigil for victims of the fire by using phone flashlights as stand-ins for candles and holding up blank pieces of paper in reference to the censorship surrounding the event.

An unidentified man took the stage to rebuke the protesting crowd, saying that “one day you’ll pay for everything you did today”, with students replying that “the state will also have to pay the price for what it has done”.

On 27 November, students held a memorial at Tsinghua University in Beijing. They chanted “freedom will prevail” and sang “The Internationale”.

One teacher went through the crowd to the students, trying to dissuade the crowd, and said, “you’re getting out of hand!” A female student from Tsinghua University held up a blank paper and shouted slogans, crying, “If because we are afraid of being arrested, we don’t speak, I believe our people will be disappointed in us. As a Tsinghua student, I will regret this my whole life

Jinan University, the slogan “Let the people speak, the sky will not fall” sprayed on the wall by students was removed by the school security.

At the Jiangxi Agricultural University (near the gymnasium area), a protestor wrote “OK” on the wall symbolizing the extreme censorship in China and the lack of freedom. They also held a white paper protest at the University!!

Protests in other universities in China

Students of various universities in China organized protests by singing songs, the National Anthem of China, using Graffiti on the walls of the university to demand freedom and holding rallies. They also used the “white paper protest” which was used during the Hong Kong protests, symbolic of the protest against censorship.

In Zhengzhou the one who flipped the car was me, it was me who refused to get the covid test, it was me who walked 100 miles, finally jumping off the building it was again me, the one who was burned in the Xinjiang incident was me. If it’s not me, next definitely going to be me

In Taiwan, a vigil attended by around 80 to 100 people was held at Liberty Square in Taipei, Taiwan, in solidarity with the protests in China. Speakers included Wang Dan and Zhou Fengsuo, activists who participated in the 1989 Tiananmen Square protests.

Protests against the communist party and Xi Jinping have spread to various parts of Shanghai, Guangzhou, Beijing, Zhengzhou, Lanzhou, Lhasa, Hotan, Korla, Wuhan, and Urumqi. It is not only limited to the major cities but it has spread to the hinterland and smaller Chinese cities. We will keep our readers updated on the Rebellion in China in upcoming reports.