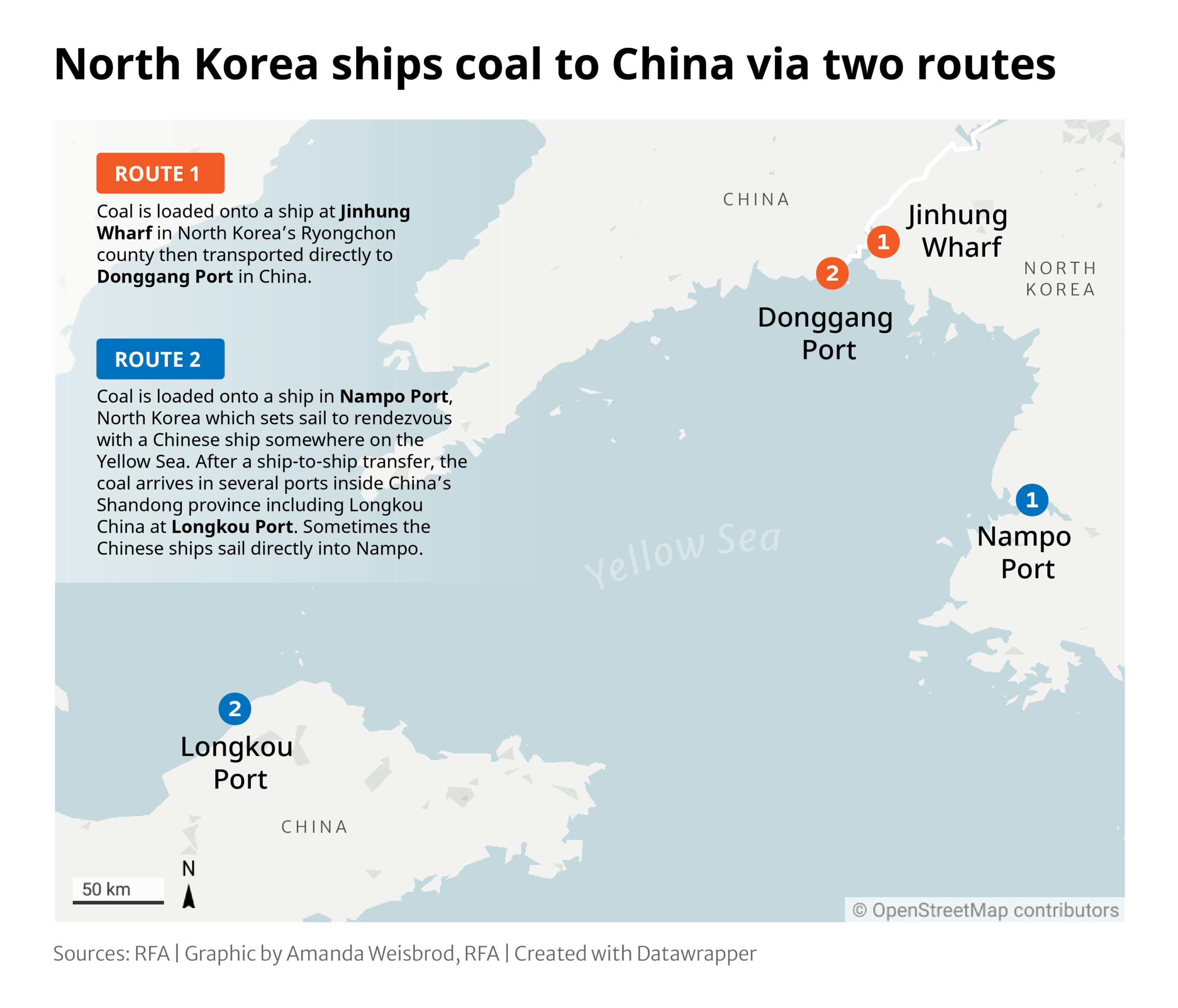 U.N. Security Council Resolution 2371, adopted in August 2017, forbids countries from buying coal that originates in North Korea. The sanctions are aimed at depriving Pyongyang of cash and resources that could be funneled into its nuclear and missile programs.

But China’s energy needs are great, and North Korea’s coal is of exceptionally high quality, so sales of coal stocks to Chinese buyers resumed in mid-July, a trade official in North Korea’s South Pyongan province, north of Pyongyang, told RFA’s Korean Service on condition of anonymity for security reasons.

“Trading companies affiliated with the party and the military resumed exporting coal to earn foreign currency on orders of the Central Committee,” said the source.

“Coal exported to China is transported from Nampo port to the West Sea,” the source said, referring to the body of water west of the Korean peninsula, known internationally as the Yellow Sea.

“It is common for the coal to be transferred from the North Korean trading company’s ships to  Chinese ships on the open sea,” the source said.

The ship-to-ship transfers are an effort to avoid detection, although monitors have known the sales have continued since the sanctions were imposed. In 2019, the U.S. Treasury penalized two Taiwanese citizens and three shipping companies for transferring petroleum products with North Korean ships on the high seas.

In October 2021 RFA reported that coal exports from North Korea to China, sometimes through ship-to-ship transfers, were on the rise as China struggled with severe coal shortages that led to rolling blackouts in many parts of the country.

Maritime trade between the two countries has been on and off during the coronavirus pandemic. It was off again after North Korea declared a “maximum emergency” in May when a major outbreak was traced to a military parade in late April. Authorities have apparently made an exception in the case of coal.

Some trading companies are getting bolder and forego ship-to-ship transfers entirely, the source said.

“Some of the powerful party-affiliated trading companies bring the Chinese ships into the port of Nampo, where they are loaded with coal and then sail directly to Chinese ports. They can receive the cash right there on the spot,” the source said.

“Foreign currency earned from coal exports is not deposited into the Foreign Trade Bank of the DPRK but is collected directly by the party.”

The coal shipped out of Nampo goes to various ports in China’s Shandong province, with Longkou being the most popular destination, sources said.

Coal is also transferred over a much shorter distance between Ryongchon county in the northwestern province of North Pyongan and Donggang, China, a trade official in North Pyongan told RFA on condition of anonymity to speak freely.

“These days, at Jinhung Wharf in Ryongchon county, military trading companies that have received permission to resume coal exports from the Central Committee are exporting coal through the sea,” he said.

“Powerful trading companies are earning foreign currency by exporting hundreds of thousands of tons of coal at a time by borrowing large ships from China,” said the second source.

A ton of North Korea’s high-quality anthracite coal can fetch between U.S. $100 and $110 in China, according to the second source. This is almost double the cost per ton quoted by sources in the RFA report from October 2021.

“Military companies are using the foreign currency they earn from coal exports to secure fuel for Border Guard patrol boats and warships and food for military personnel,” the second source said.

Sources told RFA that they were not able to determine if the resumption of coal exports is being carried out under any agreement with the Chinese government.

RFA contacted offices at the United Nations, including the U.S. mission to the U.N., by phone and email but had not received any response as of 4 p.m. Wednesday.

“We will continue to implement them and encourage others to fully implement them, including at the United Nations and with the DPRK’s neighbors,” the spokesperson said. “The DPRK continues to fund its WMD and ballistic missile programs through sanctions evasion efforts in violation of UN Security Council resolutions.”

“It is important for the international community to send a strong, unified message that the DPRK must halt provocations, abide by its obligations under UN Security Council resolutions, and engage in sustained and intensive negotiations with the United States.”