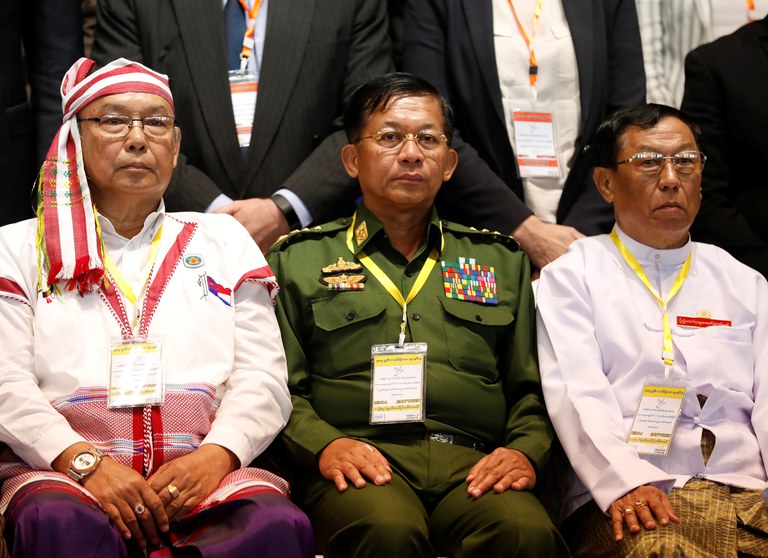 Myanmar’s four most powerful ethnic armed groups have rejected an olive branch from the junta, saying there can be no peace talks until the military regime allows the country’s shadow government and the paramilitary group that fights on its behalf to take a seat at the table.

On April 22, junta chief, Snr. Gen. Min Aung Hlaing, called for negotiations that he promised to personally attend and gave the ethnic armies until Monday to accept the offer. But the Kachin Independence Organisation (KIO), the Karen National Union (KNU), the Karenni National Progressive Party (KNPP) and the Chin National Front (CNF) all rejected the invitation. They said that by not offering all stakeholders the chance to participate, the junta showed it is unwilling to meet halfway.

“We recognize that political issues need to be addressed through a political dialogue,” KIA information officer, Col. Naw Bu, told RFA’s Myanmar Service, when asked about the decision not to register for the talks.

“We are not attending the meeting this time because it’s clear to us that we will not be able to reach a point at which we can discuss real political issues.”

The four ethnic armies are Myanmar’s largest, most experienced and best equipped, and together have accounted for some of the strongest resistance to military rule.

KNU spokesman Padoh Saw Tawney said that in addition to refusing to allow the shadow National Unity Government (NUG) and the prodemocracy People’s Defense Force (PDF) paramilitary group to attend talks, the junta had failed to honor commitments it had made to his and other ethnic armies, such as reducing its troop presence in their territories in the country’s remote border regions.

“If the talks are not held in an inclusive environment, the consequences will be indescribable for the country,” he said.

The junta has rejected requests from ethnic leaders and the international community to let the NUG and PDF participate in the talks. Min Aung Hlaing has repeatedly said that the junta will not talk with “terrorists,” and vowed to continue to crack down on the groups.

Padoh Saw Tawney said that if the military has good intentions, it should “leave politics” so that the rest of Myanmar’s stakeholders can form a federal democracy and begin the process of rebuilding the country.

“We cannot go without these preconditions,” he said.

Other ethnic leaders, such as KNPP First Secretary Khu Daniel, told RFA that peace talks without the NUG and PDF would be “meaningless,” and suggested that the junta peace offer was part of a bid to create a schism within the armed opposition.

“The NUG formed political alliances with our ethnic groups,” he said. “The junta intends to separate them from these groups. But without them, there will be no solution to this problem.”

Khu Daniel acknowledged that some ethnic armies had agreed to join in negotiations but noted that they have smaller forces and hadn’t made much headway in fighting against the military.

“Our groups, which are really fighting, are not attending. So, nothing will come out of it,” he said.

In addition to the KIA, KNU, KNPP, and CNF, the other ethnic armies to reject the invitation were the All Burma Students Democratic Front and the Lahu Democratic Union — two of the 10 groups that have signed a Nationwide Ceasefire Agreement (NCA) with the government since 2015.

The United Wa State Party, the Shan State Progressive Party, and the National Democratic Alliance Army (NDAA) have said they will attend the peace talks. So have the Arakan State Liberation Party, the Shan State Rehabilitation Council, the Karen National Peace Council, the Democratic Karen Army, the New Mon State Party, and the Pa-O National Liberation Organization — all of which are members of the Peace Process Steering Team (PPST) of NCA signatories.

The 10 groups that signed the NCA have suggested that the deal remains in place, despite an already flailing peace process that was all but destroyed by the unpopular junta’s Feb. 1, 2021, coup. Previously, all 10 said they would not pursue talks with the military, which they view as having stolen power from the country’s democratically elected government.

PPST spokesman, Col. Saw Kyaw Nyunt, said his group decided to accept the junta invitation with the hope that it would lead to broader negotiations.

“It’s a start with the aim of finding a way to have inclusive talks,” he said. “We’ll try to determine how to create such an inclusive political environment, even though we have not yet held a political dialogue to build a federal democratic union.”

The three northern alliances — the Kokang National Democratic Alliance, the Ta’ang National Liberation Army and the Arakan Army — have said they are still negotiating among themselves over Min Aung Hlaing’s offer.

Speaking to RFA at the end of last week, junta deputy information minister, Maj. Gen. Zaw Min Tun, told RFA that “most” of the ethnic armed groups had accepted the invitation.

“Some groups have issued statements saying they will not attend, and we are waiting for others to make their decision,” he said.

Zaw Min Tun said the junta is committed to pushing the peace process forward, adding that it is willing to “openly discuss the establishment of a union based on democracy and federalism.”

Naing Htoo Aung, permanent secretary of the NUG’s Defense Ministry, said that 15 months after seizing power, the junta has led Myanmar to ruin, and its rule is in jeopardy.

“The junta is not doing well militarily, politically, or economically … so, I think they are making a fake peace invitation as an effort to buy time,” he said.

“Unity among the revolutionary forces right now is unprecedented. That’s why [the military] hopes to create misunderstanding between them.”

“The main reason they did not take the offer was not that because they don’t want to hold talks. What they want is a dialogue that leads to real peace,” he said.

“They are not attending because they don’t believe it is an invitation with a genuine desire for peace. The trust has been shattered.”

The military has made 12 invitations to the country’s armed ethnic groups since the February 2021 coup, but the April offering marked the first time Min Aung Hlaing said he would attend.