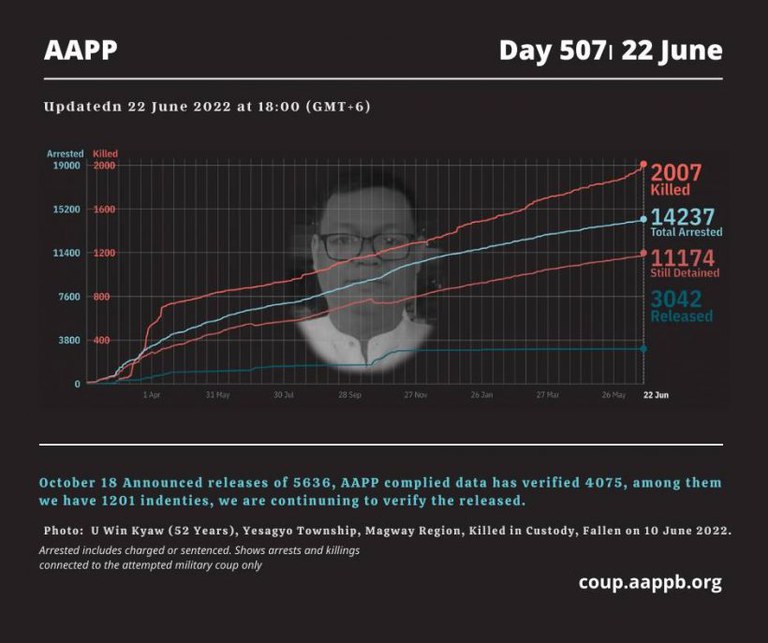 The toll of civilians who died at the hands of Myanmar’s military junta since it overthrew the country’s elected government 16 months ago reached 2,000 this week and is rising, according to a Thai-based activist group that has closely tracked deaths

The Assistance Association for Political Prisoners (AAPP) said the milestone of 2,000 deaths since the Feb. 1, 2021 coup was reached June 20 and that recent deaths in anti-junta hotbeds Sagaing and Magway regions had pushed the figure to 2007.

“This is the number verified by AAPP. The actual number of fatalities is likely much higher,” the AAPP said in a statement.

The 2,000 deaths were memorialized by the U.S. and EU diplomatic missions in Yangon, with Brussels’ office posting a black cover on its social media page to express its condolences and Washington calling for accountability.

“The inhumane atrocities committed by the military against the people of Burma across the country are a result of the lack of accountability among responsible persons on the part of the military. It highlights the urgent need for accountability,” the U.S. Embassy said.

The AAPP report came five weeks after Institute for Strategy and Policy (ISP Myanmar), a local think tank, said in a report that it had documented at least 5,646 civilian deaths between the Feb. 1, 2021, coup and May 10.

The ISP figure included people killed by security forces during anti-junta protests, in clashes between the military and pro-democracy paramilitaries or ethnic armies, while held in detention, and in revenge attacks, including against informers for the regime.

At least 1,831 civilians were killed in shooting deaths, the largest number of which occurred in war-torn Sagaing region, where junta troops have faced some of the toughest resistance to military rule in clashes with People’s Defense Force (PDF) paramilitaries that have displaced tens of thousands of residents since the coup, the ISP report said.

“People are seen as criminals and arrested illegally. People are tortured and killed. Whole villages are set on fire,” he told RFA Burmese.

“The current AAPP list shows 2,000 deaths. In fact, there are more than that.”

The military has disputed or rejected the figures released by NGOS.

Junta-controlled newspapers said last month that 2,796 non-combatants had been killed between the coup and May 15.

The military proxy Union Solidarity and Development Party said 3,107 people have been killed after being accused of being military informants, 690 people died in armed clashes and 18 were slain by the pro-junta militia Thway Thauk, or Blood Comrades.

Coup opponents in Yangon told RFA they were still committed to resisting the military regime.

“The military made arbitrary arrests and detentions and tortured and killed peaceful protesters,” said a member of a Yangon-based protest committee who used the name Jewel for security reasons.

“As a result, this revolution has been going on for more than a year, with the conviction that the military dictatorship must be uprooted,” she said.

“No matter how much the people have lost, we see that this is the last game and I will continue to fight with this in mind,” added Jewel.

Kyar Gyi, a spokesman for the Htee Chaing Township PDF, said the army would continue to arrest and kill anyone who opposed the junta.

“It is routine for them to arrest or kill anyone who opposes them. They are still doing it. Homes are being set on fire and people killed,” he told RFA.

“We will continue the fight as long as it takes for the military dictatorship to fall.”