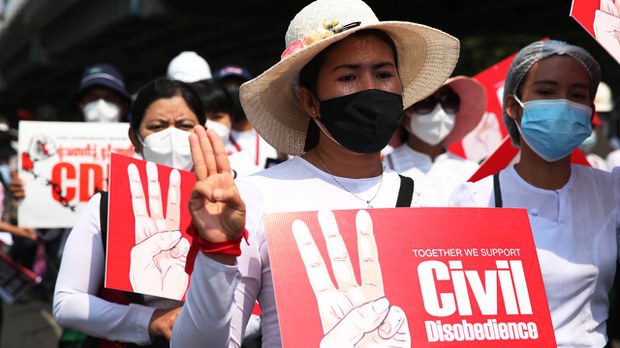 Myanmar’s Civil Disobedience Movement (CDM), a popular strike movement that at its peak brought the administrative machinery of the military regime to a halt, has lost more than one-third of its active members amid a crackdown by the junta, organizers and the country’s shadow government said Tuesday.

Formed by doctors in Mandalay a day after the Feb. 1, 2021, coup, the CDM once boasted more than 360,000 members who chose to walk away from their state jobs and take part in peaceful anti-junta protests or other opposition activities in a bid to pry loose the regime’s grasp on power. The CDM captivated the international community for its effectiveness in the face of the junta’s violent repression and was even nominated for the 2022 Nobel Peace Prize.

But Kyaw Zaw, a spokesman for the shadow National Unity Government’s (NUG) President’s Office, told RFA’s Myanmar Service that the number of active members in the CDM has dwindled significantly since the junta began to target them with a campaign of threats, arrest, and other forms of harassment.

“CDM members have been arrested. They have endured many kinds of threats, and even torture in some cases. Furthermore, when CDM staff evade arrest, authorities detain their family members,” he said.

“Many CDM members felt insecure to a point that they had to leave the movement.”

Kyaw Zaw said the NUG estimates there are currently around 200,000 state employees still in the CDM, although “we don’t know exactly how many have left the movement.”

The shadow government’s assessment suggests that the CDM has lost more than 150,000, or slightly more than 40%, of its peak membership.

CDM sources told RFA that the junta also tries to lure CDM members away from the movement by making them offers that include reinstatement to their former jobs and guarantees that they will not be sent to prison. But they said those who refuse are often arrested on what they called “bogus charges” or can have difficulty earning a living due to policies such as a ban on hiring CDMs in the private sector.

Hein Thiha, a senior CDM teacher from Magway region, said some of his colleagues had left the movement after receiving threats.

“Your ability to participate can be different based on whether you are based in an area with a strong CDM or a weak CDM,” he said. “Where the CDM is strong, it is easier to operate. But it’s very difficult where the CDM is weak. Some people have reluctantly withdrawn from the CDM because of these pressures.”

Hein Thiha said that, like many CDM employees, he has been struggling to make ends meet as a farmer since February 2021 with no source of regular income.

Sit Min Naing, a CDM doctor, told RFA that public support for the movement appears to have shifted to the armed opposition since the NUG declared war on the junta in September and ordered allied prodemocracy People’s Defense Force (PDF) paramilitary groups around the country to attack military targets.

“This support grew stronger and stronger, and now they seem to have forgotten about the CDMs,” he said.

In its first annual report issued on April 16, the NUG said it had provided 229 million kyats (U.S. $190,000) in financial support to CDM staff. But NUG officials said at a press conference accompanying the release of the report that they had shifted the focus of their financial support to military expenditures and acknowledged that doing so had likely led to a decline in the number of CDM members.

One of the few civil servant groups to grow the ranks of the CDM in recent months is that of the country’s security forces, according to the People’s Embrace — a faction within the movement that is made up of former junta soldiers.

CDM Capt. Lin Htet Aung told RFA that former members of the security forces who have joined the movement now number around 10,000, which he said is partly because they no longer want to be complicit in the junta’s killing of civilians.

“We realize we are fighting against the population. We are killing people and they hate us. We don’t have the support of the people anymore,” he said.

“We realize we are working to benefit the personal interests of the military leaders and not in the national interest. … This has led to a steady increase in deserters.”

Lin Htet Aung said more people would leave the military and the police force if their security could be guaranteed.

Meanwhile, relatives of members of the security forces told RFA that the junta has tightened restrictions inside the military and police force in a bid to dissuade potential deserters, including by restricting their access to friends and family.

“In some cases, there have been terminations … but these actions were taken according to existing staff regulations,” he said.

“However, in cases where [CDM staff] are found to have incited people during protests, they will be punished according to the law.”

According to Thailand’s Assistance Association for Political Prisoners, there are around 100 CDM staffers serving prison sentences in Myanmar and at least 886 in detention.

Myanmar-based political analyst Sai Kyi Zin Soe told RFA that the CDM will continue to lose members if they cannot be guaranteed personal and financial security.

“After more than a year, we can say the CDM is losing steam,” he said. “This is because many employees in the CDM already must risk their lives for the movement. Things become untenable if they are also unable to earn enough to live.”