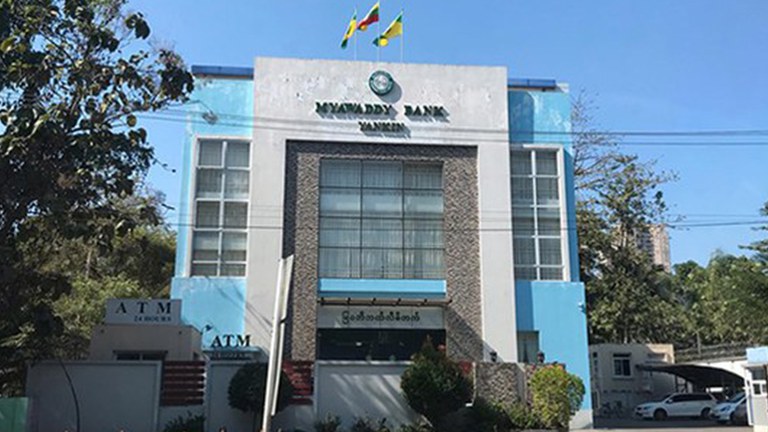 Recent moves by the Central Bank of Myanmar to promote cooperation between military-owned lenders and their Russian counterparts suggest the junta is seeking more than financial ties to the Kremlin and may be brokering a back channel for arms deals, analysts said Wednesday.

In an April 25 letter, the Central Bank of Myanmar told the Myanmar Banking Association that five Russian banks will hold talks this month with local lenders, including the military backed Innwa and Myawaddy banks.

The letter, which did not say which banks would be involved in the talks, may signal that the two junta-linked lenders plan to act as conduits for military purchases of Russian weaponry, economic and political analysts said.

A Myanmar-based economist, who spoke on condition of anonymity citing security concerns, told RFA’s Myanmar Service the junta’s plan to link with Russian banks was part of a bid to show that its ties to Russia run “beyond economic ones.”

He said establishing political and military ties to other larger nations is key to the junta’s survival at a time when the military leadership is being ostracized by the international community over its Feb. 1, 2021, coup and subsequent violent repression of opponents to its rule.

According to the Bangkok-based Assistance Association for Political Prisoners, security forces have killed at least 1,821 civilians and arrested 10,526 more in the 15 months since the military seized power from the democratically elected National League for Democracy government, mostly during peaceful anti-coup protests.

An arrangement to procure arms via the two banks stands to benefit both Russia, which has been increasingly cut off from the global financial system in the wake of its invasion of Ukraine, and the junta, whose arms suppliers have faced criticism for providing the regime with weaponry used to repress opponents to its rule.

In March, the rights group Justice For Myanmar said in a statement that as a major supplier of arms and dual use goods to Myanmar’s military, Russia is “aiding and abetting the military’s genocide, war crimes and crimes against humanity,” and called for international action to stop the trade.

It called for sanctions against 19 companies that it said have supplied Myanmar since 2018, including multiple subsidiaries of the Russian state-owned arms giant, Rostec, as well as manufacturers of missile systems, radar and police equipment. The group said many of the companies it identified have exported to Myanmar since the coup.

When asked for comment, junta deputy minister of information, Maj. Gen. Zaw Min Tun, told RFA that last week’s letter to the Myanmar Banking Association was related to boosting trade between Russia and Myanmar and had “nothing to do with arms.”

“Russia wants to increase links in the trade and energy sectors, and [cooperation in] other sectors will follow,” he said. “[Myanmar’s] banking sector must be upgraded so businesses can grow. Foreign currency is not based on U.S. dollars alone.”

Zaw Min Tun noted that recent inter-governmental initiatives between Beijing and Naypyidaw had established a system for trade through the direct exchange of Chinese yuan for Myanmar kyats. He said the junta is working to create a comparable system for trade with Myanmar’s neighbors Thailand and India.

“Similarly, we are now working to facilitate trade between [Russia and Myanmar] with a direct exchange of the ruble and the kyat,” he said.

The minister said that all purchases of arms are made on a government-to-government basis, adding that the need to establish banking links stems from junta plans to purchase energy from Russia, as well as import fertilizer from and export agricultural products to its Republic of Tatarstan.

An official with a private bank in Myanmar, who declined to be named, told RFA that the Central Bank’s letter could indicate a strategy shift in line with Zaw Min Tun’s stated goals for the junta.

“Before this Russian issue, there was the China Initiative … and you can now transfer money to China by going to the nearest Myanmar bank,” they said.

“Now they are planning the same thing with Russia for a direct exchange between kyats and rubles. … So, there will be more countries that can use rubles as well as Myanmar’s currency. There will be more channels for all countries close to China and Russia to make their monetary system easier.”

In October 2021, a delegation of the Russia-Myanmar Friendship and Cooperation Association visited Myanmar and met with Than Nyein, the governor of the Central Bank of Myanmar. Observers have said that the meeting could set the stage for linking the two countries’ banking systems as part of a bid by the junta to improve Myanmar’s banking sector.

However, another official with a private lender in Myanmar, who also spoke anonymously, said that the junta is better off looking for other countries to work with, both because of Russia’s relatively poor economy and the stigma associated with its invasion of Ukraine.

“I don’t think any private banks will get involved in this [initiative]. Myawaddy and Innwa are half-owned by the government, so I think only those banks will be involved,” they said. “Linking with these Russian banks is not going to bring much benefit. Other countries would have already done so if that was the case.”

“I don’t think Innwa and Myawaddy Banks can accomplish much just by opening an account in Russia, but it might benefit them if they could open branch offices there or the Russians opened a branch office here,” he said.

“There may be other purposes at play. Of course, it is better to have more channels to choose from than to rely on [the U.S. dollar] alone. But we can’t just ignore the dollar, which is accepted all over the world. We can’t demote it to the second place — that’s the reality.”