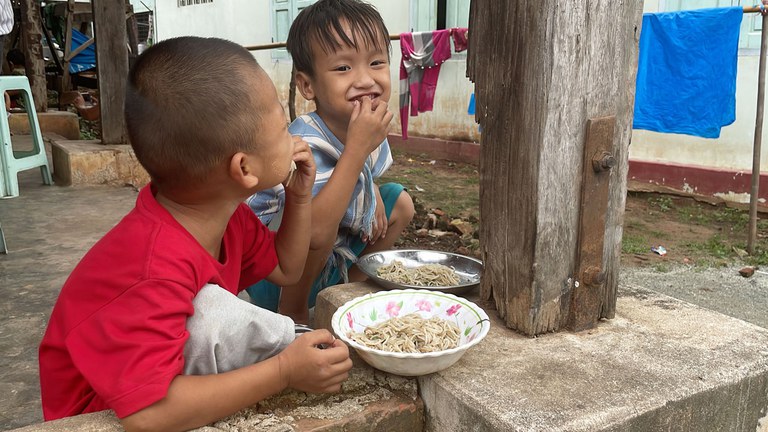 More than 200,000 children have been displaced by fighting in Myanmar’s war-torn states of Kayin, Kayah and Rakhine since the military took control of the country in a February 2021 coup, according to data compiled by rights groups, NGOs, and anti-junta forces.

Beyond the psychological trauma they experience, children are vulnerable to military airstrikes and at risk of capture by junta troops, who press them into forced labor, use them as human shields and sell them as sex slaves to human trafficking rings, the Karen Human Rights Group, or KHRG, said in a report released Tuesday.

Pregnant women and babies are also caught up in the conflict. “Pregnant women fleeing the war have no choice but to give birth in caves in the forest, unsheltered from the elements out in the open, or along riverbanks,” said Saw Nanda Soo, a spokesperson for the group.

“Since they are on the run, they are entirely deprived of health care and supplies such as diapers, baby formula and medicine,” she said.

All told, the fighting between junta military forces and various rebel groups has created more than 350,000 people who are internally displaced, more than half of them under the age of 18, the group said. And of those minors, more than half are girls.

The vast majority of the displaced children, or about 175,000 of them, have fled their homes in Kayin state, which borders Thailand in southeastern Myanmar, the KHRG report said. Aid groups said that a combined 50,000 children have been displaced in Kayah, just north of Kayin state, and in Rakhine, in the west, near Bangladesh.

No concrete numbers have been provided for the number of children displaced since the coup in Sagaing region in the northwest, which has seen some of the worst fighting between the military and anti-junta groups. The United Nations recently announced that at least 500,000 people have fled conflict in Sagaing in the past 20 months.

A member of the Kayah State Basic Education Teachers Union told RFA that more than 30,000 children have become displaced in the region since the military takeover, and are forced to study in makeshift camps or while sheltering in the jungle.

“Artillery shells hit us every day and you never know when another one will come,” the union member said.

“Our children were denied [proper] education for an entire year due to COVID-19 [school closures] and then another because of the [insecurity following the] coup. We can’t just stop learning, so we must teach them on the run.”

The union member said that they are constantly on the move, and when they reach somewhere deemed temporarily safe, they resume teaching. “We’re stuck in a cycle of running and learning.”

In the western state of Rakhine, the rebel group Arakan Army reports similar numbers. In just the past two months, at least 20,000 children have become displaced since fighting resumed with the military after a two-year lull. That’s on top of the 82,000 children who had already been driven from their homes.

The rebel group said that the internally displaced people in Rakhine are housed in more than 150 different camps, where some 10,000 children attempt to continue their studies despite the regional violence.

‘Biggest loss in our children’s education’

Zaw Zaw Tun, a humanitarian volunteer in Rakhine, said the junta soldiers fire artillery into their villages and then sweep into the villages, arresting residents. “Many of us are constantly on the run due to regional insecurity, rather than any specific battle,” the volunteer said.

“The biggest loss is our children’s education. Meanwhile, food is scarce and we are dealing with health issues such as the seasonal flu now that it is turning to winter.”

Regional support groups say it has become increasingly difficult to gather accurate statistics for the number of people displaced by fighting throughout the country since the coup because the junta is actively blocking international humanitarian groups from assisting them.

The junta has yet to respond to reports of the scale of displaced children and the risks they face while on the run.

On Oct. 10, Kyaw Moe Tun, Myanmar’s Permanent Representative to the United Nations, told the U.N. General Assembly that since the coup, the junta has killed at least 2,338 civilians, including 91 children under the age of 14 and 209 children between the ages of 15 and 18.

He said that children in Myanmar have been particularly affected by the conflict under military rule and are regularly deprived of their rights.

According to data from the United Nations High Commissioner for Refugees, or UNHCR, there are 89 million refugees worldwide, 36 million of whom are children. In Myanmar, the refugee agency said, at least 1.3 million children have been displaced since the coup, compared to around 300,000 beforehand.

Meanwhile, in the central Bago region, 2,000 people have fled the conflict between the military and Karen National Union (KNU) since this February.

The physical and mental health of those who are displaced are rapidly deteriorating, said Saw Maung Maung, a volunteer in Taungoo, adding that aid groups are facing shortages as donations dry up. “The donors are running out of patience,” he said.

“There is a scarcity of food and other necessities needed for the refugees. We are in a difficult situation and have had to find ways to connect with other organizations to meet our long-term needs,” he said.

Saw Htoo Htoo, a displaced 9-year-old in Taungoo, said he was forced to flee his village in Kyaukkyi and take shelter in the jungle for about a week after “fighter jets roared overhead, shooting at us repeatedly.”

“I was barefoot from the start… In the rain, I was nearly eaten alive by the mosquitoes … Soldiers were always hunting us as we ran and we were constantly shaking with fear,” he said. “We had to run for our lives, but at least now we are more secure in Taungoo and can even enjoy playing with each other.”