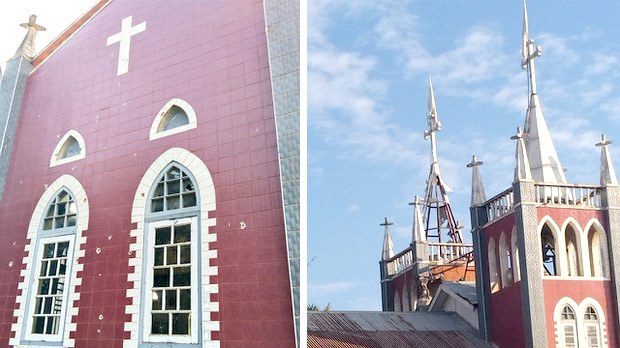 Nearly 100 religious buildings have been destroyed in two regions and two states in Myanmar more than a year after the military seized control from the elected government and plunged the Southeast Asian country into chaos and violence, according to data compiled by RFA.

In some cases, soldiers raided the religious buildings and beat locals who had taken shelter there.

Zaw Zaw, a resident of Pale township, said Buddhist monks there are being fed by locals offering alms after military troops raided villages and robbed and torched their monasteries.

“They were swearing at the Buddhist monasteries [and] fired several shots into the air,” he said. “They seized cell phones from the monks at the gunpoint. They also robbed civilians who took shelter in the monasteries of their money, gold and jewelry.”

Whenever a military detachment entered Zaw Zaw’s village, residents remained behind closed doors and did not go to the monastery to offer alms to the monks, he said.

“Even Buddhist monks are on the run,” Zaw Zaw added.

Other civilians told RFA that they have been appalled to see bullet holes and other damage from bomb blasts on Buddhist pagodas that serve as landmarks in many small communities.

Locals used to take shelter in monasteries when military units arrived in their villages, but now these places are no longer safe, they said.

Soldiers no longer honor religious buildings in the Buddhist-majority nation because they only want to ensure they maintain power, said a member of the People’s Defense Force (PDF) in Yesagyo township in Magway region who wanted to remain anonymous for safety reasons.

“They also prosecute and assault the people,” said the PDF member. “They will do the same thing to the sacred buildings of any religion. They won’t be reluctant to destroy anytime.”

Largely Christian Chin state in western Myanmar has had 62 religious structures destroyed — the largest number of such of any single state or region since the military takeover — including 22 that were burned to ashes, and 20 more destroyed by artillery blasts, according to the Institute of Chin Affairs, a human rights organization.

The Rev. Dennis Ngun Thang Mang said some of the churches destroyed were on fire though there were no armed conflicts in their vicinity, and when he and other asked the military about the blazes, they claimed they didn’t know anything about it.

Additionally, military forces arrested 20 Christian ministers. While a dozen of the captives were later released, four remain in detention and four were killed, the Institute of Chin Affairs said.

In Loikaw, Demoso and Hpruso townships of Kayah state, three Baptist churches, 10 Catholic churches and a mosque have been destroyed.

“During the armed conflicts in Kayah state, most of the bombs from air raids and artillery blasts fell inside the compound of the churches,” he told RFA. “That’s why many churches were destroyed.

“We don’t know why they did it,” he said. “We strongly condemn their actions. We want to appeal them to avoid targeting religious buildings.”

“The Tatmadaw never targeted any religious buildings,” he said, using the Burmese name for the Myanmar military. “There were incidents of raiding them when we received credible information that terrorists were hiding in the buildings.”

In cases where monasteries and churches were accidentally hit by military fire, soldiers took the lead in helping to repair them, Zaw Min Tun said.

“Religious buildings and sacred places are icons of religious freedom,” he told RFA. “They should not be assaulted or destroyed, even by society’s norms. But targeting religious buildings in armed conflicts and firing weapons at them are horrible acts.”