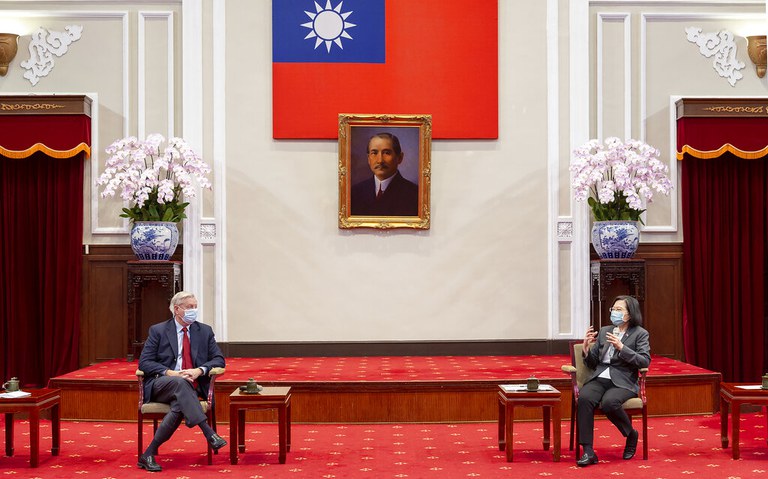 The Chinese military conducted a large multi-force exercise on Friday morning around Taiwan, just hours after U.S. lawmakers arrived for a visit to show support for the self-ruling island and meet President Tsai Ing-wen.

Chinese military aircraft, warships and troops were taking part in the combat readiness drills in the East China Sea as well as in the sea and airspace around Taiwan, according to a statement from Col. Shi Yi, spokesman for the Eastern Theater Command of the People’s Liberation Army (PLA).

The PLA statement said the drills were being conducted “in response to the recent wrong signals the U.S. sent related to the Taiwan issue.”

“The U.S. wicked tricks are completely futile and very dangerous,” it said, adding “those who play with fire will set themselves on fire.”

The Taiwanese Ministry of National Defense responded that its naval ships and aircraft have been dispatched to closely monitor the cross-strait situation and safeguard the security in “our airspace and territorial waters.”

The delegation met Friday with President Tsai. The U.S. lawmakers voiced support for the self-governing island and its democracy. Menendez described Taiwan – which China regards as a renegade province– as a “country of global significance” and said its security has implications for the world.

The previously unannounced visit came after reports last week that U.S. House of Representatives Speaker Nancy Pelosi was planning a landmark visit to Taiwan but had to postpone it after she tested positive for COVID-19.

Such visits are sensitive because Washington and Taipei do not have formal diplomatic relations, although they do have substantial ties and the U.S. is committed by law to help provide Taiwan with the means to defend itself.

Chinese Foreign Ministry spokesperson Zhao Lijian told reporters in Beijing on Friday that China “firmly opposes any form of official interaction between the U.S. and the Taiwan region” and confirmed that the military drills were a response to the lawmakers’ visit to the island.

Taiwan’s Foreign Ministry issued its own robust statement late Friday in response to the Chinese drills, saying “the threat of force … will only strengthen the will of the Taiwanese people to defend freedom and democracy.”

“Democratic Taiwan will continue to deepen cooperation with the United States and other like-minded countries, safeguard the security of the Taiwan Strait and the free and open Indo-Pacific region, and prevent the continuous expansion of the totalitarian government of the Chinese Communist Party,” the statement said.

On Thursday, U.S. National Security Advisor Jake Sullivan said at a meeting at The Economic Club of Washington D.C. that it is U.S. policy to ensure that a Chinese invasion of Taiwan does not occur.

China is watching the war in Ukraine closely and some observers fear that Beijing may consider opportunistic moves against Taiwan, which it seeks to unite with the mainland, by force if necessary.

During the drills on Friday morning, PLA Air Force Su-35 fighter jets flew over the Bashi Channel south of Taiwan in formation with H-6K strategic bombers.

Qi Leyi, a Taipei-based military analyst and commentator for RFA Mandarin Service, said: “Whenever the U.S.-Taiwan relations advance, the PLA has a corresponding military response. Beijing’s worried that Taiwan and the U.S. are entering a quasi-alliance.”