Located at the confluence of Hellenistic and Indian cultures, Mes Aynak near Kabul was once a vast city organised around the extraction and trade of copper.

The site of Mes Aynak possesses a vast 40 ha (100 acres) complex of Buddhist monasteries, homes, over 400 Buddha statues, stupas and market areas. The site contains artifacts recovered from the Bronze Age, and some of the artifacts recovered have dated back over 3000 years. As its name suggests, the presence of copper at Mes Aynak has been known about for some time, while the site’s archaeological wealth had been discovered by Russian and Afghan geologists in 1973–74.

Mes Aynak was at the peak of its prosperity between the 5th and 7th centuries AD. A period of slow decline began in the 8th Century, and the settlement was finally abandoned 200 years later.

Archaeologists believe that Mes Aynak is a major historical heritage site. But the need for the Taliban, who returned to power in August last year, to find new revenue streams after international aid was frozen has made mining the project a priority, and could put an end to further archaeological work. 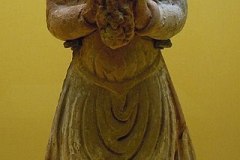 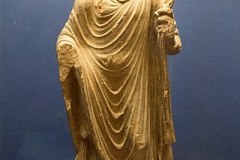 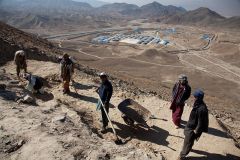 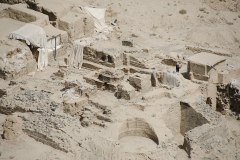 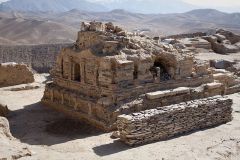 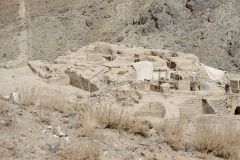 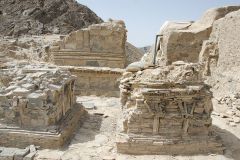 In November 2007, a 30-year lease was granted for the copper mine to the China Metallurgical Group (MCC) for US$3 billion.

Fifteen years later, the mine still does not exist — insecurity and disagreements between Beijing and Kabul over financial terms of the contract have caused delays. The project is once again a priority for both parties.

All of this historical material is in imminent danger of destruction by the mining endeavor. Many experts are comparing the Chinese mining company to those who destroyed the Buddhas of Bamiyan.

Despite the imminent danger, negotiations between Afghanistan’s new Taliban government and China’s state-owned MCC and its publicly listed subsidiary Metallurgical Corp. of China are underway over the resumption of mining activity at the Mes Aynak Logar copper project.

Discussions in the final stage

The discussions are about “80% finished“, says the Taliban spokesman, with only technical points remaining to be settled, which should be done soon.

The Taliban are demanding that the contract, which includes the construction of a power station to supply the mine and Kabul, and a railroad to Pakistan, be respected. They also insist that the copper be processed locally with an Afghan workforce.

China, whose economy is in dire need of copper, is reluctant to meet these demands. MCC, which did not respond to AFP, also continues to demand a reduction in royalties due.

Will Taliban preserve the site?

When it was last in power the Taliban shocked the world by dynamiting the giant Buddhas of Bamiyan in March 2001, but today they say they are determined to preserve the findings of Mes Aynak.

But while the rhetoric seems sincere, many of the remains are simply too bulky or fragile to be moved and seem destined to disappear.

The Chinese favors open-pit rather than underground mining. If this goes ahead, it would open up the copper mountain and bury all the fragments of the past.

The Taliban hope to earn more than $300 million a year from Mes Aynak. This is about 60% of the full state budget for 2022. Therefore, it wants to speed up the process undermining the environmental consequences and cultural values attached with the place.

Mes Aynak can be a World Heritage Site

So instead of destroying a potential UNESCO World Heritage Site with emotional and cultural connect of the Buddhist World, it should be preserved as a Buddhist Civilizational Wonder of the world.