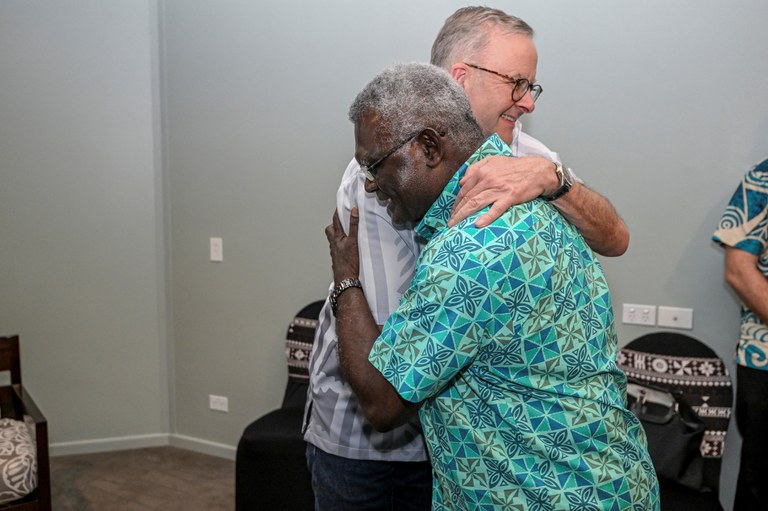 Solomon Islands Prime Minister Manasseh Sogavare has maneuvered himself to the center of U.S.-China rivalry in the Pacific, stirring debate about his aims.

To some, he’s an autocrat in waiting, and to others, a smart operator seeking to maximize aid for his volatile and economically-lagging nation.

A Seventh-Day Adventist who has a martial arts black belt, Sogavare is also a political brawler whose fortunes have fluctuated over the years alongside the frequent strife of Solomon Islands politics.

After rising through the civil service in the 1990s, he is now in his fourth stint as prime minister. His first term, from June 2000 to December 2001, followed a coup, though he was elected by parliament – part of a chaotic period that resulted in a years-long military intervention in the Solomon Islands led by U.S. ally Australia.

Over time, Sogavare has become more adept at marshaling the levers of power in his favor, researchers say. Earlier this year he pushed a constitutional amendment through parliament that allowed elections, set for 2023, to be delayed on the basis the country couldn’t afford a national vote and a major sporting event – the Pacific Games – in the same year.

“He is totally driven by the desire to remain PM forever,” said Matthew Wale, leader of the opposition in the Solomon Islands parliament. “He grants the demands of anyone who will help him achieve that.”

Sogavare, 67, has increasingly tilted the government of the South Pacific archipelago of some 700,000 people towards China. In 2019, he switched diplomatic recognition to China from Taiwan – an unpopular move in the country’s most populous province, Malaita – and earlier this year, he signed a security pact with Beijing.

China is helping to bankroll the Pacific Games in the Solomon Islands capital Honiara next year and is training the country’s police. Last weekend, more than 30 Solomons police officers headed to China for a month’s instruction in policing methods.

Meanwhile, Sogavare signed up to a pact between Pacific island nations and the United States at a summit in Washington last month, in what one observer described as a pragmatic move.

“It’s not zero-sum for Sogavare, rather it’s about maximizing the potential benefits he can bring to his country. So pragmatism is the main driver, but there is also a personal element when push comes to shove.”

Sogavare can seem a mercurial and perplexing figure to outsiders, and even for researchers and others who have spent years in the Solomon Islands. His office didn’t respond to a request for an interview.

At a regional meeting in July, Sogavare effusively greeted Australian Prime Minister Anthony Albanese with a hug following months of tensions with Australia, the largest donor to the Solomon Islands.

But within weeks, Sogavare was threatening to ban foreign media from the Solomon Islands, after critical Australian coverage of its China links, and lashing out at perceived Australian government interference. Canberra had offered, clumsily, some analysts say, to pay for the Solomon Islands elections.

In his address to the United Nations General Assembly last month, Sogavare said the Solomon Islands had been vilified in the media for joining most other countries in recognizing China. He also urged the United States to end its embargo on Cuba and thanked the Cuban government for training Solomon Islands medical students.

Sogavare credits his formative political ideas and skills to Solomon Mamaloni, a charismatic Solomon Islands leader who died in 2000. A staunch nationalist and man of the people who chewed betel nut and drank heavily, Mamaloni distrusted the West, Australia in particular, and U.S.-dominated institutions such as the International Monetary Fund and World Bank.

Sogavare became Mamaloni’s protege in the late 1990s. Sogavare believed he was in contact with Mamaloni after his death, according to a biography of Mamaloni by Christopher Chevalier, and other sources.

“He was like a father to me, I was like his son and he taught me many things,” American anthropologist Alexis Tucker Sade quotes Sogavare as saying of Mamaloni in her 2017 doctoral dissertation on the Solomon Islands.

In an interview with Tucker Sade, Sogavare described a four-hour encounter in his government office with Mamaloni’s spirit, one of a number of supernatural encounters with the former prime minister that Sogavare claimed to have had in the decade following his death.

He also acknowledged being a heavy drinker around the turn of the century. Nowadays, he is widely said to abstain from alcohol.

Sogavare’s seances are not out of the ordinary in the Solomon Islands, where strong traditional beliefs are mingled with Christianity’s emphasis on the afterlife, said Chevalier.

“He is his own man. But I don’t think he has forgotten the lessons of Mamaloni,” Chevalier said. “He has obviously learned how to strategize and how to bring people on board in the very complex horse-trading that goes on.”

Not everyone in the Solomon Islands views the connection with Mamaloni positively. The former leader sought a strong and independent Solomon Islands, but his legacy, which at the time of his death included a country mired in corruption and ethnic strife, is debated.

“Some people may say Mamaloni is some kind of a political savior to them,” said Celsus Irokwato, an adviser to the premier of Malaita province. “I see him as one of those who have set the stage for the failures of Solomon Islands.”

Sogavare stands out because he is unpredictable and doesn’t conform to local cultural norms for leadership, based on respect earned from constant community involvement, said Clive Moore, an emeritus professor at the University of Queensland and author of an encyclopedia of the Solomon Islands.

Sogavare’s parents were missionaries from the island of Choiseul in the Solomons, but he spent much of his early life in Papua New Guinea, where he was born in 1955, and in the Solomon Islands capital Honiara.

“He doesn’t behave in a traditional manner. He’s a bit of a bully, I think, in the way that he yells at people, the way he yells in the parliament,” said Moore.

With his tilt to China, Sogavare may reap short-term political benefits such as from a successful staging of the Pacific Games, Moore said. But he could be storing up crises if increased Chinese involvement in the country results in economic domination rather than new skills, jobs and higher living standards for Solomon Islanders.

“Eventually he is going to cause a big problem for another prime minister or for another government,” he said.