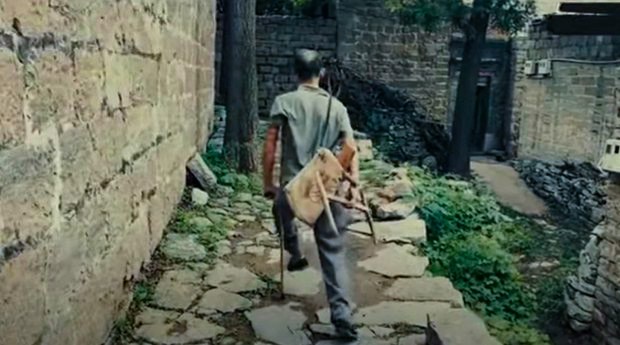 The 20th National Congress of the Chinese Communist Party (CCP), which convenes in Beijing on Oct. 16, is expected to grant an unprecedented third five-year term to Xi Jinping, the CCP general secretary and state president. In the run up to the congress, RFA has examined the 69-year-old Xi’s decade at the helm of the world’s most populous nation in a series of reports on Hong Kong, foreign policy, intellectuals, and civil society.

In the summer of 2022, a Chinese video blogger had a viral hit with what he intended as an inspirational tale of his great uncle, a resourceful elderly relative who made a living as a carpenter, and was still working well into his eighties.

But the narration also carried a sting in the tail: “Second Uncle really wants to earn a little retirement money for himself … but my grandmother can’t take care of herself any more, even telling me ‘I don’t want to live any more,’ and that she once hung up a noose ready on the doorframe.”

As ruling Chinese Communist Party (CCP) leader Xi Jinping gears up to seek an unprecedented third term in office at the 20th party congress on Sunday, he will be claiming among his achievements the “eradication” of extreme poverty in China.

China declared in November 2020 that it had eliminated extreme poverty, claiming success for one of Xi’s key policy goals ahead of the CCP’s centenary the following year.

Yet as government-backed employment schemes have focused on getting younger people to seek jobs in cities, elderly people in rural areas have been left to eke a meager living from government subsidies, without the younger generation around to help, and without enough money for decent medical care.

Many are deciding such a life isn’t worth living any more.

“When you go to the countryside, you often hear that someone died, and when you ask about it, they often tell you it was pesticides [which means] suicide,” former NGO worker Yao Cheng, who has researched women and children’s rights in rural China, told RFA.

“In 2011, a German journalist and I went into a mountainous area of Hunan, where basically everyone in the village had left,” Yao said. “It took two hours walking through the mountains to get there.”

“The younger people in the village had all gone to find work … and everyone left behind were old bachelors in their 60s and 70s,” he said. “A lot of them were living on monthly subsistence payments from the government of less than 100 yuan [currently 170 yuan/month].”

“They didn’t want to die in pain; I heard that they would hoard extra sleeping pills because they wouldn’t have the strength to hang themselves if they were sick,” he said. “Another common suicide method is drinking pesticides.”

“They don’t feel that they can carry on living any more.”

A resident of a village in the eastern province of Anhui, who gave only the initial L, said at least two elderly people from his hometown have ended their lives during the past three or four years, often because of illness.

“The most urgent need in rural areas is medical care: general medical care; chronic disease care and treatment for serious illnesses,” L said, adding that his mother-in-law currently struggles to find money for her glaucoma medication.

While her medical insurance once reimburse half of the 3,000 yuan annual cost, now she gets nothing at all, prompting L to wonder whether the funding has been taken up by the constant COVID-19 tests required under Xi Jinping’s zero-COVID policy.

“Elderly people in rural areas are actually forced to choose suicide by their circumstances,” Chen said. “They are ultimately still dependent on the small amount of food they can produce from the land.”

“Without mobility, they have nothing,” he said. 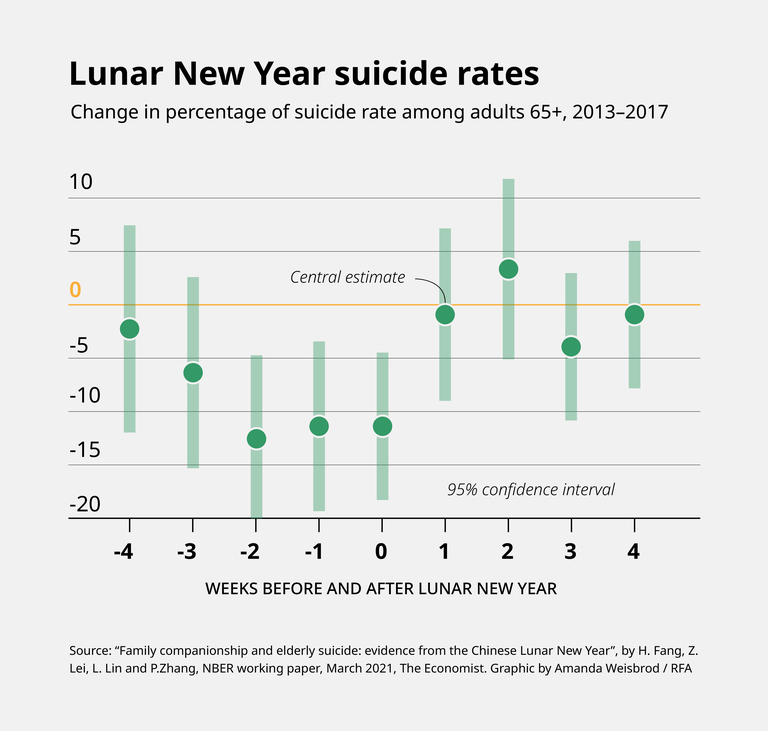 “There’s a saying in rural China that goes ‘put off the small stuff, suffer through the big stuff, and don’t go to hospital till you’re at death’s door’,” Chen said.

“This is a reflection of the general lack of economic security and people’s inability to meet their medical needs.”

Data from China’s 2020 national census found that nearly 24 percent of the rural population is now over 60, with more than 100 million elder people now living alone in the homes where they once raised their families.

Social isolation is also a major driving force behind suicide in this group, according to Chen Yu-Chih.

“Social isolation has been proven to drive mortality in academic studies,” Chen said. “The impact on health is similar to the effect of smoking 15 cigarettes a day.”

Conversely, a 2021 study by population researchers at the University of Pennsylvania found that the suicide rate among older adults fell by 8.7 percent during the Lunar New Year holiday, when grown children return to their parental home.

Chen Guangcheng says the issue could be solved by better government policies.

“The CCP shouldn’t misallocate its social resources,” he said, adding that there is a huge imbalance in government spending across rural areas and cities.

More than 500 million people currently live in rural areas, around 36 percent of the population. Yet they depend for their healthcare on just 1.35 million rural clinics, of which only around 690,000 are staffed by certified doctors and healthcare workers, a ratio of one healthcare worker to more than 700 people.

Figures from 2021 showed a 40 percent drop in the number of people holding rural doctor certification, from 1.26 million in 2011, with an official study citing low pay and lack of security for old age and retirement as major factors behind the fall.

Yao Hao, a psychiatrist at the Shanghai Mental Health Center, penned an article earlier this year in the officially backed English-language media outlet Sixth Tone, sounding the alarm over a mental health crisis in rural areas.

“At present, the responsibility for caring for those with mental illnesses is shared between families, communities, and institutions, with families bearing the brunt of the burden,” Yao wrote. “In China [there is a] social obligation for families to take care of members who are unwell.”

“This obligation puts a huge amount of pressure on families, especially in poorer communities,” he wrote. “Once that pressure exceeds the family’s ability to cope, problems are likely to arise; for example, patients are sometimes left in the hospital or locked in their homes.”

Recent figures from China’s National Aging Office, the ministry of civil affairs and finance ministry indicate that there are also 40.63 million disabled and semi-disabled elderly people in China, with just 44,000 qualified elder care workers in the entire country.

The lack of care workers often leaves rural elderly residents to rely on friends and neighbors for support, according to Chen Yu-Chih.

“But these resources aren’t sustainable,” Chen said. “They are unreliable and unstable.”

A Beijing resident who gave only the initial C, whose grandmother took her own life, said lack of money is often enough of a reason for elderly people to take their own lives.

“After my grandma passed away, the local government didn’t respond in any way,” C said. “I was pretty shocked. It’s obviously due to a problem they created. How can they be so unjust and indifferent?”

Back in Anhui, L wanted to know why rural communities have always had to shoulder the burden of political, social and economic change in China.

“My grandfather had high blood pressure and had to take various medications for diseases of the elderly,” L said. “It cost 800-900 yuan a month, adding up to around 10,000 yuan a year.”

“That cost was astronomical for him, an old man living alone in the countryside.”

“Ever since the [People’s Republic of China] was founded in 1949, it has always been the rural areas and farming communities who have made the biggest sacrifices, including through the [post-1979] economic reforms,” L said.

“They have always had inadequate education, medical care and pensions … This is a huge segment of the population, and yet [those in power] can’t tell that they are suffering, or they don’t know why?”

Translated and edited by Luiseta Mudie.