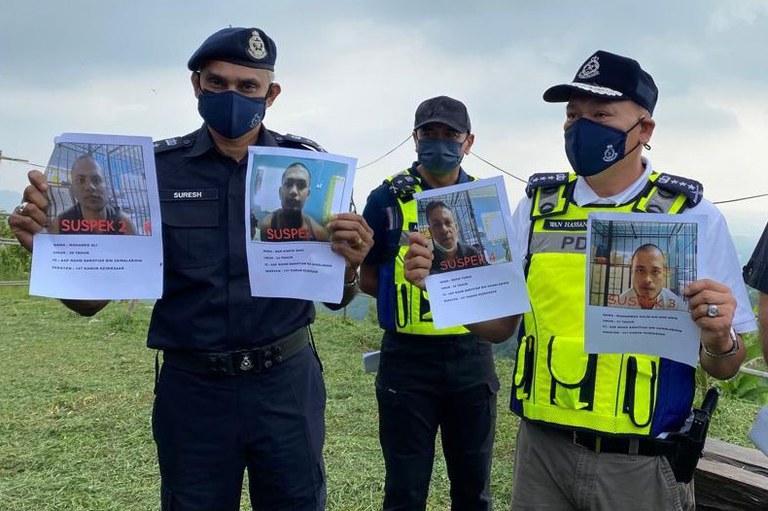 Malaysian police have detained two Rohingya they suspect of having instigated a riot and mass breakout at a detention center that led to six escapees being fatally struck by vehicles on a highway in the middle of the night, authorities in northern Kedah state said Friday.

Eighty-eight Rohingya remained at large, including nine women and eight children, according to police chief Wan Hassan Wan Ahmad, who urged local people not to help them. Sheltering people who violate immigration laws is punishable by up to 10 years in prison, he said.

“It’s been three days. These people are hungry, barefoot. They will not be able to last, with children in tow. We ask the public to immediately report to the police if any refugees seek help from them,” he said.

A total of 287 officers in three states – Kedah, Penang and Perak – have been mobilized to look for the remaining escapees, Wan Ahmad said.

Meanwhile, amid ongoing updates about the manhunt, a Malaysian media advocacy group urged local officials and media not to use language that could foster hatred or fear of Rohingya people.

“Publishing authorities’ comments that label Rohingya detainees as ‘highly dangerous’ … or that ‘they may also act out of control to survive’ presents the detainees as ‘violent and irrational,’” said a statement by the Malaysia-based Center for Independent Journalism (CIJ).

Reporters should “interrogate the root causes behind the breakout, and not … sensationalize the issue by framing it as a crime,” it said.

“While we understand the need for balanced and accurate reporting, there is a fine line that could potentially trigger increasing xenophobia and discrimination,” CIJ executive director Wathshlah Naidu she told BenarNews.

Death hours before riot being investigated

“For the record, there was a death involving a detainee in his 30s late at night, hours before the early morning rioting took place. We are conducting a post-mortem on the body and until we have the autopsy report, I wish to call on everyone to refrain from speculating,” he said.

“So far, what we know is that the escapees only wanted their freedom and it was not because they were unhappy with the camp management,” he said.

No serious injuries were reported in the riot early Wednesday, officials said then, adding that security personnel on duty were quickly overwhelmed as 528 people escaped. Two children were among the six later struck and killed on a highway about six km (3.7 miles) away.

Most of the escapees have since been captured and taken to a detention facility in Semenyih, Selangor, about 350 kilometers (218 miles) from the place they escaped.

“We have taken statements from 420 Rohingya detainees and also took their fingerprints for record. [The riot occurred] probably due to congestion and having been in detention for too long,” Wan Ahmad, the police chief, said Friday.

On Wednesday, Home Minister Hamzah Zainudin had said the Rohingya who broke out of the detention center were brought there after being apprehended in Langkawi, off the coast of Kedah, in 2020.

But the Kedah police chief on Friday said the main instigator of the unrest had been there three years – and was transferred there from another immigration facility.

“He was transported here from Semenyih Depot three years ago,” Wan Ahmad said.

“As of now, we believe his main motivation in orchestrating the riot was to create an opening to flee from the depot,” he said of the 34-year-old suspect.

Hamzah, the home minister, said Thursday that the reason the Rohingya had been detained for more than two years at immigration centers was because the Myanmar government did not recognize them as citizens.

The onset of the COVID-19 pandemic in 2020 saw a sharp rise in negative sentiment toward Rohingya people in Malaysia, with increased hate speech directed at the group.

Dozens of NGOs spoke out against the treatment of Rohingya refugees during health-related government round-ups of immigrants and by citizens who took to social media to post views that included threats and dehumanizing language and images.

The tragic events on Wednesday drew international attention, along with calls for a probe of what led to the unrest and for transparency about Malaysia’s secretive immigrant detention centers, where people are held indefinitely and incommunicado.

Jerald Joseph, a member of Malaysia’s Human Rights Commission (Suhakam), called on immigration authorities to allow representative from the United Nations High Commissioner for Refugees to meet with the detainees.

“The Immigration Department has to give access to UNHCR so they can determine whether the ones detained were really Rohingya. If so, they should be freed like the 150,000 Rohingya who are here in the country,” he said.

While Malaysia allows refugees to enter the country, it has not signed the U.N. Refugee Convention. Those caught by the authorities, including children, are often detained in immigration detention centers indefinitely.

Close to 1 million Rohingya who have fled persecution in Myanmar are living in crowded refugee camps in southeastern Bangladesh, but many undertake perilous sea journeys in search of a better life in Southeast Asian countries including Malaysia.