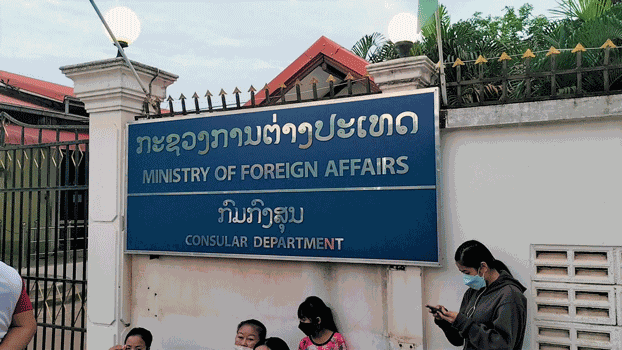 Hundreds of Laotians are lining up daily outside the Lao Ministry of Foreign Affairs in Vientiane to apply for or renew passports so they can go to neighboring Thailand, where they hope to find better paying jobs and escape crippling inflation at home.

Laotians say it has become increasingly difficult to eke out a living in their country, given the rising costs of gasoline, food and daily necessities. A government plan to increase the country’s monthly minimum wage from 1.1 million kip (U.S. $75) to 1.3 million kip (U.S. $88) likely won’t be enough to keep workers home.

“How can we live on 1.3-million-kip salary in the current situation?” asked a garment factory worker in Savannakhet province, adding that the minimum monthly wage should be at least 2 million kip (U.S. $150) because consumer prices have doubled.

“The increase is too small, and salaries are too low,” he told RFA on Thursday. “As soon as I get my passport, I’m going to Thailand where the salary is three times higher.”

Laos’ inflation rate stood at 12.8% in May — one of the highest in Southeast Asia — with a record 9% increase during the first five months of the year compared to the same period in 2021, according to the Lao Statistics Bureau. A lack of fuel and the ongoing depreciation of the kip are to blame for soaring inflation.

“The Lao currency, the kip, is now floating and continuously losing it value,” said a factory worker in Champassak province in southern Laos. “The government should take the financial and economic situation into account while raising the minimum wage. Wages should be balanced with the cost of living.”

“The government will speed up efforts to resolve the fragility of the macro-economy and normalize the situation,” Phankham said Monday at the start of the Lao National Assembly’s Third Ordinary Session, according to the local Vientiane Times.

A member of the Lao Federation of Trade Unions said that his organization had asked the government to increase the minimum wage to 1.5 million kip (U.S $101) per month, but officials refused.

“Inflation is too high, and the prices of all food and other goods are skyrocketing,” he told RFA. “The minimum wage is not enough for all living expenses. It might be enough only for fuel, but not for food.”

Some government officials at the provincial level also bemoaned the salary situation.

“A salary of 1.3 million kip is too low especially in current situation. We can’t live on that kind of income,” said an official from the Labor and Social Welfare Department of Luang Namtha province in northern Laos.

Lining up for passports

The current economic circumstances have prompted Laotians of working age to head next door to Thailand for better paying jobs.

One Lao worker in Vientiane told RFA that in recent weeks he had observed about 500-600 mostly young people waiting each day outside the Foreign Affairs Ministry to submit passport applications, though the ministry was handling only 250-300 applicants.

People arrived at the building the night before and slept on the sidewalk to ensure they would get in the next day, he said.

“It’s crowded — packed,” said a young Laotian waiting in a long line to apply for a passport on Thursday. “The number of people lining up is growing. I’ve been in line since dawn.”

Officials are now accepting about 500 applications a day, up from 300 a couple of days ago to ease long waits, he said.

Another passport applicant from Savannakhet province said there are long lines at the ministry because there is no online application process.

The department is adding more staff members and asking them to work overtime so they can accept more applications daily, he said.

Meanwhile, Lao workers must deal with skyrocketing prices for gasoline, food and everyday products, which have nearly doubled, with the kip depreciating versus the Thai baht and other foreign currencies during the past five months.

“Everything is bad now,” said one worker. “Our currency has depreciated, and the Thai baht is strong. We can earn at least U.S. $10 per day in Thailand, and every month if we earn U.S. $300 it means that we get about 5 million kip per month.”

The factory worker in Savannakhet told RFA that the majority of young people in the province prefer going to Thailand to earn more money.

Since land borders between Laos and Thailand were fully reopened on May 9, over 2,000 Laotians crossed the border daily compared to only 300 people during the first two weeks, according to a report issued by Thai customs officials on June 7.

Not everyone heading to Thailand is seeking a job. Lao tourists and commodities traders have also pushed up the number of people crossing the border, said a border guard in northeastern Thailand’s Nong Khai province.

“We see around 1,000 to 1,500 Laotians entering Thailand [at Nong Khai], and there are over 2,000 people on the weekends,” he said. “They come for all reasons, and some of them are tourists and migrant workers.”

More Laotians seeking work are crossing the Mekong River to enter Thailand, because of the poor economy at home, said an official in Savannakhet province, which borders Thailand to the east.

“Now, more people are crossing the border to Thailand to find jobs as it is convenient to do so,” he said. “The living cost in Laos is rising, Lao kip is depreciated in value, and the minimum wage is still the same. That’s the reason why.”

An official in Khammouane province, north of Savannakhet, said he has noticed that Laotians applying for new passports go mainly to Thailand in hope of finding work because of Laos’ rising cost of living and currency depreciation.

“We are seeing more people applying for new passports as they are migrant workers. Many of them are going to Thailand as economy of Laos is not going well and monthly wages is low as well as the value of our currency is also low.”

Translated by Phouvong for RFA Lao. Written in English by Roseanne Gerin.