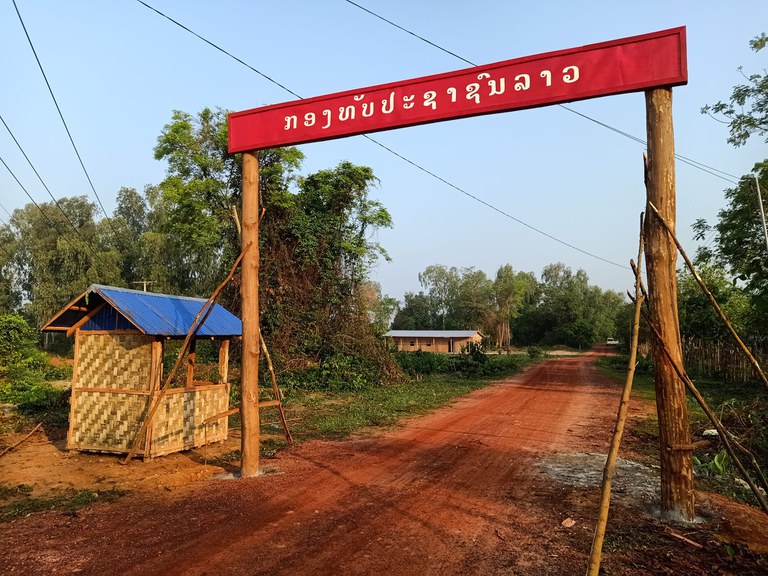 Five Lao villagers were beaten and detained Sunday in a village north of Vientiane by soldiers who said the group and their families were living on land owned by the country’s military, according to Lao sources.

Around 40 families had lived in Sisawat and Houay Nam Yen villages in Naxaithong district since 1989, when they fled homes damaged by floods at the nearby Nam Houm Reservoir. Soldiers claiming ownership of the land began around five months ago to build there, one local villager told RFA.

“Officers from Section 513 of the Vientiane Military Division have been building shelters and a gate on the land for the last four or five months, barring us from farming there,” the source said, speaking on condition of anonymity for security reasons. “And on Sunday, they detained five of us and took them away in a truck, beating them and threatening them with rifles.”

Around 60 to 70 soldiers are now present at the conflict site to prevent disturbances and make further arrests, she added.

Villagers have lived and farmed in the disputed area for 20 to 30 years, another local source said, also declining to be named.

“Our parents lived there until they died, and before the soldiers came. But the soldiers now tell us that we’re living on their land, even though they have no documents to show our village chief proving their ownership.

“Their own word is all they have,” she said.

Military officers are required to make a report to village authorities of any incident in the area involving their troops, the source added. “But they just took our villagers to a truck and drove away,” she said.

“The five villagers are now reportedly being held in the Vientiane Military Division and are not being allowed to see their relatives and family members,” the source said.

Vientiane’s Agriculture and Forestry Department had formerly used the disputed land for feeding livestock. But when the Nam Houm Reservoir collapsed in 1989, villagers moved to the area’s higher ground to escape the flood, he said.

The disputed land is now fertile and well suited to feeding livestock and raising crops for cash, he said, adding that villagers had invited army officers to a meeting to help resolve the conflict, but that officers had ignored their request.

“The Vientiane Military Division said this was the duty of Section 513, while Section 513 said it was the military division’s responsibility,” the local village authority said.

The five detained villagers were residents of Houay Nam Yen village and had temporary documents proving their right to their land, the source said. “But the military officers took these away from them,” he added.

Naxaithong district deputy head Phouvone Phong-Latkeo said, however, that local villagers have no right to the disputed land, saying the Vientiane Agriculture and Forestry Department had handed it over to the military following the Nam Houm flood and that it was now property of the state.

“Villagers grabbed and repurposed the land without authorizing documents. In fact, the land is reserved for the Nam Houn Reservoir and does not belong to them,” he said, adding that villagers displaced in 1989 by the reservoir’s collapse had already been compensated for their loss.

The five villagers detained by soldiers on Sunday had not been formally arrested but were taken away for “re-education” because they had gathered others to stage a protest and cause disruptions, Phouvone said. “Thus, the officers had to assert their control and prevent more problems.”

Sources told RFA on Tuesday that the five now held are being questioned by military authorities, with no word given yet on when they may be released.

“The military will release them later, but they may still end up being held for a while,” a Naxaithong district official said. “Their families have asked the military for permission to visit and bring them some food, but their request was denied.

“The military officers haven’t said when they’re going to release the villagers. But some rumors say they might be freed sometime after the Lao New Year on April 15,” a district villager added.

Reached for comment, family members of some of those now held declined to speak about the case, fearing retaliation by authorities, while one family member was ordered on Monday to delete a video he had taken of the arrests.

An official of the People’s Council, meanwhile, said his office had received no reports of the conflict or arrests.

“A report may have been sent to the economic committee, though, because the conflict involves land,” he said.

Some of the families living on the 25-hectare area of land now claimed by the army had inherited the land from their parents even before the 1975 communist takeover of Laos, and had paid property taxes on the land ever since, another villager told RFA.