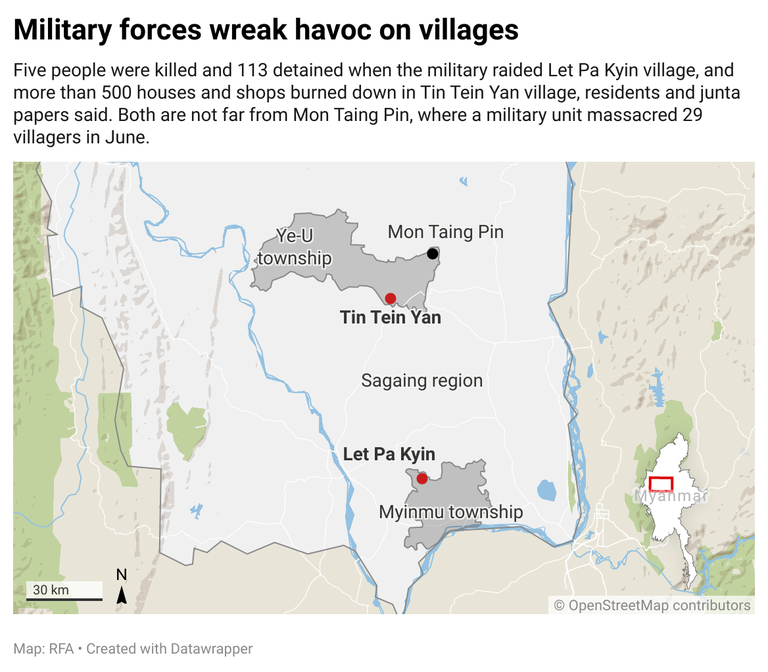 News of the Monday raid on the school in Myinmu township’s Let Pa Kyin village, located about 100 kilometers (62 miles) west of Mandalay, came amid reports that the military razed more than 500 buildings in four days of arson attacks on the village of Tin Tein Yan in Sagaing’s nearby Ye-U township.

A resident of Let Pa Kyin who escaped the raid on Let Pa Kyin told RFA Burmese that more than 50 troops arrived at the village in a convoy of five military helicopters.

“[The helicopters] brought the soldiers in group after group. It took about an hour and a half,” said the resident, who spoke on condition of anonymity citing security concerns.

“Some soldiers were dropped around the village and some in the school compound. The children were scared and ran away. Though the older ones escaped, the young ones didn’t.”

At least 113 civilians were arrested in the raid, including teachers and students, villagers said.

A second resident, who also declined to be named, said the raid began at around 10 a.m. on Monday when classes at the NUG-sponsored school were in session and villagers were engaged in their daily routines.

“If the army had approached the village from the ground, [anti-junta forces] in the area could have given a warning and the villagers would have been able to run and avoid the soldiers. But in the case of an air raid, there is no way to know in advance,” he said, adding that those who escaped had only a moment’s notice.

“We’re at their mercy. We can’t say anything [about our status] for sure. The situation is totally unsafe. We can’t do anything except worry.”

The resident said he could only “pray for the release of those arrested.”

Let Pa Kyin village is home to about 250 houses and more than 1,000 residents. Sources said that during the raid, many villagers were forced to flee to nearby areas for safety.

A report in the junta’s Myanma Alin newspaper on Tuesday said that the military was carrying out arrests of anti-junta People’s Defense Force (PDF) paramilitaries who had gathered in Let Pa Kyin village.

After a brief clash, it said, the military “seized five bodies,” as well as homemade weapons and ammunition from a PDF camp it captured about 500 meters (one-third of a mile) northwest of the village.

A total of 113 people — 49 men and 73 women — were detained in the village and are “being questioned as needed,” the report added.

A local PDF member who asked to remain anonymous told RFA that his group had prepared to hold a meeting at a location in Let Pa Kyin village on Monday but was delayed and was therefore able to escape the arrests.

A fighter with the Myinmu Township PDF said the group had yet to confirm the Myanma Alin report of five dead in the raid.

“I don’t know about the death of five PDF members,” he said, adding that his group will fight back against military raids targeting Myinmu township “by any means necessary,” regardless of whether troops use helicopters or other superior weaponry.

Residents told RFA that junta troops were still stationed in Let Pa Kyin as of Tuesday and that the status of the village remains unclear.

When contacted by RFA, junta Minister of Social Affairs for Sagaing Region Aye Hlaing said he was “unaware” of the reports of the raid on Let Pa Kyin.

A resident of Myinmu township said villagers are less safe than ever as the military ramps up its use of helicopters to conduct raids in the area.

“Look at all the incidents that have taken place. Villages have been burned. They shoot at anything they see from their helicopters and the people are suffering,” he said.

“In Let Pa Kyin, two boys who were herding their goats died, as did a woman working at a betel nut farm. Another worker was wounded. They were not PDF fighters. The soldiers are now committing their war crimes from the air as they cannot move freely on the ground [due to the opposition].”

Residents told RFA that Monday’s attack followed one on July 27, when troops in four helicopters raided Myinmu’s Mu Mandalay village. They said that the military had cut off internet access to the area amid the raids, forcing more than 5,000 villagers to flee their homes.

Reports of the raid on Let Pa Kyin came as residents of Sagaing’s nearby Ye-U township told RFA that the military had destroyed more than 500 buildings between July 28 and July 31 in arson attacks on the village of Tin Tein Yan, located around 170 kilometers (105 miles) northwest of Mandalay.

The buildings destroyed in the fires included the area’s Thegon Gyi Monastery, around 250 shops in the local market — including an office run by the MPT telecom company — 312 homes, five rice mills and two cooking oil plants, they said, while several cars and motorcycles were also burned.

“Altogether, around two-thirds of the village has been razed to the ground — it’s like a wasteland,” said one resident of Tin Tein Yan, who asked to remain anonymous.

“Some villagers are now cleaning up the mess. They have to make arrangements to build temporary shelters. Apart from those who are cleaning up, the rest of the villagers don’t dare return.”

Residents said the raids were carried out by a column of nearly 100 soldiers from the No. 701 Light Infantry Battalion, headquartered in Yangon region’s Hmawbi township. They said that prior to entering the village on July 27, the troops killed a 43-year-old man at an irrigation ditch located around 6.5 kilometers (4 miles) outside of the township’s Zigone village.

RFA was not able to independently confirm the claims by villagers in Tin Tein Yan and the junta had yet to release any information about military operations in the area on Tuesday.

Tin Tein Yan is one of the area’s larger villages, with about 600 houses, a market, a high school, a sub-district clinic and a railway station. The village serves as a hub on the railway line that runs from the seat of Ye-U township to Sagaing’s largest city Monywa, located around 90 kilometers (55 miles) southwest via the town of Budalin.