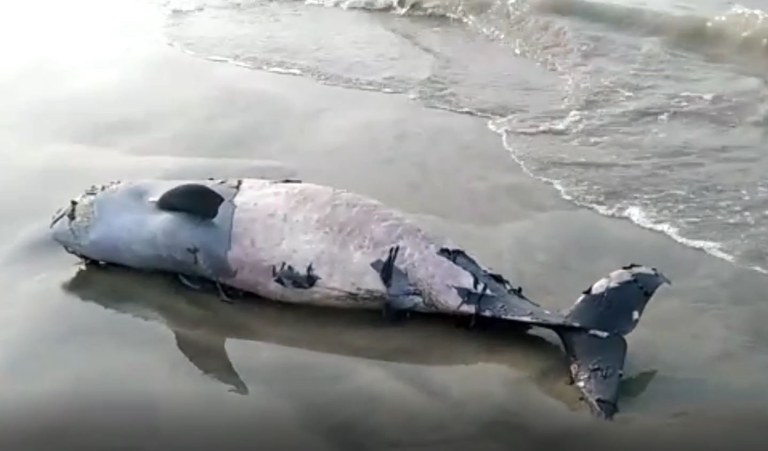 “But now we see a lot less dolphins,” the 58-year-old fisherman from Patuakhali district told BenarNews. “The main cause of death is due to fishing nets. The number of fishermen has increased 10 times compared to 30 years ago.”

The deaths of two Irrawaddy dolphins earlier this month near Kuakata beach where Majhi fishes highlight the threat faced by the aquatic mammals in Bangladesh, which hosts the world’s largest population of the species, authorities and fishermen said.

Bangladesh Forest Department officials recovered the remains of the dolphins on May 3 and 14, bringing the tally this year to at least eight. All were found in the same Kuakata beach area in Patuakhali, about 294 km (183 miles) south of Dhaka.

Meanwhile on May 22, a local Bangladesh media report said that a pregnant female Irrawaddy dolphin had died after being hit by a trolling net. The report said the dolphin was found floating at the mouth of Andharmanik River in Patuakhali district that morning.

The trend worries government authorities, environmentalists and fishermen. Similar concerns have been raised as the Irrawaddy population has plummeted on the Mekong River near Cambodia’s border with Laos.

“This is really a matter of concern for us that the Irrawaddy dolphins are dying,” Abdullah Al Mamun, the division forest officer in Patuakhali district, told BenarNews.

Forest officials were examining the causes of the latest dolphin deaths, he said.

The Irrawaddy dolphin, which is distinct for its roundish head and lack of beak, is found in freshwater along with brackish shallow coastal waters in South and Southeast Asia, from Bangladesh to Mekong region and the Philippines.

The name comes from the Irrawaddy River in Myanmar where the first specimens were described, according to riverdolphins.org, a website on dolphin conservation and management.

Majhi, which means “boatman” in Bengali, said no fisherman intentionally kills a dolphin.

“Every dolphin’s death makes fishermen very sorry,” he said. “Dolphins are a very emotional type of animal. They move in groups. When one is entangled in a net, others come around the trapped dolphin.”

“The number of fishermen in this area has increased over the years. So more dolphins are getting trapped in the fishing nets,” said Uddin, chief scientific officer for the marine fisheries survey management.

In 2019, Dhaka adopted a Dolphin Conservation Action Plan to save the country’s population of Irrawaddy, a protected species, along with the Ganges River dolphin.

The plan authorizes the fisheries department to work with fishermen, while the main task of saving and conserving the dolphins goes to the forest department.

“In line with the action plan, we have started awareness campaigns among the coastal fishermen so they can immediately release the dolphins, if possible,” Uddin said.

“So, if we can make them more sensitive, there is a possibility that some of the dolphins trapped in the nets could be saved,” he said.

But locals said they do not always know whether a large fish or a dolphin has been entangled in their long nets and can rescue only those caught close to them.

“Once caught, the dolphins die in a maximum of 10 minutes,” Majhi, the fisherman, said.

“Some fishermen use very thin and transparent nets which the dolphins cannot always detect. When they run after fish, they cannot detect the presence of the thin fishing net and get entangled with it,” he told BenarNews. “As a result, they suffocate and die underwater in a short time.”

Bangladesh’s coasts and the coastal rivers host about 80 percent of the world’s Irrawaddy dolphins, Aziz said.

The Irrawaddy dolphins are classified as “endangered” on the IUCN Red List of Threatened Species, with some river and coastal subpopulations designated as “critically endangered.”

In February, the last known freshwater Irrawaddy dolphin on a stretch of the Mekong River near Cambodia’s border with Laos died after being snagged in a fishing net, said wildlife officials and villagers from both sides of the frontier. Overall, a few dozen of these dolphins survive in the Lower Mekong region.

The Irrawaddy population along the Mekong has declined from an estimated 200 in 1997 to 89 in 2020, according to riverdolphins.org.

IUCN said the dolphin population level was satisfactory in Bangladesh waters where they are frequently spotted near the Sundarbans, the world’s largest mangrove forest, and the Meghna River estuary near Nijhum Dwip.

It said the Irrawaddy’s regional habitat was affected by increasing salinity caused by climate change and freshwater withdrawals.

The fresh water flow into the river system that is needed to produce a suitable mixture with salt water to create the proper habitation for dolphins has been reduced, environmentalists said.

The forest department, which investigates each recorded dolphin death, has concluded that in most cases they were entangled in fishing nets or hit by trawlers.

Tushar, the team leader at the Dolphin Conservation Committee in Kuakata, said the story of Irrawaddy dolphins dying in fishing nets, while “true to a large extent,” is not complete.

“Fishermen are everywhere along the Bangladesh coast and rivers. Why do we see dead dolphins come to the Kuakata beach year after year? We do not see such frequent deaths of dolphins in other parts of Bangladesh,” Tushar told BenarNews.

“I think the government agencies must investigate seriously to find the true cause of death of the dolphins in Kuakata.”

Subel Rai Bhandari in Bangkok contributed to this report by BenarNews, an RFA-affiliated online news service.