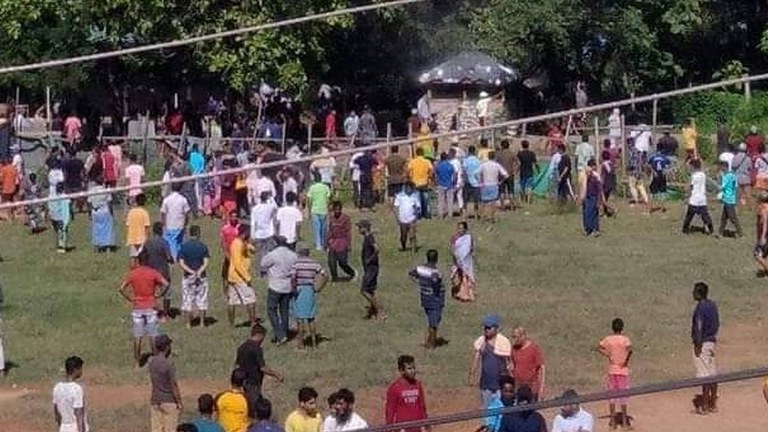 A source in Sagaing’s Tamu township told RFA Burmese that Indian nationals M. Pyanar, 32, and P. Mohan, 28, were visiting friends in the area on Tuesday when they were stopped by members of the pro-military Pyu Saw Htee militia at an unofficial checkpoint in Tamu’s Saw Bwar ward and shot dead.

“There’s a school we call Saw Bwar 10 No. 4. The two were shot near there,” said the resident, speaking on condition of anonymity. “Witnesses said that the shots were fired by Pyu Saw Htee. The two men were shot in the head and died instantly.”

The source said the bodies of the two men were brought to the Tamu People’s Hospital, where they are being held in the morgue.

He said that residents of Moreh township across the border in India’s Manipur state are demanding that the bodies be returned to their families, prompting Indian authorities to shut down their side of the border crossing on Wednesday.

“At the moment, we are not allowed to enter India at all,” the source said.

A Tamu resident who is close to the families of the victims told RFA that the area where they were killed is “Pyu Saw Htee territory.”

“The two Indians were killed in that area. [The perpetrators] found out only later that they were Indian citizens,” said the source, who also declined to be named.

“Both were shot in the head. They had a motorcycle with them. One wore a ring on his hand and the other had two. … When the bodies arrived at the morgue, [the motorbike and rings] were gone.”

RFA was unable to independently confirm the details of the deaths.

India’s Tamil Guardian on Wednesday also reported the killings as having been carried out by the military proxy Pyu Saw Htee.

“The Myanmar army might have suspected them to be spies and shot them dead,” the report said, citing the local Tamil Sangam. “There is a killing every day by the army in this part of Myanmar.”

An official order issued on Wednesday by the deputy commissioner of Tengnoupal township, under the government of Manipur, announced that no one would be permitted to cross the border from Moreh into Myanmar without a special permit, citing the “prevailing law and order situation” in the country.

A Myanmar national living in Moreh told RFA that local youths were outraged over the deaths and said around 200 people had gathered near the border on Wednesday, demanding that the bodies of the victims be returned to their families.

“Young people have gathered near the border gate and are challenging the Myanmar authorities,” he said.

“They also beat up some people from the Myanmar side who crossed the border this morning [prior to the closure]. They are all furious.”

Another resident of Moreh said the protests began when Myanmar authorities failed to deliver the bodies back to India by noon on Wednesday, as had been originally promised.

“They are protesting because [the bodies were] not sent,” he said.

“They have been gathering since the morning. Myanmar nationals in Moreh have not been able to go out in fear. The protesters set fire to a Myanmar border patrol checkpoint between Tamu and Moreh.”

Indian media reported that shops had been closed amid increased security in Moreh, citing the unrest over the killings.

The Tamu-Moreh border crossing was reopened on June 4 after being closed for nearly two years due to the coronavirus pandemic. Residents of Tamu told RFA that around 50 traders travel across the border to the neighboring Indian township daily for work.

Myanmar refugees in India say more than 300 families displaced by conflict between junta troops and armed opposition groups in Sagaing have crossed the border seeking shelter in Moreh, and that anger over Tuesday’s killings forced many Myanmar nationals living there to flee the area.