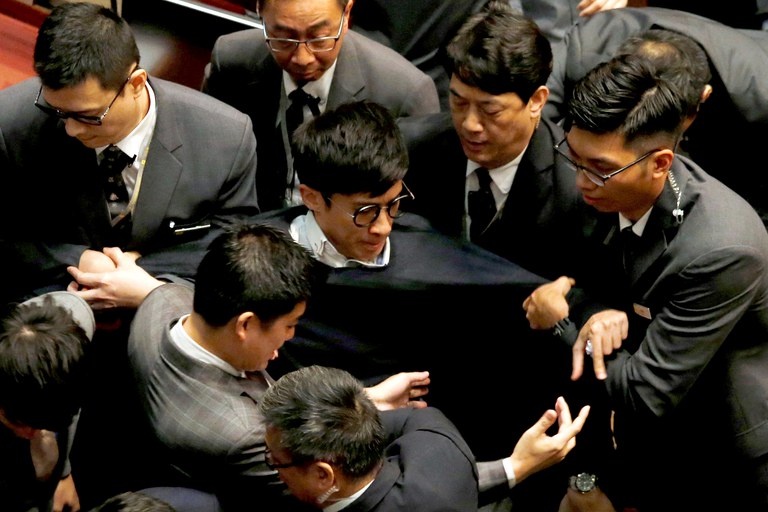 Authorities in Hong Kong said on Wednesday they will pursue three Canada-based activists who recently announced they would set up a Hong Kong parliament-in-exile under a draconian national security law that applies anywhere in the world.

It said the activists are now suspects under Article 22 of the law, which bans “subversion of state power.”

Forty-seven former opposition lawmakers and democracy activists are currently behind bars awaiting trial on the same charge for their involvement in a 2020 democratic primary election aimed at maximizing the number of opposition seats in LegCo.

Soon after the primary, the government postponed the LegCo elections and rewrote the rules to force candidates to undergo vetting by a committee overseen by the ruling Chinese Communist Party (CCP) and national security police, effectively barring any pro-democracy candidates from running.

“The Security Bureau appeals to the public to dissociate themselves from individuals contravening the Hong Kong National Security Law, and the illegal activities those individuals organized, so as to avoid bearing any unnecessary legal risks,” a spokesman said in a statement.

Yuan, Ho and Leung are part of a group that announced the parliament-in-exile plan in Canada on July 27, along with plans to hold the first election under universal suffrage in late 2023.

Leung, who is also known by the English names Baggio and Sixtus, was expelled along with five other newly elected Legislative Council (LegCo) members after China’s National People’s Congress ruled their oaths of allegiance invalid in 2016.

Ho is a journalist and political talk-show host, while Yuen is a current affairs commentator.

The announcement came after the British government said it would broaden eligibility for Hongkongers seeking to flee the current crackdown on dissent and settle in the U.K., allowing younger people more likely to be targeted for taking part in the 2019 protest movement to apply under the British National Overseas (BNO) visa scheme.

“The U.K. has a historic and moral commitment the people of Hong Kong,” home secretary Priti Patel said via her official Twitter account on Aug. 1.

“That’s why I am extending our BN(O) route to allow young people born after the handover of Hong Kong with at least one BN(O) parent to live, work, study and build their lives in the U.K.,” the tweet said.

The changes will take effect in November 2022, and are expected to benefit around 10,000 younger Hongkongers.

Ngan Hei-yin, 19, is currently seeking political asylum in the U.K., a far more difficult route to settlement that risks deportation if the claim is denied.

He told RFA that he will be eligible for the BNO route instead, and won’t need to wait for his asylum application to be approved.

But he said many who do apply for asylum wouldn’t meet the financial requirements of the visa, so could still be excluded for that reason.

“Some people applying for political asylum are receiving government subsidies and don’t have much in the way of assets,” Ngan said. “So there would need to be some supporting measures to help them, if they are going to apply for the BNO route.”

“I hope the government will provide them with support, and also support to make it easier for young Hongkongers to integrate and develop in the U.K.,” he said.

The BNO route requires applicants to show that they can meet their own living expenses for at least six months, but few younger applicants would be able to do this.

Authorities on the democratic island of Taiwan have adopted measures that will allow Hong Kong pro-democracy activists to apply for citizenship five years after seeking asylum in the country, the island’s official Central News Agency (CNA) reported on July 30.

Under the scheme, Hongkongers who entered Taiwan under the government-run ‘Hong Kong Humanitarian Aid Project’ since June 2020 can obtain Taiwan citizenship after a five-year stay, the agency cited sources as saying.

Taiwan’s safe-haven scheme has been criticized by Hongkongers on the ground as opaque and mired in bureaucratic dead-ends, with departments failing to act together to ensure the scheme works for individual applicants.

Some applications from former government employees have been denied amid growing fear of CCP infiltration of the island.

Some 11,000 Hong Kongers got residence permits in Taiwan last year, according to Taiwan’s National Immigration Agency, and 1,600 were granted permanent residency.

By contrast, the U.K. approved 97,000 applications under the BNO route last year.