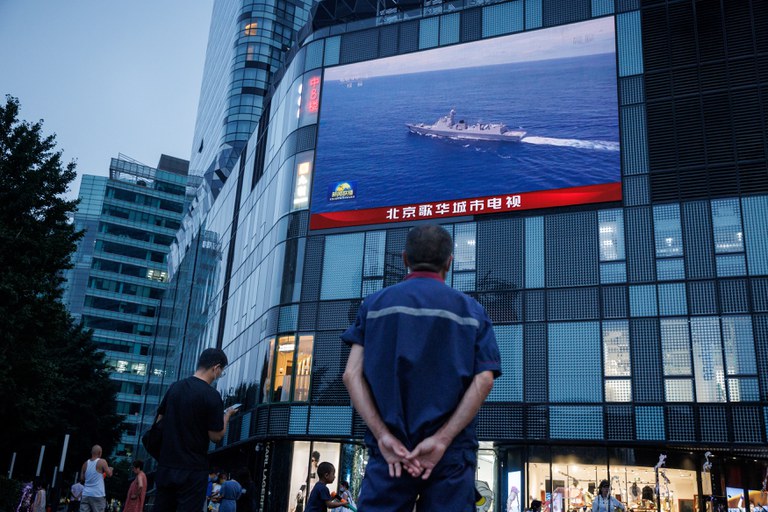 As U.S. House Speaker Nancy Pelosi left Taiwan Wednesday after a stopover that angered China, authorities in the eastern Chinese province of Zhejiang announced the arrest of a Taiwanese man under its national security law, accusing him of engaging in “separatist” activities and supporting formal independence for the democratic island.

Yang Chih-yuen was arrested by state security police in Zhejiang’s Wenzhou city, state broadcaster CCTV cited a police statement as saying, accusing Yang of having founded the pro-independence Taiwan National Party, with the aim of “promoting Taiwan to join the United Nations as a sovereign and independent country.”

“For some time, a very small number of ‘Taiwan independence’ die-hards have colluded with external forces, tried to split the country … [and] tried their best to incite cross-strait confrontation,” the report said.

“State security police will make resolute use of legal weapons like the Anti-Secession Law and the National Security Law to severely punish ‘Taiwan independence’ separatists … [who] reject unification,” it said.

Chinese Communist Party (CCP) leader Xi Jinping has repeatedly said that Taiwan must be “unified” with China, and refused to rule out the use of military force to annex the island. Taiwan has never been ruled by the CCP,  nor formed part of the 72-year-old People’s Republic of China.

But Taiwan president Tsai Ing-wen, who was re-elected in a 2020 landslide after vowing to stand up to China on the issue, has repeatedly said that Taiwan’s 23 million population have no wish to give up their sovereignty, a view that is borne out by repeated opinion polls.

Beijing has a track record in making political arrests as a form of diplomatic statement, in what has been termed “hostage diplomacy,” and Yang’s arrest appears to be a way for China to register its displeasure with Pelosi’s trip, during which she reaffirmed U.S. support for Taiwan’s “flourishing democracy.”

Taiwanese democracy activist Lee Ming-cheh, who served a five-year sentence in China for “incitement to subvert state power,” said during a meeting with Pelosi that the Chinese government shouldn’t use “national security” as an excuse to jail political prisoners.

Lee, who may not have read the news of Yang’s arrest at the time of speaking, called for an end to “residential surveillance at a designated location,” which enables the authorities to deny visits from lawyers or family members for six months where the person has been accused of a “national security” offense.

Pelosi said during her meeting with Tsai on Wednesday that Taiwan, which made a transition to full democracy in the 1990s from authoritarian rule under the Kuomintang (KMT), that the island had “created a flourishing democracy” out of its challenging history.

“Now more than ever, America’s solidarity with Taiwan is crucial,” Pelosi said. “America’s determination to preserve democracy here in #Taiwan and around the world remains ironclad.”

China’s People’s Liberation Army (PLA) stepped up military exercises in the vicinity of Taiwan ahead of and during Pelosi’s trip, a move that both Pelosi and Tsai termed “unnecessary.”

“Facing deliberately heightened military threats, Taiwan will not back down. We will… continue to hold the line of defense for democracy,” Tsai said during the meeting.

“Military drills are unnecessary responses. Taiwan has always been open to constructive dialogue,” she said.

Tsai also presented Pelosi with a Taiwanese honor: the Order of Propitious Clouds.

Pelosi said she wasn’t sure why Beijing “made a big fuss” over her Taipei trip, though she speculated it may have been because she was the House speaker, Taiwan’s Central News Agency (CNA) reported.

The military drills could also be the result of “certain insecurities on the part of the president of China as to his own political situation that he’s rattling the saber,” the agency quoted her as saying.

Pelosi said in an official statement that her trip in no way represented a shift in U.S. policy on Taiwan, which involves not offering the island formal diplomatic recognition while pledging to help it defend itself from the CCP.

“Our visit is one of several Congressional delegations to Taiwan – and it in no way contradicts longstanding United States policy, guided by the Taiwan Relations Act of 1979, U.S.-China Joint Communiques and the Six Assurances,” the statement said. “The United States continues to oppose unilateral efforts to change the status quo.”

But it added: “America’s solidarity with the 23 million people of Taiwan is more important today than ever, as the world faces a choice between autocracy and democracy.”

Lo Chih-cheng, a member of the foreign affairs and defense committee at Taiwan’s Legislative Yuan, said the meaning of Pelosi’s trip was largely symbolic.

Coming as it did under pressure of Chinese threats and warnings, Pelosi’s trip sent an important message to the entire Asia-Pacific and Indo-Pacific region that “the United States and democracies will not yield to Chinese threats and pressure,” Lo told RFA.

The exercises are taking place east of the central line of the Taiwan Strait, further diluting the tacit understanding of the median line formed by the military on both sides of the strait since 1999, Chieh told RFA.

“The CCP displayed a highly violent and irrational reaction to this visit by Pelosi, which has woken the rest of the world up to Taiwan’s significance,” Soong told RFA.

“Right now everyone is slowly realizing that what is happening to Taiwan is actually happening all over the world,” he said. “The crucial thing is this global boost to Taiwan’s visibility and [international] importance.”

“Pelosi’s visit to Taiwan will set a precedent for other countries … especially democratic countries, who may take a more open approach … to Taiwan’s participation in all fields other than as a sovereign [diplomatic partner],” Soong said.

Yang Haiying, a professor at Japan’s Shizuoka University, said the visit will likely further consolidate the relationship between Japan, Taiwan, and the United States.

“[Pelosi] went to Taiwan to represent the United States, to stand with Taiwan, and Japan will decide on its relationship with the United States based on this,” Yang said. “It could be said that the destinies of Taiwan and Japan have been tied together by this … visit, further consolidating the relationship.”

“We must seriously urge the CCP authorities to immediately cease their threatening and provocative actions, and not to misjudge the situation, giving rise to unbearable and serious consequences,” Chiu said.

“The fact that there is no affiliation between [Taiwan and China] is an objective reality, and the status quo,” he said. “No amount of extreme pressure from Beijing can change this fact.”

He said Taiwan’s government, which still uses the name of the 1911 Republic of China founded by Sun Yat-sen, would never surrender its sovereignty despite the threat of military force.

Foreign ministry spokeswoman Joanne Ou said Taiwan insists on being treated as an equal partner with China, an idea that is anathema to Beijing.