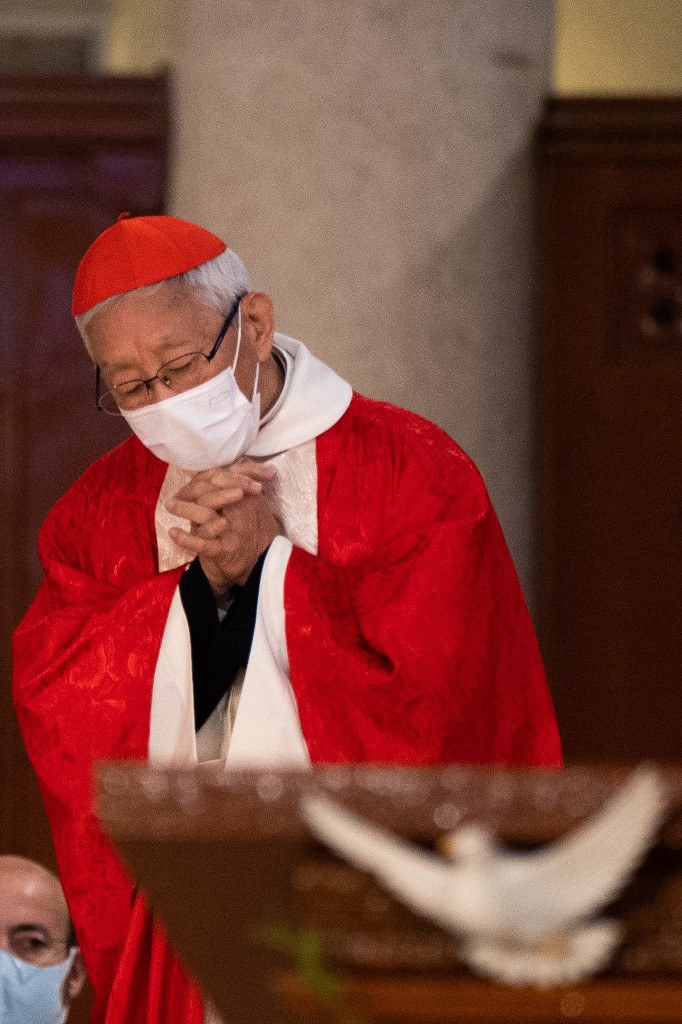 National security police in Hong Kong have arrested four people including Cardinal Joseph Zen and pop star Denise Ho on suspicion of “collusion with foreign powers” after they acted as trustees for a legal defense fund for democracy protesters.

Hui Po-keung, another trustee of the now-disbanded 612 Humanitarian Relief Fund, which helped arrested protesters pay for their legal and medical bills, was arrested at Hong Kong’s international airport on Tuesday.

Zen, a 90-year-old retired Catholic bishop who has long been an outspoken defender of human rights, democracy and civil liberties, Cantopop singer Denise Ho and barrister Margaret Ng were also arrested on the same charge.

Some reports said former pro-democracy lawmaker Cyd Ho, who is currently on remand awaiting trial in a different case, and who was also a trustee, would also likely face the same charge.

The national security police confirmed they had arrested two men and two women aged 45 to 90, on suspicion of “conspiracy to collude with foreign powers.”

Zen was released after several hours of questioning, the Hong Kong Free Press said via its Twitter account.

The Vatican said in a statement reported by the Catholic News Agency that it was following the case closely.
“The Holy See has learned with concern the news of the arrest of Cardinal Zen and is following the development of the situation with extreme attention,” the Holy See press office said.
The 612 Humanitarian Relief Fund was set up on June 15, 2019, at the height of the anti-extradition movement that broadened to include demands for fully democratic elections and greater official accountability.

Its aim was to provide humanitarian relief in the form of funding for medical, psychological, legal and other necessary assistance to those injured or arrested during the police crackdown on the protest movement.

The fund disbanded in August 2021 because it no longer had access to a bank account because the Alliance for Democracy that had processed its funding had been suspended.

Both groups were later ordered to provide information to national security police on their sources of funding and their donors, under a draconian national security law imposed on Hong Kong by the ruling Chinese Communist Party (CCP) from July 1, 2020.

The law criminalized calls on the international community for sanctions on Hong Kong and Chinese officials, overseas lobbying or fundraising on behalf of the pro-democracy movement, and criticism of the authorities deemed to incite public anger or “hatred” against the government.

“We condemn the arrests of these activists whose supposed crime was funding legal aid for pro-democracy protesters back in 2019,” the group’s chief executive Benedict Rogers said in a statement on the group’s website.

“Today’s arrests signal beyond a doubt that Beijing intends to intensify its crackdown on basic rights and freedoms in Hong Kong,” the statement said. “We urge the international community to shine a light on this brutal crackdown and call for the immediate release of these activists.”

The Inter-Parliamentary Alliance on China (IPAC) also hit out at the arrests, which came days after pro-Beijing security hardliner John Lee was anointed leader of Hong Kong in a one-candidate election that analysts said erased most significant differences between the once free city and the Communist Party-run mainland.

“These arrests mark a new and deeply worrying phase in the crackdown upon what remains of Hong Kong’s civil society,” it said in a statement.

“John Lee, Hong Kong’s new chief executive, is posing a direct challenge to the international community and the autonomy promised to Hong Kong under international law,” IPAC said, calling for the immediate release of those arrested.

“Mere words are no longer enough,” it said. “We also call upon our governments to impose targeted sanctions on John Lee, and others involved in these persecutions.”

New York-based Human Rights Watch (HRW) also called for the immediate release of those arrested, and for the charges against them to be dropped, China researcher Maya Wang said via her Twitter account.

Meanwhile, a U.S.-based rights group went ahead with the 2022 Human Rights Press Awards after they were canceled by the Hong Kong Foreign Correspondents’ Club (FCC), citing legal risks under the national security law.

“On #WorldPressFreedomDay, we declare that the freedom of the press will NOT be canceled,” Campaign for Hong Kong founder and president Simon Chu said via Twitter. “Help recognize journalists who told the truth courageously and those who can no longer report freely.”

Xi is a ‘pathetic coward’

A petition calling on FCC president Keith Richburg to have a more public conversation about the controversial decision had garnered some 170 signatures its organizers said were journalists, including many former winners of the awards. (Disclosure: Richburg is a member of RFA’s board of directors).

“More than 170 journalists signed the petition, 25 are reportedly this years’ awardees & over 20 of us are the former winners of the Awards. We emailed the FCC on 29 April, 3 May and today,” a Twitter account called @lettertofcc said on May 10.

“I think we need to at least acknowledge that there are still journalists in Hong Kong who stick to their day-to-day reporting, and say that we stand with them, that we take note of them and their work, and thank them for that,” Yuen Chan, a senior lecturer on London’s City University journalism program, told RFA.

She said simply saying that press freedom was dead was too pessimistic an approach for people who are still working as journalists in the city.

Chu said that none of the journalists who showed up to receive awards at the May 10 ceremony were still working in Hong Kong, however.

“I would like to emphasize that we are holding this conference to fill the vacancy left by the organizers and record this year’s award-winning work,” Chu told the ceremony. “However, none of those willing to show up today are still in Hong Kong, plan to travel to Hong Kong, or have colleagues or family members in Hong Kong.”

The Hong Kong Free Press (HKFP) has reported that the FCC suspended the Human Rights Press Awards over concerns that several awardees this year worked at Stand News, a pro-democracy news outlet that was forced to close earlier this year after being investigated by the national security police.

Nine awards and commendations were handed out to former Stand journalists on May 10, although the number of entries had fallen sharply from previous years, organizers told the ceremony.

The FFC announced it was axing the prestigious Human Rights Press Awards in a statement to members last month.

“Over the last two years, journalists in Hong Kong have been operating under new ‘red lines’ on what is and is not permissible, but there remain significant areas of uncertainty and we do not wish unintentionally to violate the law,” Richburg said in the letter.

In Washington, meanwhile, U.S. Sen. Ben Sasse, a member of the Senate Select Committee on Intelligence, chastised Communist Party chief Xi Jinping and hailed the courage of Cardinal Zen and others.

“Chairman Xi – the world’s most powerful dictator – is absolutely terrified of a 90-year old Catholic cardinal. Xi is a pathetic coward,” he said in a statement.

“The Chinese Communist Party is afraid of truth-tellers and labels them threats to national security,” said Sasse.