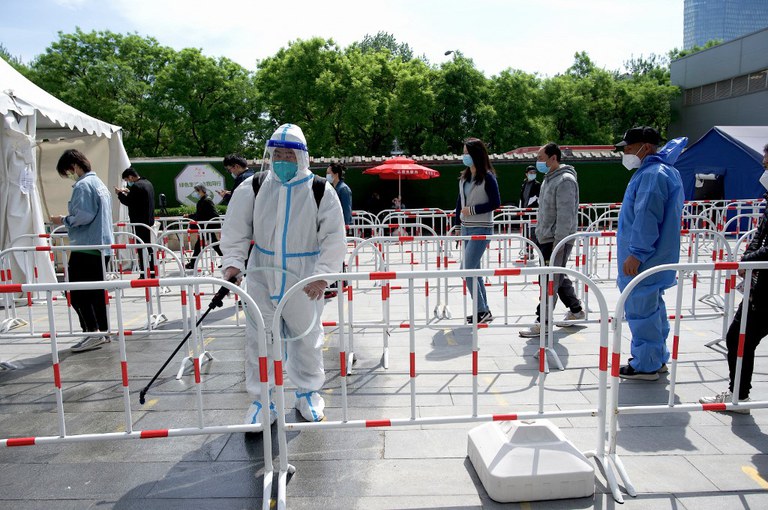 Ruling Chinese Communist Party (CCP) censors rushed to delete comments by the head of the World Health Organization (WHO) criticizing its zero-COVID policy as unsustainable from social media platforms in China on Wednesday.

WHO chief Tedros Adhanom Ghebreyesus called on China to change its approach, saying CCP leader Xi Jinping’s favored policy “will not be sustainable” in the face of new fast-spreading variants of the virus.

But foreign ministry spokesman Zhao Lijian hit back at a news conference on Wednesday.

“We hope the relevant individual can view Chinese COVID policy objectively and rationally and know the facts, instead of making irresponsible remarks,” Zhao said.

“When he speaks specifically about China, he should think whether his words will have a positive effect on promoting solidarity in the fight against COVID-19 in China,” Hu, a former editor-in-chief of the CCP-backed Global Times, said via his Twitter account.

Keyword searches on Weibo for “Tedros” in Chinese, as well as the equivalent abbreviation to WHO yielded no results on Wednesday, while users were unable to share an article about his comments from an official U.N. account, Agence France-Presse reported.

Prior to their deletion, Tedros’ comments had drawn a number of positive responses, with people wanting to know if the government would listen.

The censorship came as the majority of Shanghai’s 26 million residents remained under a grueling lockdown, walled into their apartment buildings and homes with steel fencing, with major transportation routes and services shut down, as many still struggled to access food, essential supplies and urgently needed medical treatment.

China insists that its zero-COVID strategy is the only way to prevent a massive death toll from COVID, as has been seen in other countries.

Researchers at Shanghai’s Fudan University published a paper in the scientific journal Nature on Tuesday saying that allowing the omicron variant to tear through the population would likely result in 1.6 million deaths and the collapse of rural healthcare systems.

But critics say the policy is the result of Xi wanting to boost his domestic image as a leader who can succeed by doing things differently from liberal democracies ahead of the CCP’s 20th National Congress later this year.

Lee Lung-teng, a high-ranking health minister in Taiwan’s government during the 2003 SARS epidemic, said Tedros appeared to be distancing himself from his previously cozy relationship with Beijing.

“He had been helping them clean up their image and acting as if they were doing it right, but maybe he is coming under pressure from someone else, who could be threatening to withdraw their support for him if he continues to be so biased in favor of China,” Lee told RFA.

“Maybe he can’t bear [not to speak out] any longer.”

“Everywhere else is gradually opening up, so isn’t it a bit strange that they are still talking about zero-COVID … when a situation with no infections would be impossible,” he said.

Ren Ruihong, former head of the medical assistance department at the Chinese Red Cross, said Xi is keen to tout his “victory” over the COVID-19 pandemic when he seeks an unprecedented third term in office at the 20th party congress.

“The 20th CCP National Congress is happening soon,” Ren said. “International focus is on whether or not Xi Jinping can get another term in office.”

“If he abandons the zero-COVID policy now, it will be tantamount to abandoning his own political platform … basically everyone understands that it’s a political necessity [for Xi].”

A Shanghai resident surnamed Ma agreed, saying the city’s officials seem to be constantly changing how they implement the zero-COVID directives from higher up.

“Nobody can figure out the rules. There aren’t any,” she said. “First they said we have to do a PCR test every five days, then it was seven.”

“We were supposed to be out of lockdown by May 1, but now it’s mid-May and we’re still not out of it; nobody knows when it will end now,” Ma said.

Shanghai residents are increasingly unwilling to toe the line on mass testing amid a string of false positives reported on social media.

“People aren’t scared of the virus at all now, but the rule of law has been completely destroyed,” Ma said. “The law is what the officials say it is.”

“There’s no humanity, even if you’re sick or elderly: I think it’s worse than during the Cultural Revolution,” she said.

In one video clip uploaded to social media, residents of Beicai township in Shanghai’s Pudong New District yell at officials for trying to get them to go to a makeshift “hospital” that was actually rows of tents.

“Is this a place to house human beings?” one person shouts. “These tents would blow over in a strong wind.”

Social media reports said private taxis are currently charging 3,000 yuan per pickup; 12,000 for airport transfers, after the city’s subway network was shut down.

People also posted video showing officials in full PPE removing food from a large refrigerator in an apartment they had allegedly come to “disinfect.”

Many social media accounts have been shut down permanently during the Shanghai lockdown.

Retired Shanghai teacher Gu Guoping said several of his accounts have been shut down after he criticized the government.

“My WeChat account has been blocked by the internet police and Tencent six or seven times, even after I changed my phone number,” Gu told RFA.

“This means that I have been cut of from various sources of information, and I have very limited access to information that is local to Shanghai,” he said.

The shutdowns came as the Shanghai Cyberspace Administration repeated calls for social media content users and censors to “regulate the release of information and group behavior … and vigorously resist unfounded online rumors.”

Meanwhile, border guards at Pudong International Airport have been told to step up the screening of anyone leaving the country, and to destroy any documents conferring residency status in other countries if found on Chinese nationals.

A screenshot from a law enforcement group chat said “anyone showing opposition to the CCP or hatred of China will not be allowed to leave the country.”

“Any permanent residence cards of other countries or large amounts of foreign currency or savings certificates in the luggage of people trying to leave the country with malicious intent will be destroyed on the spot,” it said.

“Team leaders must … strictly ensure that no fish slip through the net.”