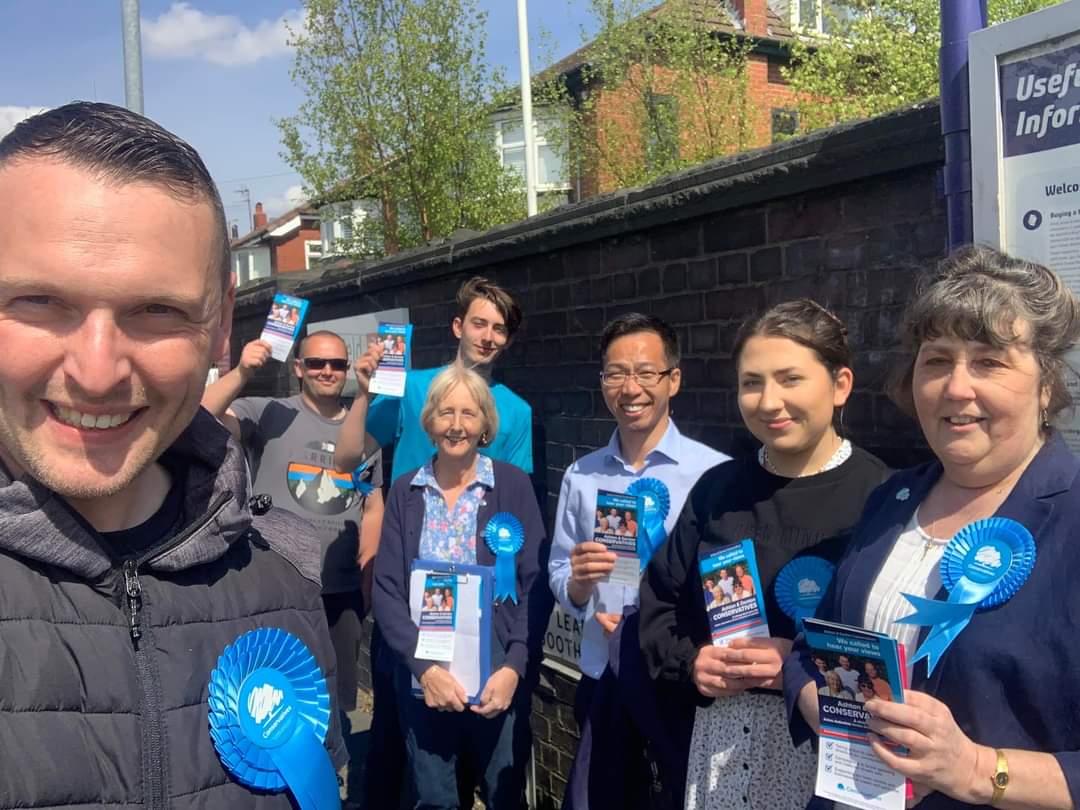 Timothy Cho and Jihyun Park are not typical British politicians. Their route to becoming candidates for the Conservative and Unionist Party in last week’s local elections began more than a decade ago when they escaped from North Korea.

Both Cho and Park ended up settling in Greater Manchester in 2008, naturalized as Britons, and after acclimating to a democratic society that offered a stark contrast to life they fled, sought the opportunity to represent their respective communities in the northwestern English city.

Although they were among a host of Conservatives to lose to Labour Party candidates in the May 5 election, both of the North Korean escapees told RFA’s Korean Service that they considered their campaigns to be a victory of sorts.

“I lost the election, but I feel like I have won. I feel like I have reached out to the people in my constituency, and I feel like they accepted and embraced me,” said Cho, who ran for a contested councilor seat of the Denton South ward of Greater Manchester’s Tameside borough.

In his race against Labour’s Claire Reid, Cho secured 35% of the vote, 9 percentage points higher than his first attempt last year to win a seat.

“The process of escaping from North Korea and coming here was a series of challenges, and I think this latest challenge is a beautiful race. I am so grateful to even run for office because I have experienced the flower of democracy,” Cho said.

“Since I was running for the same constituency, many of the voters recognized me. I could see that my opponent viewed me as a serious rival and was nervous from the start because there was a high chance that I would receive more votes than last year,” he said.

Cho also said he appreciated that his opponent publicly recognized him as a conservative candidate rather than simply as a “North Korean refugee” or “defector.”

He said he was especially proud to have been able to connect with the many low-income voters in his district through his own experiences growing up in extreme poverty in North Korea and the tough times he endured after settling in England in 2008.

When he arrived, Cho said he spoke no English, had few friends, and had to work his way through university. The freedom he was afforded in Britain, where his hard work translated into better opportunities, was a constant source of motivation, he said.

“The more I did, the more I thought of the people who remain in North Korea,” Cho said. “It really breaks my heart to think of my siblings, who are still in the darkness of North Korea. But if they lived in a free society like I do, they could be living the life I am living, and more politicians and businessmen would have come out our family,” said Cho.

“This is why I work harder.”

Cho said he plans to run for office again at the first opportunity. Until then he said he will continue advocating for North Korean human rights.

Jihyun Park didn’t win her race for one of three contested councilor seats in the Ramsbottom ward of Greater Manchester’s Bury borough — Labour candidates took all three slots — but Park felt good anyway because she said the election cemented her status as a Briton.

“I challenged myself with the heart of being British, and not to place myself as an outsider or as a stranger. I think a lot of people voted for that challenge,” she told RFA.

“I describe [my candidacy] as victory for humanity, because it gave a message to many people that the challenge was not a failure, but rather a personal victory,” she said. “I will continue to challenge myself.”

Park also ran in elections last year, but this year’s election was different. Because of redistricting, she was now trying to represent an area she does not herself live in.

She also was able to successfully become a candidate without the party nominating her, she introduced herself to the voters and was elected to represent the Conservatives on her own merits.

“Unlike in last year’s election, I was interviewed in front of the residents and became a candidate chosen by them which was very important to me and made me feel proud. The candidates were interviewed one by one to see what they could do for the people. I was glad and impressed that they chose me,” Park said.

Like Cho, Park said she chose to focus on the needs of the residents of Ramsbottom rather than her background. But her life as a North Korean refugee and rights activist did help, she said.

She characterized her candidacy as bringing a message of hope to the people, and she hopes one day to share her experiences of living in a democratic political system with North Koreans. She also used her platform to draw attention to the challenges of living in the country she fled from.

“I had conversations with election commission officials, and I said that in North Korea we never know where and how our votes are used and we do not have the right to vote,” she said.

Though North Korea holds elections, usually there is only one party-selected candidate running for each office. All able-bodied people are required to show up and vote for that candidate.

“I am so impressed by the system here in the United Kingdom, where everyone has the right to vote, and they can see how their votes are counted,” she said.

Many of the voters, she said, were surprised to learn she fled from North Korea.

She plans to return to her role as co-director of an advocacy group called Stepping Stones, which she founded in 2017 to raise awareness about human rights abuses in North Korea, in particular against women and children.

“Although I lost in the election, I’m saying it’s a victory for humanity because I realize once again how great it is to live in this place. I think I’ve done my best during this election because I have shown and told the people how precious it is to have the freedoms we enjoy here.”