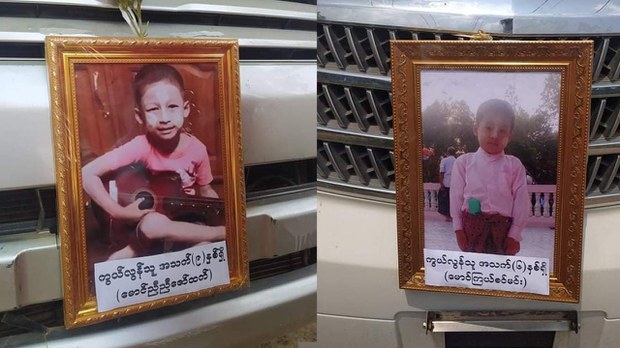 Security concerns led to a dramatic decline in the number of students who registered for the first university entrance exams in Myanmar since the military coup, sources said Thursday, citing ongoing unrest and armed conflict in the Southeast Asian nation.

The junta’s Ministry of Education that only 312,299 students had signed up for the exams during the 2021-2022 academic year.

The number represented a decrease of more than two-thirds from two years earlier, when 970,759 students registered. It also marked the first decline in registrants in at least seven years, when 632,314 students took the exams in 2014-2015 — a drop from the previous term but a number that is still twice as large as in 2021-2022. Exams were cancelled during the 2020-2021 academic year due to COVID-19 school closures.

This year’s exams, which are scheduled to run until April 9, are being held amid daily anti-junta bombings and public unrest throughout the country, and reports have emerged of the military blocking access to test sites.

A Yangon-based student who took the exam said parents are no longer allowed to wait for their children in front of test centers as in previous years.

“There was a large presence of soldiers and police outside,” she said, adding that students “just gave the answers to the exam questions quickly and left.”

Aung Kyaw, deputy permanent secretary of the Ministry of Education, told RFA that security measures had been strengthened to allow testing to proceed.

“We have coordinated with the health department and the security department,” he said. “All of our education ministry staff are also kept on standby. They are performing their duties. Security measures are in place and teachers have been working nonstop.”

The testing marked the end to a trying academic year. In addition to the coup, schools had to contend with a COVID-19 outbreak that forced their closure for four months. When they reopened on Nov. 1, many students did not return, both in protest of military rule and out of fear that they could be the subject of an anti-junta attack.

In Kayah state, where the military has encountered staunch resistance since launching offensives against armed ethnic groups and prodemocracy People’s Defense Force (PDF) paramilitaries, only 780 students had registered for this year’s matriculation exam. Since the coup, fighting in the region — which is home to around 290,000 people — has displaced more than 100,000 civilians, including many students.

Soe Mya, a student from Ngwedaung village, in Kayah’s Demawso township, told RFA she had to flee her home due to the fighting and was forced to miss the exam.

“Before the coup, I was ready to graduate and continue my schooling. My parents had made accommodation arrangements for me, and I had completed all of the necessary tutoring,” she said.

“Of course, I want to go to school when I see others going. But it wasn’t possible to apply for this exam as we’re currently on the run and sheltering in the jungle.”

Soe Mya said she had seen far fewer students taking university exams this year than in previous ones —particularly in Demawso, where clashes had occurred as recently as Thursday morning.

Some parents RFA spoke with said that they had simply refused to allow their children to attend school or sit for exams in protest of the military-run education system.

“Many schoolteachers are taking part in the [Civil Disobedience Movement] to protest the junta and we don’t like the teachers who replaced them,” said Khin Than Nu, a mother from Sagaing region, who said she had chosen to homeschool her children.

“We will continue their education when the country is at peace. In the meantime, there are many vocational training courses available on the internet and my children are also learning English online.”

According to the Ministry of Education, Rakhine state had the highest registration rate of students for the academic year at 45,592, followed by Yangon region with 37,560, and Mandalay with 37,202. Kayah state’s 780 registrants was the lowest of any region.

Parents told RFA that despite the number of registrants, they expect the actual number of students who take this year’s university exams will be lower.

When asked how many students had taken the exam on Thursday, a Ministry of Education official told RFA he did not know the exact number.

While Myanmar’s coup and political upheaval have severely impacted access to education for the country’s youth, they have also put them at greater personal risk in their daily lives.

According to Thailand’s Assistance Association of Political Prisoners, authorities in Myanmar have killed at least 1,723 civilians and arrested 10,000 others since the coup — mostly during peaceful anti-junta protests.

A recent investigation by RFA found that more than 100 of those killed were under the age of 18.

Sources described victims that included a six-year-old who died as he slept when junta troops shelled his village in Magway region’s Yezagyo township on the night of March 26, four teenagers who were among 11 people discovered burned to death by soldiers in Sagaing region’s Salingyi township on Dec. 7, 2021, and a 12-year-old boy who was shot dead by authorities in Sagaing’s Shwebo township on March 27 last year.

RFA also confirmed the deaths of youths who were killed while participating in anti-junta protests, while detained on suspicion of involvement with the PDF or the country’s shadow National Unity Government (NUG) and as the result of stray bullets and artillery fire.

A resident of Salingyi’s Dontaw village, where the burned corpses were discovered in December, condemned what he said was the senseless killing of innocent youths.

“These soldiers care little of the rights of children because the junta is trying to do whatever it can to harm the people. They don’t care whether people are young or old,” he said, speaking on condition of anonymity.

“We do not want innocent people — especially children — to have to suffer anymore.”

The number of victims confirmed by RFA are in line with that of the NUG’s Ministry of Women, Youth and Children, which said in a statement earlier this month that 110 youths had been killed between Feb. 1, 2021, and March 1 this year.

Similarly, a report submitted on March 21 to the United Nations Human Rights Council by Tom Andrews, the U.N. special rapporteur on Burma, found that “at least 100 children” had been killed and more than 100 remain missing in just over a year of military rule.

When asked about the deaths, junta Deputy Information Minister Maj. Gen. Zaw Min Tun told RFA there was no reason for the military to target children.

“Whenever there is fighting involving countries where these accusers are based, children as well as old men and women are killed. If you don’t believe me, look at what happened during the Vietnam War. Now [these governments] are accusing us of these acts,” he said.

“The current government is working for stability, peace and the rule of law.”

“In this age of information, their lies will be ineffective. We also have evidence and witnesses,” she said.

Myanmar ratified the U.N. Convention on the Rights of the Child on Aug. 15, 1991. In 2019, under the National League for Democracy government, former President Win Myint signed and ratified the Children’s Rights Law to ensure the full protection of children in accordance with the convention, and observers say the junta has acted in violation of the law.