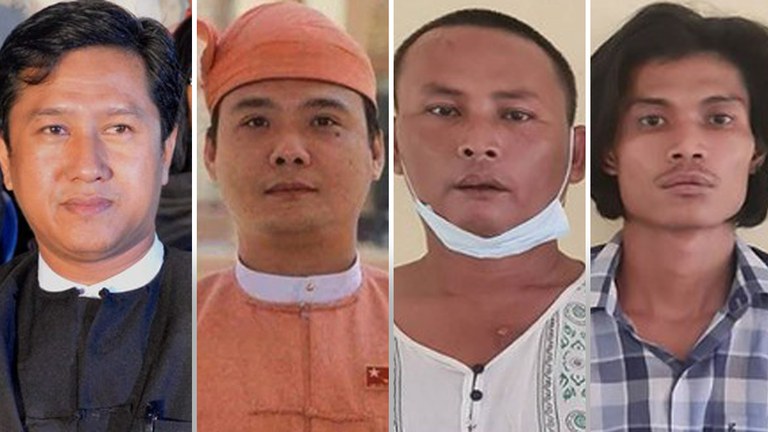 The families of 77 political activists sentenced to death by Myanmar’s military junta say they live in fear that their loved ones will be executed without warning after the military regime hanged four prominent prisoners of conscience.

Frustration with the junta boiled over last week after it put to death veteran democracy activist Ko Jimmy and former opposition lawmaker Phyo Zeya Thaw, as well as activists Hla Myo Aung and Aung Thura Zaw, despite a direct appeal from Hun Sen to Min Aung Hlaing. The executions prompted protests in Myanmar and condemnation abroad.

On Thursday, the daughter of a 56-year-old former junta soldier sentenced to death for allegedly helping pro-democracy People’s Defense Force (PDF) paramilitaries told RFA Burmese that she can’t bear to think that her father might be executed at any point without her knowing.

“As a family member, there is no way I could accept that my father might die all of a sudden,” she said, speaking on condition of anonymity.

“They gave him the death sentence, but did he deserve it? He had no involvement [in the anti-junta protests]. I think it is completely unfair that he was given the death penalty just for planning to get involved.”

She claimed that her father was arrested by the military without having committed any crime and was sentenced to death by a military court without having the opportunity to defend himself legally.

She urged the junta to let her father serve out a life sentence in prison, noting that he is a veteran soldier who spent many years in the military.

Prior to last week, only three people had been executed in Myanmar in the past 50 years: student leader Salai Tin Maung Oo, who helped organize protests over the government’s refusal to grant a state funeral to former U.N. Secretary-General U Thant in 1974; Capt. Ohn Kyaw Myint, who was found guilty of an assassination plot on the life of dictator Gen. Ne Win; and Zimbo, a North Korean agent who bombed the Martyrs’ Mausoleum in Yangon in an attempted assassination of the visiting South Korean President Chin Doo-hwan in 1983.

In the more than 30 years between Myanmar’s 1988 democratic uprising and the military coup of Feb. 1, 2021, death sentences have been ordered, but no judicial executions were carried out. Thailand’s Assistance Association for Political Prisoners (AAPP) has said at least 77 people are currently sentenced to death in Myanmar.

Legal experts have noted that only the country’s democratically elected head of state has the right to order an execution under existing laws.

Aung Thein, a High Court lawyer from Yangon, said coup leader Sr. Gen. Min Aung Hlaing considers himself Myanmar’s head of state and that carrying out the death penalty is his right.

“[The junta hasn’t] disposed of the 2008 [military-drafted] Constitution. It has only been suspended,” he said.

“Since they have said they are operating according to the 2008 Constitution, [Min Aung Hlaing] believes the responsibility of head of state falls to him. That’s why he might be under the impression that he can order executions.”

A lawyer from Yangon, who asked not to be named for security reasons, said that the hanging of a person considered a political challenger to the military appears more like “revenge” than anything legally justifiable.

“Things have gone from political repression to military repression,” the lawyer said. “When a rivalry becomes intense, the execution of the opposition by a rival organization can be seen more as revenge than legal action.”

He told a press conference in the capital Naypyidaw a few days after the executions that ideally the junta would have killed the four more than once.

Aung Myo Min, human rights minister for Myanmar’s shadow National Unity Government (NUG), said the unlawful arrest and execution of the opposition under unjust laws is the same thing as “murder in prison.”

He expressed concern that last week’s executions would lead to more “official” killings in the country’s prisons.

“For a military regime which sees the people as the enemy and kills them wherever they like, executing people in prison is not very unusual. In fact, this is not the death penalty. This is murder in prison, as it is based on unjust laws and unsubstantiated cases and verdicts. After these executions, we worry that the junta may continue, using it as a precedent.”

A mother whose son was recently sentenced to death in Yangon’s Insein prison told RFA she can only pray that no other family members of those on death row be forced to experience such a tragedy.

“It’s not good in my heart. I don’t know how to describe it,” she said.

“There is anxiety because I’m afraid [another execution] will happen. Nobody wants that to happen. I’m praying that it won’t. … I pray for the speedy release of these young kids.”

The current rotating chairman of the Association of Southeast Asian Nations (ASEAN), Cambodian Prime Minister Hun Sen, told a meeting of the bloc’s foreign ministers in Phnom Penh on Wednesday that if political prisoners continue to be executed in Myanmar, he would be forced to “reconsider ASEAN’s role” in mediating the country’s political crisis.

Under an agreement Min Aung Hlaing made with ASEAN in April 2021 during an emergency meeting on the situation in Myanmar, known as the Five-Point Consensus (5PC), the bloc’s member nations called for an end to violence, constructive dialogue among all parties, and the mediation of such talks by a special ASEAN envoy. The 5PC also calls for the provision of ASEAN-coordinated humanitarian assistance and a visit to Myanmar by an ASEAN delegation to meet with all parties.

Even Min Aung Hlaing acknowledged that the junta had failed to hold up its end of the bargain on the consensus in a televised speech on Monday in which he announced that the junta was extending by six months the state of emergency it declared following last year’s coup. He blamed the coronavirus pandemic and “political instability” for the failure and said he will implement “what we can” from the 5PC this year, provided it does not “jeopardize the country’s sovereignty.”

Foreign Minister of Singapore Vivian Balakrishnan, who is attending the ASEAN meeting in Cambodia, publicly stated on Thursday that further discussion between the bloc and the junta “would not be beneficial” if there is no progress made in the implementation of the 5PC.