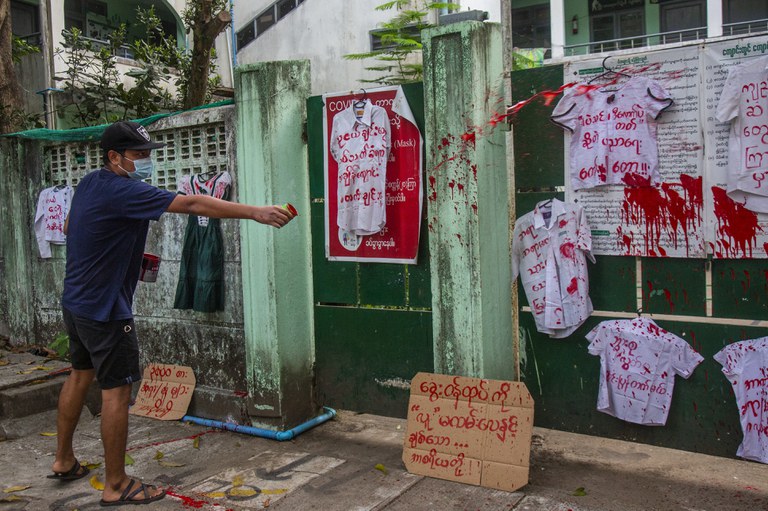 Myanmar’s junta reopened basic education schools across the country for the 2022-2023 academic year on Thursday with student enrollment levels surpassing those from a year earlier, when the pandemic and a teacher boycott of the military regime kept kids at home, according to parents and residents.

In the commercial capital Yangon, the number of students attending primary schools saw a noticeable uptick, residents said, while security at the city’s educational centers was tighter than the previous year.

Yangon taxi driver Than Win estimated that “around 50% of the children” went to school on the first day of classes, based on what he had seen driving through five of the city’s townships Thursday morning.

“Very few were in school uniforms — maybe 20% or so,” he told RFA’s Burmese Service, suggesting they didn’t want to be seen as supporting junta rule.

Parents said more children are attending school this year than last. Schools were closed in 2021 due to coronavirus restrictions and the military’s Feb. 1, 2021, coup, which prompted many teachers to leave their jobs and join the anti-junta Civil Disobedience Movement.

Wai Wai, a mother from Yangon’s Twante township, told RFA that her 7-year-old daughter attended her first day of kindergarten classes on Thursday.

“I thought there’d be no one at school but many people came — all the kids were wearing their white and green school uniforms. Last year, the children did not dare to wear white and green,” she said. “One teacher told me she had only three students in her class last year, but today she had 30.”

The junta announced that 5.6 million students had enrolled nationwide for the current academic year, most of whom are based in Yangon region, the capital Naypyidaw and Mon state.

Despite the increase in enrollment, many parents said they would continue to boycott junta-run schools. The country’s shadow National Unity Government (NUG) recently said it is working to provide classes for school-age children of parents led by CDM teachers.

Mon Mon, a resident of Magway region’s Yezagyo township, told RFA her 7-year-old son will attend NUG-run classes this spring instead of school.

“There’s no school for my son this year because we don’t want to support the junta’s education system,” she said.

“I plan to send my son to classes run by the Spring Revolution NUG. We will find a school where CDM teachers teach. Another reason [he won’t attend] is that we feel sorry for children in war-torn areas who cannot go to school and sympathize with them.”

The junta invited CDM teachers to return to work with no repercussions by May 31 and recently extended its offer to June 7.

Kyaw Min Khant, an official with the All Myanmar Teachers’ Federation, confirmed to RFA that enrollment in schools in many of the country’s regions and states is around 50% higher than last year.

“We have seen a significant increase in enrollment over the past year,” he said.

“Many parents have realized that they need to keep their children in school. … They know that their kids will be much older if they wait for the country’s political stalemate to be solved before they return, so they are willing to separate their politics from their children’s education.”

According to Kyaw Min Khant, 11 million children were eligible to attend school nationwide in 2021, while the number had increased to around 13 million this year, with some 80% in attendance.