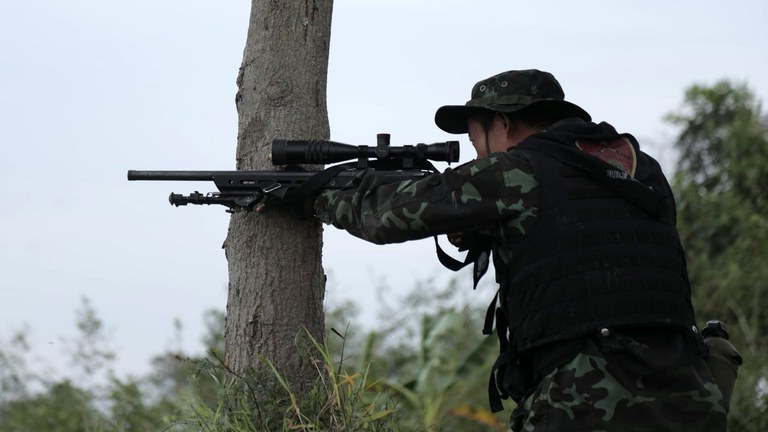 Pro-military Pyu Saw Htee militiamen and anti-junta People’s Defense Force (PDF) paramilitaries are engaged in what will likely become a protracted conflict in Myanmar with no formal process in place to mediate between the two civilian proxy armies, an analyst said Wednesday.

In September, Myanmar’s shadow National Unity Government (NUG) declared war on the junta and ordered allied PDF groups around the country — formed to protect civilians from the military in the aftermath of its Feb. 1, 2021, coup — to attack junta targets.

In areas where the PDFs were the strongest, such as in Magway and Sagaing regions in the north and west, the junta armed and trained groups of citizens who support military rule, forming the militia groups now known as the Pyu Saw Htee. The militia — whose name is derived from Pyusawhti, the legendary founder of the first Burmese kingdom — was given carte blanche to make arrests, seize property, kill PDF members and destroy villages, sources have told RFA’s Myanmar Service.

More than 15 months since the military takeover, the two proxy forces have grown substantially and regularly clash throughout the country, where many of their fighters live virtually side by side as residents of neighboring townships and villages that support either the NUG or the junta.

Min Zaw Oo, executive director of the Myanmar Institute for Peace and Security (MIPS), said that even if the junta and the NUG hammer out a resolution to Myanmar’s political crisis, the conflict between the Pyu Saw Htee and the PDF may well continue far into the future.

“These are conflicts that are not easily ended,” he said.

“It’s different from dying in a battle — war can end if a ceasefire is agreed to by two armies. … But such killing between civilians is not easily forgotten. This is a problem that will remain for decades to come. The mistrust will fester and remain a black mark on our society.”

Observers say that between 150 and 200 civilians are killed each month in Myanmar — not on the battlefield, but during violent raids on villages that have in some cases resulted in massacres.

The Institute for Strategy and Policy (ISP Myanmar), an independent research group, recently said it had documented the killing of at least 5,646 civilians across the country between the time of the coup and May 10, 2022.

The current chaos is the result of the junta’s failure to control the violence, whether willingly or not, Min Zaw Oo said.

Despite international pressure to defuse the situation through inclusive talks with all of Myanmar’s stakeholders, the junta has not only refused to meet with the NUG, which it calls a “terrorist organization,” it is forcibly “recruiting” Pyu Saw Htee fighters to battle the PDF in regions such as Sagaing and Magway, sources said Wednesday.

Moe Gyi, a resident of Kan Doe village in Magway’s Gangaw township, told RFA that a joint force of junta troops and Pyu Saw Htee fighters entered the tract on May 13 and ordered people there to form a militia.

“They told us to form a Pyu Saw Htee group within a week and said they would set the village on fire if we didn’t do so,” he said.

According to Moe Gyi, a Buddhist monk from the village refused, and the junta forces promised to return in seven days.

“There will be violence,” he said, adding that many residents have fled in fear of the military, which is “expanding their control to the south” of the township through the formation of Pyu Saw Htee militias.

Other sources told RFA that the junta has provided training and weapons to the Pyu Saw Htee in Gangaw’s nearby Myauk Khin Yan and Han Thar Wa Di villages under the direction of “Bullet” Hla Swe, a former member of Parliament for the military proxy Union Solidarity and Development Party (USDP).

USDP spokesperson Nanda Hla Myint said that although the party has not instructed its members to attack the PDF, it would “not stop” those who do.

“We don’t have a party policy directing members to take up arms,” he said. “But it is their right to participate in programs set down by the local authorities, depending on the security situation in their area, so we have nothing to say about it.”

Reports of forced recruitment into pro-junta militias were echoed by a resident of Sagaing’s Pale township named Zaw Zaw, who told RFA on Wednesday that fighters from two Pyu Saw Htee camps in the villages of Imahtee and Zeebyugone have threatened to harm area inhabitants if they do not fight the PDF.

“People were told that food and water supplies will be cut off if they do not take up arms,” he said, adding that the junta is “exploiting” them because it does not even bother to maintain lists of Pyu Saw Htee fighters killed in operations against the PDF.

‘Working for the peace of the community’

The junta has repeatedly denied reports that it is behind the expansion of the Pyu Saw Htee, insisting that villagers are willingly and independently forming militia units to protect themselves from the PDF.

“If there is a real need, we will provide training,” he said.

“During the training, we teach them not only how to shoot but also what rules to follow, as well as the duties and responsibilities that any ordinary soldier should know. We are working for the peace of the community in a systematic way.”

Zaw Min Tun said PDF groups “often attack villages when they hear that a militia unit has been formed,” and that they frequently “set them on fire when they withdraw,” then blame the military for the destruction.

Tun Tun Oo, the leader of the Kani Township PDF in Sagaing region, told RFA that the expansion of the Pyu Saw Htee militias would not deter the opposition from its goal of unseating the junta.

“These Pyu Saw Htees have not affected the revolution in general,” he said. “They will gradually disappear. But for the time being, the junta will continue to use them.”