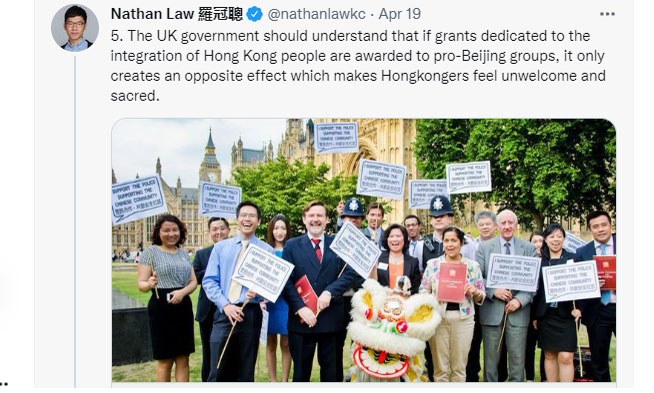 Hong Kong activists based in the U.K. have repeated warnings that community groups in the county may have been infiltrated by people loyal to the Chinese Communist Party (CCP), posing potential threats to incoming migrants from Hong Kong under the British National Overseas (BNO) visa scheme.

Former Hong Kong lawmaker Nathan Law said via his Twitter account on April 19 that most the of 100,000 people who have left the city following the imposition of the draconian national security law to make new lives in the  U.K. support the 2019 mass protest movement, which called for fully democratic elections and greater official accountability.

“HKers are anxious and insecure. Most of them are in support of the pro-democracy movement, therefore they left Hong Kong with trauma and worries of persecution,” Law wrote. “They fear that Chinese agents in the UK would send their activity records back to Hong Kong, thus endangering them.”

Law voiced his concerns as The Times reported that pro-CCP figures appeared to have infiltrated large Chinese community organizations in Southampton and Birmingham, both of which have received tens of thousands of pounds in government funding to help newly arrived Hongkongers integrate into British society.

Law added: “The Chinese govt is a dictatorial regime that destroyed our home. Many Chinese community organizations in the UK support the political lines of CCP. More than 200 of them endorsed the National Security Law,” he said, adding that Hongkongers would feel “scared and unwelcome” if government funds were awarded to such groups.

According to The Times, two of the Birmingham center’s directors worked with the British Chinese Project, a scheme founded by Christine Lee, a lawyer who MI5 warned was trying to influence parliamentarians on behalf of Beijing in January 2022.

A patron of the center, James Wong, has visited China on a trip sponsored by the Overseas Chinese Affairs Office, part of the CCP’s outreach and influence operation known as the United Front Work Department. The Birmingham Chinese Community Center denied it was under CCP influence, saying it had no wish to be drawn into the politics of the Hong Kong protest movement, and had no wish to become involved with such “toxicity.”

Meanwhile, U.K.-based activist Ping Hua, who has termed reports of the mass incarceration of Uyghurs in Xinjiang “appalling lies and fabrication,” founded the Southampton group, which told the paper she is no longer part of the organization.

Law tweeted a day after being quoted in the article: “We must know more about the infiltration activities of the Chinese govt and prevent these mistakes from happening. The best way is to engage with the UK-based Hong Kong community and conduct thorough background checks on the org’s connection to the Chinese embassy.”

U.K. activist and former consular worker Simon Cheng said that while the links between Wong and Ping and the CCP were fairly clear, many other Chinese community organizations have made statements that suggest where their allegiances lie, even if connections with the CCP are harder to trace.

“They want to carefully blunt our democratic consciousness and fighting spirit,” Cheng said. “For example, they could, once people have settled in, encourage them to move on from the past.”

“If they really have a pro-CCP agenda, or are United Front, the most important concern is that they could report people’s personal information to the national security police [in Hong Kong],” he said. “Then, you could run into problems if you go back to Hong Kong, or to any country that has a current extradition treaty with either China or Hong Kong.”

According to a 2017 report by New Zealand political science professor Anne-Marie Brady, Chinese leader Xi Jinping is leading an accelerated expansion of political influence activities worldwide, much of which rely on overseas community and business groups, under the aegis of the United Front Work Department.

Some 100,000 Hongkongers have emigrated to the U.K. under a pathway-to-citizenship visa scheme aimed at around three million people eligible for the BNO passport.

Community groups have sprung into action to offer career, job-hunting and taxation workshops to new arrivals, provide entertainment and social opportunities and to offer advice on education, mental health and starting a new business.

All are members of chief executive Carrie Lam’s cabinet, the Executive Council, and are collectively responsible for implementing the national security law, which bans public criticism of the government and criminalizes acts of political opposition, journalism and online dissent.

All of the officials and lawmakers in question have pledged allegiance to Beijing and expressed their public support for the national security law, the report said.

The group’s senior policy adviser Sam Goodman said: “The Hong Kong officials and lawmakers who are complicit in the ongoing human rights crackdown in Hong Kong are more than happy to continue to use the West as a safe haven for their hidden wealth.”