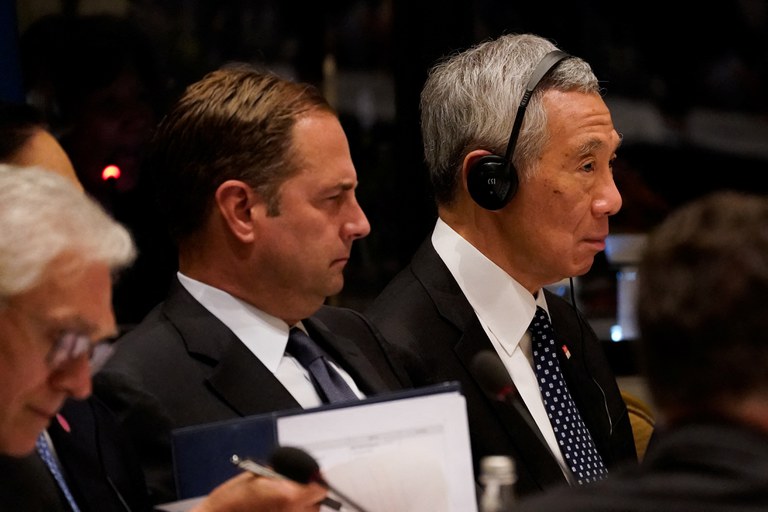 Beijing has slammed the U.S.-proposed Indo-Pacific Economic Framework (IPEF), calling it an attempt by Washington to lure Southeast Asian countries to “decouple from China.”

U.S. President Joe Biden has been hosting a special two-day summit with leaders from the Association of Southeast Asian Nations (ASEAN) that ends Friday. At the summit, it’s expected that the U.S. will share more details of the framework, which is likely to get its official launch later this month when Biden visits South Korea and Japan.

It’s not a free trade pact in the mold of the Trans-Pacific Partnership that the Obama administration championed and negotiated for years as part of its foreign policy ‘pivot’ to Asia, only to see the Trump administration ditch it. An iteration of the same deal was later adopted by other Pacific Rim nations.

But the IPEF does seeks to foster ties with economic partners in the Indo-Pacific by setting trade rules and building a supply chain, without China.

In the words of President Biden at the East Asia Summit last year, the IPEF involves “trade facilitation, standards for the digital economy and technology, supply chain resiliency, decarbonization and clean energy, infrastructure, worker standards, and other areas of shared interest.”

On Thursday, Beijing warned Washington that the Asia-Pacific is “not a chessboard for geopolitical contest” and any regional cooperation framework should “follow the principle of respecting others’ sovereignty and non-interference in others’ internal affairs.”

The People’s Daily, the mouthpiece of China’s Communist Party, said in an editorial that the IPEF is designed to “make up for the shortcomings of Washington’s previous engagement with Southeast Asia, which focused only on security and ignored the economy.”

“The U.S. holds profound political and strategic objectives aimed at forcing countries to decouple from China,” the paper quoted some analysts as saying.

The gathering in Washington is the second U.S.-ASEAN special summit since 2016, when then-President Barack Obama hosted leaders of the bloc in Sunnylands, California.

ASEAN leaders, minus Myanmar and the Philippines, attended a White House dinner with Biden on Thursday and met with a host of U.S. political and business leaders, but had no bilateral meetings with the U.S. president. Leaders were meeting with Biden and Vice President Kamala Harris on Friday at the State Department.

There are 10 ASEAN member states but Myanmar’s junta was not invited to the summit and the Philippines, which held a presidential election last weekend, only sent its foreign minister.

Speaking at an engagement with the U.S.-ASEAN Business Council and the U.S. Chamber of Commerce on Thursday, Lee said that the IPEF “needs to be inclusive and provide tangible benefits to encourage wider participation.”

“We encourage greater ASEAN participation in the IPEF and we hope the U.S. will directly invite and engage ASEAN member states in this endeavor,” he said.

At present, it’s understood that only two of the 10 ASEAN countries – Singapore and the Philippines – are expected to be among the initial group of counties to sign up for the negotiations under IPEF.

“Most ASEAN members have remained hesitant to voice support for Biden’s IPEF, which is, to their perceptions, a counterweight against China’s Belt and Road Initiative in specific and Beijing’s economic coercion in general,” said Huynh Tam Sang, a lecturer at Ho Chi Minh City University of Social Sciences and Humanities (USSH) in Vietnam.

“Given the economic proximity to China, ASEAN member states have sought to avoid provoking Beijing, let alone getting embedded in the Sino-U.S. competition,” Sang said.

Yet judging from prepared statements and initial feedback from ASEAN leaders on the prospects of ASEAN-U.S. economic cooperation and the IPEF, “they do not only value the substance of the relationship but are eager to see it grow,” according to Thomas Daniel, a senior fellow at Malaysia’s Institute of Strategic and International Studies.

“Unfortunately, Washington is still unable to fully grasp or address the desire in Southeast Asia for practical dimensions that will bring an immediate and tangible benefit to local economies and communities,” he said.

On Thursday, Malaysian Prime Minister Ismail Sabri Yaakob urged the U.S. to adopt a more active trade and investment agenda with ASEAN countries. He pointed to the Chinese-backed Regional Economic Comprehensive Partnership, which took effect this year, as an important tool to invigorate regional business and economic activity through reduced trade barriers.

Seeking to offer concrete benefits at the summit, Biden offered US$150 million for ASEAN infrastructure, security, pandemic preparedness and other efforts.

More division in the bloc?

Details of the IPEF remain vague but policymakers in Washington have said that they’re designing a framework to prioritize flexibility and inclusion, with a pick-and-choose arrangement for participating countries, allowing them to select the individual areas where they want to make more specific commitments.

An analysis by the Washington-based Center for Strategic and International Studies (CSIS) said while the IPEF holds promise, “it will need to be well engineered and managed.”

“Wherever possible, the framework should seek to advance binding rules and hard commitments that go beyond broad principles and goals,” the CSIS said.

At the same time, “the Biden administration will need to offer tangible benefits to regional partners, especially less-developed ones,” according to the analysis.

There are warnings that the proposed framework, if not carefully considered, may even create a bigger gap between countries in the Southeast Asian region.

“Middle and small powers in Southeast Asia are likely to embrace a prudent approach when coming to great powers’ proposed initiatives, especially when these multilateral frameworks could undermine ASEAN centrality,” said Sang from Vietnam’s USSH.

Countries like Singapore, the Philippines and Malaysia may seek to join some “pillars” that could serve their pragmatic interests but “China may seek to discourage regional small states about forging ties with Washington through partaking in the IPEF.”

Sang said that could in particular pose a dilemma for Laos and Cambodia, which may not want to left out, but have deep and growing economic ties with China.