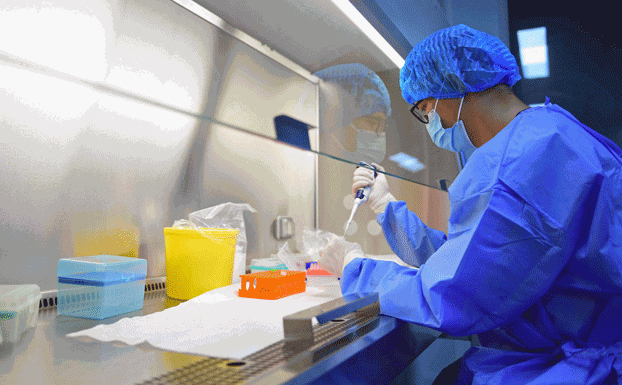 A sharp increase in the number of coronavirus cases in Xinjiang led China’s government to send a delegation throughout the far-western region to implement controversial zero-COVID policies, further isolating residents there.

As of Wednesday, Xinjiang recorded 2,779 confirmed COVID-19 cases throughout Xinjiang, with officials in the capital Urumqi (in Chinese, Wulumuqi) designating 73 high risk districts and imposing strict exit-entry controls due to the rising number of infections, China News Service reported.

Now officials there are administering a new Chinese medicine called “A Ci Fu” to combat the virus, though the efficacy of the medicine remains unknown, sources said.

Erkin Tuniyaz, a Chinese politician of Uyghur origin who is the current XUAR chairman, visited Kashgar (Kashgar) during the same period.

The two officials oversaw the implementation of mass testing and lockdowns to contain outbreaks of the respiratory virus.

In the Ili Kazakh Autonomous Prefecture in northern Xinjiang, Ma stressed the need to implement Chinese President Xi Jinping’s instructions on epidemic prevention and control and stressed the need for urgency. He called for delineating risk areas and implementing detailed prevention and control measures, as well as increasing screening and accelerating construction of makeshift hospitals, Chinese media reported.

But Uyghurs said the lockdowns implemented to contain COVID are causing problems of their own.

For example, a Turpan resident told RFA that farmers are unable to pick their grapes, leaving the fruit to rot in fields and causing huge financial losses.

“We are desolate,” he said. “We really hope this pandemic will disappear soon, so we are able to gather our grapes safely and hang them in drying rooms.”

A Uyghur on Douyin, the Chinese version of the short-form, video-sharing app TikTok, said many people in the affected areas are unable to afford food because they are not able to work. Food prices have also gone up because of the lockdowns, the source said.

A police official in Ghulja county’s Hudiyayuzi township said officials were directed to warn residents to be careful what they say or believe in regards to the COVID outbreak.

“We will investigate and detain those who spread rumors,” the officer said.

William Nee, research and advocacy coordinator at Chinese Human Rights Defenders, told RFA on Monday that the lockdowns were likely particularly hard on Uyghurs in Xinjiang given the isolation many already lived under.

Shanghai residents endured a three-month lockdown. But those who were confined to apartments could at least communicate their plight to the outside world via  cell phones or through social media. Chinese repression in Xinjiang doesn’t give Uyghurs a similar outlet.

“We have much less knowledge about how the zero-COVID policies are affecting people,” he said, adding that he saw a video recorded by a Han Chinese woman in Kashgar showing that the city was deadly quiet.

“I’m sure she could run that risk without any problems, but if a Uyghur were to produce that type of video, I’m sure they would be detained on some pretext,” Nee said. “So one of the difficulties is that any negative ramifications of the zero-COVID policy affecting Uyghurs and other ethnic minorities would be that they [are] reluctant to share [information] because it could be seen as a political offense.”

The number of COVID-19 cases are also on the rise in neighboring Tibet Autonomous Region (TAR).

As of Wednesday, the region recorded 2,911 confirmed cases, 742 more than were reported on Tuesday, according to an official count.

“People are subject to continuous testing,” said a Tibetan living in the capital Lhasa. “The Potala Palace and other religious sites are shut down, schools have postponed their reopening, and people are stocking up on groceries and buying face masks.”

Tens of thousands of Chinese tourists stranded in the capital Lhasa and the towns of Shigatse (Xigaze) and Ngari (Ali) are trying to leave Tibet.

On Tuesday, the TAR’s Transportation Department announced that those who are leaving the region by air or train must take two COVID tests within 24 hours of their departure and have a certificate indicating negative results.

A Tibetan in the region told RFA that resources for the testing and prevention of the virus are being depleted due to the high number of Chinese tourists there.

Nee said that video of workers spraying down roads in Tibet with disinfectant had no scientific basis as being an effective means of preventing the coronavirus, and only serve a performative purpose to make people believe that officials are doing everything possible in terms of a zero-COVID policy to please Xi Jinping.

Though the number of cases has spiked in Tibetan cities in recent days, airports in the region, including Lhasa Gonggar Airport, have remained open and the influx of tourists has continued without restriction.

“During earlier COVID surges, the Chinese government did not restrict tourists from entering Tibet because Tibetans were concerned,” said another Tibetan from Lhasa. “Now as COVID outbreaks are increasing and the situation remains uncertain, we are worried about to how it will turn out in the next few days.”

Earlier this week, a Chinese official in Lhasa issued a notice warning residents not to share any COVID-related news or information on social media.

Translated by Mamatjan Juma and Alim Seytoff for RFA Uyghur, and Kalden Lodoe and Tenzin Dickyi for RFA Tibetan. Written in English by Roseanne Gerin.