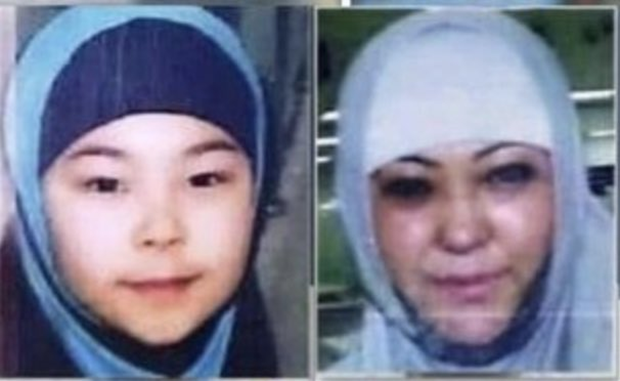 The Chinese Communist Party (CCP)’s law enforcement agencies routinely track, harass, threaten and repatriate people who flee the country, many of them Turkic-speaking Uyghurs, under its SkyNet surveillance program that reaches far beyond China’s borders, using a variety of means to have them forcibly repatriated.

A video clip of a Uyghur mother and her 13-year-old daughter crying for help after being detained in Saudi Arabia and told they would be sent to China recently surfaced on social media, highlighting China’s use of pliant allies to circumvent criminal justice processes and ensure political refugees and Muslims are sent back.

The Safeguard Defenders rights group has called on the Saudi authorities to release Abla Buhelchem and her daughter Babure Miremet immediately, as well as two other Uyghur men being held without charge by Saudi police.

“We call on Saudi authorities to immediately release four Uyghurs – including a 13-year-old girl and her mother – who are at grave risk of enforced disappearance, torture and forced separation if sent back to China,” the group said in a statement on its website.

Abla Buhelchem and her daughter were detained near Mecca and told by police they would be sent back to China along with Abla Buhelchem’s ex-husband Nurmemet Rozi and Hemdulla Weli, both of whom have been detained without charge since November 2020.

Rozi and Weli were both in Saudi Arabian on pilgrimage, an act that the CCP deems “extremist” along with many other required expressions of Islamic faith, and were detained at the request of the Chinese embassy.

It said the two men were moved from the detention center where they were being held in March 2022, and their whereabouts are currently unknown.

On Friday, April 1, United Nations legal experts said the four should on no account be sent to China.

“The prohibition of refoulement is absolute and non-derogable under international human rights and refugee law,” the statement said. “States are obliged not to remove any individual from their territory when there are substantial grounds for believing that the person could be subjected to serious human rights violations in the State of destination, including, where applicable, the existence in the State concerned of a consistent pattern of gross, flagrant or mass violations of human rights.”

“At that time, she had already arrived at the detention center in Riyadh,” Ayup said.

“She said she was waiting for the Chinese embassy personnel. She said that she was told that she would be deported in three hours. She kept crying.”

Abduweli, a person familiar with the situation, said all four were still in detention in Saudi Arabia as of April 28. He said he had tried to warn Abla Buhelchem of the danger, and advised her to leave the country, but she wanted to stay and tell her ex-husband’s story to the international community, fearing he would disappear and be forgotten about.

“My friends who work in the Saudi government told me privately that Uyghurs shouldn’t come to Saudi Arabia.”

“As far as I know, there has been no clear accusation until now, and the officials have not explained why they were arbitrarily arrested without any documentation,” Abduweli said. “This is very strange.”

Lynn Maalouf, Amnesty International secretary-general for the Middle East and North Africa, said the forcible repatriation of the four Uyghurs was “unconscionable,” and a violation of Saudi Arabia’s obligations in international law.

“In China, they will be arbitrarily detained, persecuted, and possibly tortured,” Maalouf said.

In 2020, Saudi Arabia and 45 other countries signed a letter in support of China’s mass detention camps in Xinjiang, marking a “turning point” for Saudi foreign policy, according to Bradley Jardine, fellow at the Kissinger Institute for U.S.-China Relations.

At least five other governments in the Arab world — Egypt, Morocco, Qatar, Syria and the United Arab Emirates — have detained, extradited, or participated in cross-border repression of Uyghurs at China’s request.

And the problem isn’t confined to the Middle East.

“It is very difficult for Uyghur advocates to travel to Central Asia now,” Omer Kanat, chairman of the executive committee of the World Uyghur Congress told RFA after being sent back to Turkey from Kazakhstan. “I was stopped by border officials while visiting Kazakhstan. I was interrogated by Kazakh security officers at the airport, who asked me why I came to Central Asia.”

“They told me that no member of the Shanghai Cooperation Organization is going to let me in, then they sent me back to Turkey,” Omer Kanat said.

According to statistics from the Uyghur Human Rights Project and the Oxus Society for Central Asian Affairs, the Chinese government has detained, deported or extradited more than 1,300 Uyghurs since China’s “war on terrorism” began in 2014, most of the them from Muslim-majority countries.

Between the launch of the SkyNet program in 2014 and June 2021, China repatriated nearly 10,000 people from 120 countries and regions, the report said. Yet according to Safeguard Defenders, just one percent are brought back to China using judicial procedures; more than 60 percent are just put on a plane against their will.

“The diversity of the CCP’s so-called ‘extradition’ is something that worries us,” Chen Yanting of Safeguard Defenders told RFA. “For example, the Interpol red notice mechanism is increasingly being abused to persuade other countries to cooperate.”

“Another example is [legal] extradition on the surface, but with China will using illegal methods behind the scenes alongside the formal extradition process.”

Many people are forced to go back when the authorities threaten to detain their loved ones.

“This kind of situation is very common, and many Uyghurs in the United States and Europe have received similar [Chinese police harassment] calls,” Omar Kanat said, citing the case of a friend who received a message from her relatives asking her to turn herself in at the Chinese embassy and tell them she loves China.

SkyNet operates under the Supervision Law of the People’s Republic of China, using it to legitimize what are effectively overseas renditions and kidnappings.

Another Chinese national, Wang Jianye, was executed after being extradited from Thailand in 1995 despite assurances that he wouldn’t face the death penalty.

“First, China’s diplomatic assurances are not credible, and second, the human rights of the extradited person cannot be guaranteed, and there is a high chance that they will be persecuted,” Chen Yanting said.

Sophie Richardson, China director at Human Rights Watch (HRW), agreed, saying any country that believes diplomatic assurances from China is either naïve or negligent, warning countries with current extradition requests from China not to ignore reality.