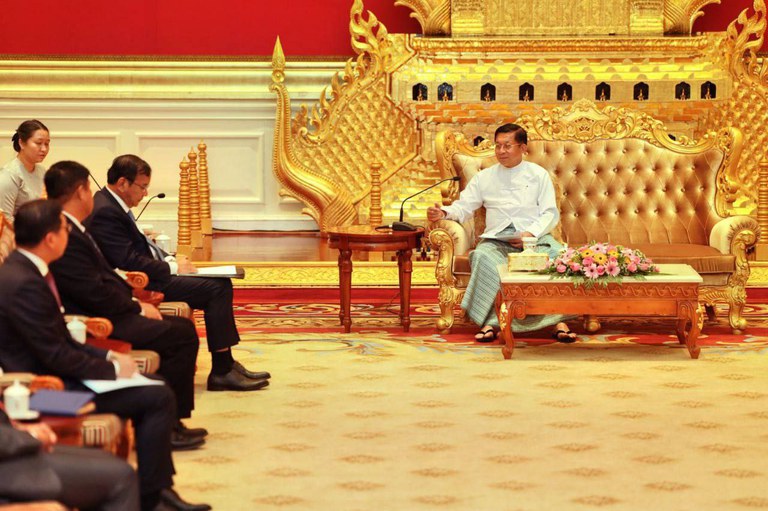 Chinese Foreign Minister Wang Yi has called on Myanmar’s military regime to work with the opposition to resolve the country’s political crisis, days after an ASEAN envoy concluded a visit there without meeting any anti-junta stakeholders.

According to a statement posted on the Chinese Foreign Ministry’s official website on Monday, Wang told the junta that Beijing wants to see “reconciliation” in Myanmar and that “all those involved in politics should hold a dialogue for the sake of the people.”

Wang was in Mandalay region’s Bagan city on Sunday to attend the 7th Lancang-Mekong Cooperation Summit, co-chaired by China and Myanmar. China’s Foreign Ministry said Wang met with junta Foreign Minister Wunna Maung Lwin on Monday to discuss reconciliation in Myanmar and informed him that his country can only move forward when political and social stability are achieved.

Myanmar-based political analyst Sai Kyi Zin Soe told RFA Burmese that the military regime is seeking legitimacy on the global stage with the help of China after drawing condemnation from its fellow member nations in ASEAN over its Feb. 1, 2021, coup and an ensuing crackdown that has caused the deaths of at least 2,065 civilians, according to Thailand’s Assistance Association for Political Prisoners.

“They are aiming for international acceptance of what they are doing at home,” he said.

But Sai Kyi Zin Soe said the junta cannot expect its status within ASEAN to change overnight, even with the help of China, and expects a power struggle will continue with the bloc.

China’s Foreign Ministry has said it “supports the international community’s efforts to protect Myanmar’s interests and reputation,” according to a report by the state-run Xinhua news agency.

A spokesman for the Pro-democracy Strike Committee (Dawei), an anti-junta group, told RFA that the junta is seeking Chinese help because of declining international support.

“The junta has no international support at all … and so they must rely on China,” said the spokesman, speaking on condition of anonymity. “As China is a world power, the regime is relying on it to obtain international recognition.”

Kyaw Zaw, a spokesman for the office of the president for Myanmar’s shadow National Unity Government (NUG), told RFA that Wang attended the Lancang-Mekong meeting in an attempt to “legitimize the junta,” and warned that doing so would be harmful to the country’s economy and development.

“It would be detrimental to regional security, as it would lead to more instability in the area and there will be even more violence in Myanmar,” he said. “The situation would become an obstacle for economic development. The military’s actions are based on violence, and violence does not bring stability.”

Kyaw Zaw said the NUG’s goals are aimed at achieving economic growth for the country and that the shadow government is committed to protecting genuine businesses, while the military is turning economic projects into “battlefields.”

Since the coup, Myanmar’s armed opposition has targeted Chinese investment and development in the country, particularly projects that could earn the junta income it says is used to oppress the people.

At least 77 clashes took place in the 42 townships where the China-Myanmar Economic Corridor project was to be implemented between July 2021 and April 2022, according to research group Institute for Strategy and Policy Myanmar.

Political analyst Ye Tun said China is concerned about its investments in Myanmar as the conflict is unlikely to end any time soon.

“Because of that, they are also concerned about their future investments in Myanmar and their security,” he said.

“That’s why they are pushing for the implementation of the ASEAN agreement,” he added, referring to a Five-Point Consensus agreed to by Min Aung Hlaing at an emergency ASEAN meeting on the crisis in April 2021.

Points agreed to during last year’s emergency ASEAN meeting included an immediate end to violence in the country, the distribution of humanitarian aid, dialogue among all parties, and the appointment of an ASEAN special envoy to Myanmar who would be permitted to meet with all stakeholders. The junta has yet to implement any of the points in the 14 months since the meeting, while continuing its violent crackdown on opponents.

China has become the largest source of foreign investment in Myanmar since the withdrawal of Western businesses following the military coup. However, trade between the two countries dwindled to U.S. $4.3 billion in the 2021-2022 budget year, down from more than U.S. $5 billion a year earlier, according to figures from the junta’s Ministry of Commerce.

He also met with seven ethnic armed groups — all signatories of a Nationwide Ceasefire Agreement with the government since 2015 — and seven political parties that won seats in Parliament in the country’s November 2020 election.

A July 2 statement by the Ministry of Foreign Affairs for Cambodia, which hosts the rotating chair of ASEAN, said Sokhonn met with Min Aung Hlaing and Wunna Maung Lwin to find a way to work with the U.N.’s representative for Myanmar, stop the violence, release political prisoners, speak with civilians — including Suu Kyi — and access areas where humanitarian assistance is difficult to reach. The statement said he discussed how the U.N. and international NGOs should be involved in humanitarian assistance with the junta’s minister for International Cooperation, Ko Ko Hlaing.

However, the envoy did not meet with any armed ethnic groups that are opposed to the junta’s coup, nor the National League for Democracy (NLD), which won Myanmar’s 2020 election in a landslide victory before being deposed in last year’s putsch.

Kyaw Htwe, a member of the NLD’s Central Working Committee, said Sokhonn’s failure to meet the opposition or other anti-junta stakeholders during his second visit to Myanmar as ASEAN envoy would only serve to legitimize military rule.

“It was a meaningless, sham effort by the junta which showcased it as a sign of goodwill towards Myanmar’s democracy, but the special envoy was only allowed to meet with those who support the military,” he told RFA.

“In fact, history has shown that talks excluding all ethnic groups and [detained NLD leader] Daw Aung San Suu Kyi, who is the legal winner of the 2020 elections and who still has the support of the people, have proved futile.”

Rakhine National Party Chairman Thar Tun Hla, who met with Sokhonn, called the special envoy’s visit “unsuccessful,” as it only focused on implementing one facet of the Five-Point Consensus.

“He only informed us that we will be able to do humanitarian work,” he said. “There are five points to the ASEAN consensus. Of the five, he has fulfilled only one and so the likelihood of the trip being a success is low.”

Thar Tun Hla said that while no other agreements were reached, Sokhonn had revealed that ASEAN allotted U.S. $1.5 billion in humanitarian aid for Myanmar.

A spokesman for the Karen Social Welfare Group in Kayin state said that Sokhonn’s visit wouldn’t benefit refugees on the ground because he had only discussed humanitarian issues with the military.

“The military is the one causing trouble for our people — everyone can see this,” he said. “[He] only met directly with the military regime [and those they approved], and not the people, so we don’t think it will be beneficial for the refugees.”

During his first visit in March, Sokhonn met with only a few people chosen by the junta. While he held more meetings this visit, political analysts said his failure to meet with key figures, such as Suu Kyi, will not be of much use.