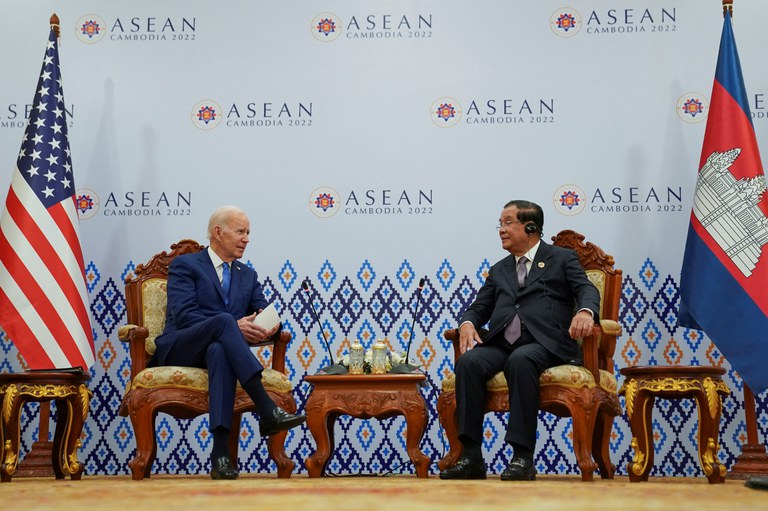 U.S. President Joe Biden offered rare praise for Cambodia’s authoritarian premier as he encouraged diplomatic support for ending the war in Ukraine and bringing peace to Myanmar at a summit with Southeast Asian leaders on Saturday.

Although the control of U.S. Congress lies in the balance back in Washington, Biden signaled commitment to the region by attending an annual gathering of leaders of the Association of Southeast Asian Nations.

His appearance in Phnom Penh, a day after attending a climate change conference in Egypt, serves as a prelude to the first face-to-face meeting of his presidency with Chinese leader Xi Jinping, which will take place in Bali, Indonesia, on Monday. The U.S. and China vie for influence in Southeast Asia.

Although Cambodia has faced some stiff criticism from the U.S. over its suppression of democracy, Prime Minister Hun Sen welcomed the president saying the meeting showed the Biden administration’s commitment to “ASEAN centrality and a rule-based regional architecture to maintain peace and stability in the region.”

“We support the engagement of the U.S in our ASEAN community building process as truly important, especially in the context of bolstering ASEAN’s recovery from the COVID-19 crisis, promoting regional resilience as well as addressing many pressing issues such as climate change, food and energy security,” he said, adding that ASEAN planned to extend relations with the U.S. to a comprehensive strategic partnership. That will put the U.S. on level-pegging with China, which already has that status.

Cambodia is hosting the summit as it holds the rotating chairmanship of the 10-nation ASEAN bloc. Indonesia takes the chair after this week’s summits.

Biden stressed the importance of the partnership, saying the U.S administration would build on the past year’s U.S. $250 million in new initiatives with ASEAN by requesting a further $850 million for the next 12 months. He said it would pay for more Southeast Asian projects such as an integrated electric vehicle ecosystem and clean energy infrastructure to reduce carbon emissions.

“Together we will tackle the biggest issues of our time from climate to health security, defend against significant threats to rule-based order, and to threats to the rule of law, and to build an Indo-Pacific that’s free and open, stable and prosperous, resilient and secure,” Biden said.

The linchpin of the U.S. push in Southeast Asia is the Indo-Pacific Economic Partnership (IPEF) that is intended to intensify America’s economic engagement in the region. ASEAN is America’s fourth-largest trading partner.

Whether the members of ASEAN will be impressed by what the U.S. has to offer is another matter.

“I don’t think ASEAN states are much sold on IPEF. It contains parts that are anathema to them and yet isn’t really a trade deal, and does little to actually further regional economic integration. It’s a fairly weak package overall,” said Joshua Kurlantzick, senior fellow for Southeast Asia at the Council on Foreign Relations.

“China is already by far the region’s dominant economy and trade partner and the U.S. isn’t going to materially change that. Southeast Asian states are stuck with China as their dominant economic partner.

“For some Southeast Asian states [there is] a desire to build closer strategic ties with the U.S, but the U.S. is not going to now replace China as the region’s dominant trade partner.”

In a comment that would have raised some eyebrows among critics of the Cambodian government’s human rights record, Biden on Saturday thanked Hun Sen – for critical remarks about the war in Ukraine and for co-sponsoring U.N resolutions.

However, Biden did call for transparency over Chinese military activities at Ream Naval base on Cambodia’s southern coast, and urged Hun Sen “to reopen civic and political space ahead of 2023 elections,” and release Theary Seng, an imprisoned U.S.-Cambodian lawyer and activist.

The other conflict that Biden mentioned in his public comments to ASEAN leaders was Myanmar, whose military leader was not invited to the summit. Biden said he looked forward to the return of democracy there.

Human rights groups have assailed the Southeast Asian bloc for its failure to put more pressure on Myanmar to end the civil war that followed a February 2021 military coup against an elected government.

On Friday, ASEAN leaders took a marginally tougher stand, calling for measurable progress toward the goals of its Five Point Consensus that include restoring democracy and delivering humanitarian aid.

On Saturday Antonio Guterres voiced his support for the plan, saying “the systematic violation of human rights are absolutely unacceptable and causing enormous suffering to the Myanmarese people.”

Cambodia, which has jailed opposition politicians and environmentalists, was not spared criticism by the U.N. secretary general.

“My appeal in a country like Cambodia is for the public space to be open and for human rights defenders and climate activists to be protected,” he said.

Biden attends the East Asia Summit on Sunday, also hosted by Cambodia, where he plans once again to discuss ways to end the Russian invasion of Ukraine and limit the global impact of the war in terms of fuel and grain shortages that are fueling global inflation.

The U.S. president is also holding talks with Japanese Prime Minister Fumio Kishida and South Korean President Yoon Suk-yeol expected to focus on North Korea’s recent barrage of missiles fired into the seas off the Korean peninsula — including one that passed over Japan. North Korea is also reported to be planning a nuclear test.

Biden then heads to the Indonesian island of Bali to attend the Group of 20 leaders’ summit.

Ahead of the G20, on Monday Biden will meet with China’s leader Xi. It will be their first face-to-face talks since Biden took office nearly two years ago.

Biden will tell Xi that if North Korea continues on its current path, it will lead to an enhanced U.S. military presence in the region, National Security Advisor Jake Sullivan told reporters on their way to Cambodia.

The meeting between the two leaders comes as Xi begins a third term in office after consolidating his domination of the ruling Chinese Communist Party at a National Congress despite mounting domestic problems inside China.

For his part, Biden is entering this Asian summit season after his Democrat party’s slim grip on the U.S. Congress slipped after midterm elections.

Analysts say the meeting with Xi is likely to focus on keeping open lines of communication and finding areas to cooperate, as well addressing contentious issues such as both countries’ war games in the region, Taiwan and North Korea.

This story has been updated to correct the name of Theary Seng and clarify Biden’s concerns about Ream Naval Base.