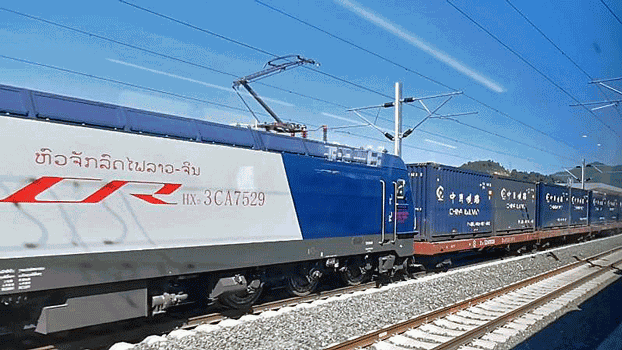 Costly and time-consuming customs-clearing procedures put in place as part of China’s zero-COVID-19 restrictions are making it difficult for Lao traders to export products via the new Laos-China Railway, Lao officials and people involved in cross-border trade said.

Lao authorities have been negotiating with their Chinese counterparts and officials with the rail company for months in an effort to send more Lao goods by train to China, but to little avail, said a Lao transportation official, who declined to be named so he could speak freely to the media.

The U.S. $6 billion high-speed railway has been in operation for four months. Chinese goods and produce are shipped to Laos daily, while Lao goods are rarely transported to China, and fresh produce is not carried at all.

The Chinese government’s ongoing enforcement of its zero-COVID policy for containing the highly contagious virus through intensive testing and tracing and lockdowns has meant that all imported goods must be fully checked and limits on the kinds of fruits and vegetables that are allowed in, the Lao official said.

“The Chinese government does not allow sending fresh products and is still enforcing zero-COVID-19 procedures,” he said.

Another complicating factor is that the train is not ready to carry fresh agricultural products, though it is transporting Chinese machinery, electrical equipment and housewares from China to Laos, the official told RFA on Monday.

“Most Lao produce, including bananas and watermelons, haven’t been transported by train to China yet because these agricultural products are perishable, and the train containers are too hot for them,” the official said.

Only some dried agricultural products from Laos, such as rubber, cassava and soil from Laos, can be exported by land to China via the railway, he said.

A manager of the Vientiane office of a Chinese company that offers shipping services to businesses via the new railway told RFA that the COVID restrictions in China take too much money and time to process for most shippers.

“They are very strict about the shipping of fresh products, fruit and produce,” he said. “The import and export of goods and tax document declaration is pretty hard as strict measures to cope COVID-19 are still imposed.”

RFA could not reach the Chinese Embassy in Vientiane for comment. But state-run China Radio International reported on April 12 that China continued to enforce the zero-COVID policy to prevent all means of the virus from entering the country, including through the import of produce.

A businesswoman in southern Laos who exports white charcoal to China, South Korea and Japan said she’d like to use the railway but the Chinese have made the process too difficult.

As of now, she sends goods to her customers in other countries via ships that leave from a Vietnamese port.

A truck driver in northern Laos, who provides shipping services to China, said it was still more convenient and faster to ship produce to China via truck, even though that process has also slowed.

“Sending fruits via Laos-China railway is not easy or fast,” he said. “The process takes very long, and the fruits can go rotten if it is not sent to China on time.”

It used to take truck drivers two to three days to reach China by road, but COVID-19 protocols at the border have led to huge traffic jams and added as much as three days to the journey, he said.

“When we reach Laos-China border, there will be trucks from China to take fruits or produce from our trucks … because we cannot drive to the cities in China,” the driver said.

“These days, it is very hard to drive to China, and the COVID-19 control is very strict, and I do not understand why,” he said. “There will be officials in white plastic suits who will drive the trucks of fruit and produce from us into mainland China.”

Phithoun Sri-inngarm, director of Nongkhai province’s customs office, told RFA that the Laos-China Railway transports goods from China to Laos and Thailand, but not vice versa.

“In the past four months, transporting goods from Thailand to China through Laos is still very little when compared to goods shipped from China to Thailand through Laos,” he said. “The main reason is the difficult process on the Chinese side.”

On March 27, the first shipment of Thai fruit — 40 tons of durians in two containers and 20 tons of coconuts in one container — was transported from Rayong province, Thailand, via the Laos-China Railway to Chongqing municipality, according to a Thai media report that cited Somkiat Mansiripibul, the manager of Kaocharoen Train Transport Co., Ltd.

In January, the first shipment of 1,000 tonnes of Thai rice was delivered to China via the Laos-China railway, Thai media reported.

As of March 3, the Laos-China Railway had carried more than 1.7 million passengers — 1.6 million of whom travelled on the section of railway in China — and 1.1 million tons of goods, according to the Lao News Agency.

Officials have expected the railway to cut the cost of transport through Laos by 30%-40% compared to travel by road, giving a boost to trade and investment in the impoverished, landlocked country.

The railway has operated 350 international train journeys carrying over 250,000 tons of freight since the start of 2022, Lao News Agency reported.