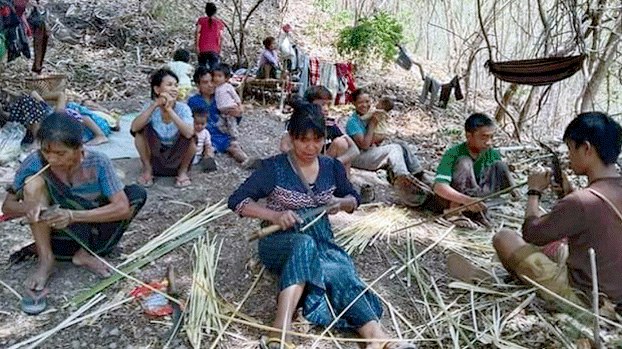 Myanmar’s junta has yet to deliver humanitarian assistance pledged three months ago by the Association of Southeast Asian Nations (ASEAN) for the country’s more than 1.2 million refugees of conflict, who aid workers say are in dire need of food and medicine.

At a May 6 meeting in Cambodia’s capital Phnom Penh, the ASEAN Coordinating Center for Humanitarian Assistance (AHA) agreed to deliver aid to Myanmar under the supervision of the military regime, which would distribute it to those in need.

However, aid workers in northwest Myanmar’s Sagaing region told RFA Burmese that as of Monday none of the promised aid had been delivered there or other regions with refugees in need, including Chin, Kayah and Kayin states.

“ASEAN’s help hasn’t made it to Sagaing yet,” said Thet Oo, who is assisting victims of conflict with the People-to-People Program in the region’s Yinmarbin and Salingyi townships.

“It’s been three months since their meeting, but nothing has come to Yinmarbin district at all.”

Thet Oo warned ASEAN not to trust the junta’s promises.

“The junta, which is terrorizing us, will never provide the aid or assistance they agreed to with ASEAN,” he said.

The United Nations Office for the Coordination of Humanitarian Affairs announced on Aug. 3 that 866,000 people had joined the ranks of Myanmar’s refugees since the military’s Feb. 1, 2021 coup, bringing the total number to more than 1.2 million, or more than 2% of the country’s population of 54.4 million.

Of the new refugees, some 470,000 were forced to flee their homes in Sagaing, where clashes between junta troops and the armed opposition are among the deadliest and most frequent in the nation.

Thet Oo said his organization is struggling to provide assistance with only donations to rely on.

Meanwhile, the military is carrying out a scorched earth offensive in the region, conducting raids on villages and setting them on fire, and creating new refugees each day, he said.

“The need for food and medicine is still very great. There isn’t enough food in the mountains. No NGOs have yet come here,” a spokesman for the Mindat Township Refugee Camps Management Committee said, speaking on condition of anonymity.

“Since the beginning, when we heard ASEAN would be providing assistance through the junta, we have been skeptical. It was clear that Chin state would not be included in the distribution program. Sure enough, no aid has reached the refugees in Mindat township to date.”

ASEAN’s decision to deliver assistance to Myanmar’s refugees through the junta was slammed by the country’s shadow National Unity Government (NUG), as well as the Karen National Union (KNU), Karenni National Progressive Party and Chin National Front ethnic parties as “unacceptable” in a joint statement on May 30.

The groups, which the junta says are terrorist organizations, were not extended an invitation by ASEAN to the May 6 meeting in Phnom Penh at the request of the military regime, nor was the U.N. secretary general’s special representative to Myanmar, Nolin Heza.

Win Myat Aye, NUG minister for Humanitarian Affairs and Disaster Management, told RFA this week that ASEAN’s plan to provide aid through the junta will not do anything for the people who are suffering the most in Myanmar.

“What ASEAN is doing …  is impractical. It hasn’t been successful because it never reached those who really need it for more than three months now,” he said.

“NUG is now already working to meet the actual needs on the ground. We are working in cooperation with international organizations, so the information we act on will be true and we can provide the necessary help. … In order to be successful, we need to help with real action, not just words.”

Win Myat Aye noted that the NUG disaster ministry had been providing shelter and medicine to refugees for the last 18 months since the coup.

Aid workers helping refugees in Chin, Kayah and Kayin states, as well as some townships in Sagaing and Magway regions, told RFA that even if the junta is working to deliver assistance from ASEAN, it only controls Myanmar’s cities and its administration is broken in rural areas.

KNU spokesman Pado Saw Tawney said that the junta is incapable of reaching all of the country’s refugees on its own.

“There are over a million [refugees] according to available statistics. But in fact, what we believe is that there may be 2 million or more,” he said.

“This situation has become a problem that cannot be solved internally. It requires cooperation with the international community. … That’s the bottom line. Nothing will happen if it is carried out by the junta alone.”

The U.N. humanitarian affairs office said in its statement on Aug. 3 that the security and humanitarian aid situations in Myanmar have worsened significantly as fighting continues throughout the country. The agency said efforts to deliver assistance to refugees have been hamstrung by military restrictions on the transportation of essential goods, including food and medical supplies.

Reports of the worsening refugee situation in Myanmar came as the country’s opposition groups and analysts called on ASEAN to adopt stronger measures in its dealing with the junta following the bloc’s 55th Foreign Ministers’ Meeting in Phnom Penh from July 31 to Aug. 6.

During the gathering, most ASEAN member states criticized the junta for failing to implement the bloc’s agreements and for its July 25 execution of four democracy activists, including former student leader Ko Jimmy and a former lawmaker from Myanmar’s deposed National League for Democracy party.

However, the wording of a statement issued at the end of the meeting was toned down due to the objection of the Myanmar delegation. The decision regarding Myanmar will be taken at the annual ASEAN Summit in November after studying and evaluating the extent to which the bloc’s 2021 Consensus is implemented by the junta.

Kyaw Zaw, spokesman for the NUG presidential office, said it is no longer enough for ASEAN to simply make criticisms. Instead, he said, the bloc should undertake “practical measures,” noting that there is no resolution in sight for Myanmar’s political crisis more than 18 months after the takeover.

“The 5-Point Consensus (5PC) has been disregarded and is still being ignored and it has been almost a year and a half since the coup,” he said, referring to an agreement between the junta and ASEAN to end violence in Myanmar during an emergency meeting held by the bloc in April 2021.

“We’re thankful that they expressed their concern and they said they condemn the Myanmar issue. But I’d like to reiterate that now is the time to talk less and take action more.”

Kyaw Zaw said he welcomed the ASEAN foreign ministers’ decisions not to allow high-ranking representatives of the junta to attend the bloc’s ministerial-level meetings in the future, set a precise time frame for the implementation of the ASEAN Consensus, and to hold formal discussions with the NUG.

Under the 5PC, the junta agreed to end to violence in the country, facilitate constructive dialogue among all parties, and allow the mediation of such talks by a special ASEAN envoy. The 5PC also calls for the provision of ASEAN-coordinated humanitarian assistance and a visit to Myanmar by an ASEAN delegation to meet with all parties.

Even regime leader Snr. Gen. Min Aung Hlaing acknowledged that the junta had failed to hold up its end of the bargain on the consensus in a televised speech earlier this month in which he announced that the junta was extending by six months the state of emergency it declared following last year’s coup. He blamed the coronavirus pandemic and “political instability” for the failure and said he will implement “what we can” from the 5PC this year, provided it does not “jeopardize the country’s sovereignty.”

The junta’s failure to abide by the 5PC drew criticism last week from U.S. Secretary of State Antony Blinken, who told Voice of America’s Khmer service that if the agreement is not met, ASEAN should adopt new measures, including suspending Myanmar’s membership in the bloc.

The junta’s Ministry of Foreign Affairs said in a statement that inviting a lower-level delegate from Myanmar to the ASEAN Foreign Ministers’ Meeting and related meetings was a violation of the bloc’s charter.

Thein Tun Oo, executive director of the pro-military Thayninga Strategic Studies Institute, warned that ASEAN would become weaker if Myanmar were to be suspended.

“Currently, it’s not easy to suspend Myanmar straight away. But even if they were to make such a decision, Myanmar’s special interests would not be affected,” he said.

“We think ASEAN would become weakened and break up because of the [suspension.]”

Sai Kyi Zin Soe, a political analyst, said removing Myanmar from the bloc would only lower the pressure on the junta.

“ASEAN doesn’t have much leverage now. Expelling Myanmar would be the worst case scenario. It is within the bounds of what they can do, but I don’t think they will go that far,” he said.

“If they cut Myanmar off like that, it will be more difficult to engage … so, it’s unlikely.”

ASEAN Special Envoy for Myanmar Prak Sokhonn is scheduled to make his third official visit to the country in September.

During his last visit in July, the envoy did not meet with any armed ethnic groups that are opposed to the junta’s coup, nor the NLD, which won Myanmar’s 2020 election in a landslide victory before being deposed in last year’s putsch.

Observers said Sokhonn’s failure to meet the opposition or other anti-junta stakeholders during his visit would only serve to legitimize military rule.