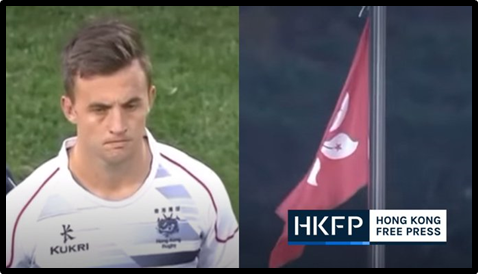 Was it intentional or a simple mistake?

In a scene that went viral on social media in Hong Kong, the unofficial anthem of Hong Kong’s 2019 pro-democracy protests was blared over the sound system before a rugby match between Hong Kong and South Korea played just outside of Seoul on Sunday.

The song, “Glory to Hong Kong,” which calls for democracy and liberty, rose to prominence during the widespread protests in Hong Kong in 2019 against increasing encroachment on civil liberties by mainland Chinese authorities.

The song is highly symbolic to the people of Hong Kong, who have pushed back against the growing constraints on expressions of free speech and press imposed on them by the Hong Kong government, which is largely doing Beijing’s will.

“The song pokes right at the sore spot of the Hong Kong government. It reminded the government of the fact that it does not truly govern Hong Kong,” said former legislative council member Ted Hui, who is in exile overseas.

“The Hong Kong government is aware that it is a weak and unpopular government,” Hui said. “It fears that the pro-democracy movement will be revived, and that the momentum may grow stronger again.”

This is the clip when “Glory to Hong Kong,” the protest anthem, was played at the Asian Rugby Seven Series in South Korea: https://t.co/o02abNBQ5y pic.twitter.com/kB8lr5i6CV

The Seoul-based Korea Rugby Union said that the gaffe was a result of human error and had no political motivations, and that it had apologized to the Asia Rugby Union, and both the Hong Kong and Chinese teams participating in the tournament.

But Ronny Tong, a member of Hong Kong’s Executive Council, said the incident was likely not human error and must have had Hong Kong-based accomplices.

Tong said that those responsible may have violated several laws, including by committing sedition under the Crimes Ordinance, separatism or collusion with foreign forces under the National Security Law of Hong Kong, or conspiracy to contravene under the National Anthem Ordinance.

Tong said that the Hong Kong government should conduct a thorough investigation in accordance with the law, rather than simply protesting and demanding an apology.

Tong had no proof of his assertion, Sang said. “[He] claimed that it was an individual in Hong Kong who plotted to have someone meddle with the Chinese national anthem. This is pure imagination. Why not consider other possibilities?”

Similar anthem gaffes have occurred on many occasions over the years. In 2017 Russian gold medal winners at the biathlon world championship in Austria saw their flag raised to the tune of the Yeltsin-era Russian anthem.

After a Kazakh athlete won a gold medal at an international shooting competition in Kuwait in 2012, the organizers played a fake version of the Kazakstan anthem made for the comedy movie Borat.