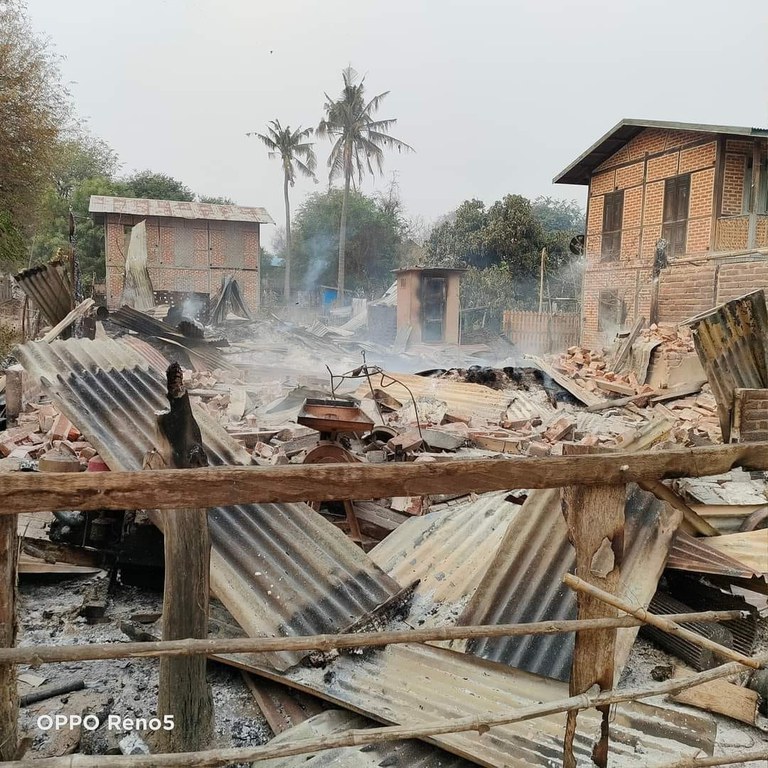 One out of every 100 citizens of Myanmar became displaced by conflict in the nearly 15 months since the junta seized power, according to the United Nations, pushing the total number of internal refugees to a staggering 912,700 and pushing the country ever closer to the brink of a humanitarian crisis.

In a statement on Tuesday, the United Nations Office for the Coordination of Humanitarian Affairs said that 566,100 people — or more than 1% of Myanmar’s population of around 55 million — were made refugees since the Feb 1, 2021, coup, adding to some 346,000 people already identified as internally displaced persons (IDPs) prior to the takeover.

The agency said that for the first time, displacement in the northwest, where the military is carrying out a scorched earth campaign in Chin state and the regions of Sagaing and Magway, exceeded 300,000 people. Eastern Myanmar, which includes the embattled states of Shan, Kayah, and Kayin, also saw substantial displacement since the coup.

Junta troops killed at least 1,600 people, including some 100 children, since the coup, the U.N. office said. Many of the victims died in military airstrikes, artillery strikes or as the result of triggering landmines.

“Hundreds of thousands of men, women, boys and girls have fled their homes for safety since the February military takeover, many of them forced to move multiple times exposing people to grave protection risks,” the statement said.

The U.N. said in mid-January that the number of people displaced in Myanmar since the coup totaled 320,000, suggesting an increase of nearly 600,000 in the past three months alone.

The displacement has placed a tremendous strain on resources and IDPs are in desperate need of assistance.

“To meet their obligations to people in need, humanitarian actors, including the U.N., international and national NGOs, need quicker, simpler and more predictable access processes.”

Among the needs of IDPs identified by the agency were funding for educational activities, food security, health care, nutritional supplements, protection from violence, shelter, water, sanitation and hygiene.

Speaking to RFA’s Myanmar Service on Wednesday, a refugee in Sagaing’s Yinmabin township said that obtaining things like rice, cooking oil and salt must be done in the city but are subject to seizure by junta troops at checkpoints.

“Many people are facing starvation. Our homes have been burned down. The fire has also destroyed our storage and all our supplies for the entire year. We are sharing what is left among the villagers,” he said, speaking on condition of anonymity citing fear of reprisal.

“We went to Monywa to purchase some bags of rice, but [the soldiers] seized them on the way home. We are not allowed to transport large bags of rice or other food supplies.”

He said those displaced are forced to scrape by trading their remaining rice supplies with nearby villages.

In Kayah state, food transport routes have been cut off by fighting between the military and anti-junta People’s Defense Force paramilitaries, forcing people to ration what they have left.

An IDP from Kayah’s Demoso township, which has been the center of intense clashes in recent weeks, told RFA that his group of refugees is at risk of running out of food.

“We cannot find more foods. The roads are closed, so we must ration what we have,” said the IDP, who also declined to be named.

“We can use cooking oil only once or twice a month. We prepare foods without cooking, often by grinding it into a powder. We skip some meals. We have only one meal instead of two meals a day. We adults try to adapt and give priority to the children.”

“It has become more difficult to transport food. We can’t carry as much as we need. For example, we order 100 rice bags, but we are allowed to transport only 50 — the authorities are controlling things very strictly,” he said.

“I think we need to save up more food for the future because we expect things will become even more difficult. Whenever there is fighting, we face shortages.”

In Chin state, a volunteer told RFA his group can’t transfer food because of fighting near the roads. Additionally, he said, troops require permits to transport food and other commodities along closed routes, leading to price hikes in local markets.

“This action shows that they lack humanitarian spirit. The military is trying to weaken the local resistance by cutting of food supplies, but they are impacting local civilians,” he said.

“They intentionally create food shortages and force people to abandon their homes. These are horrible human rights violations.”