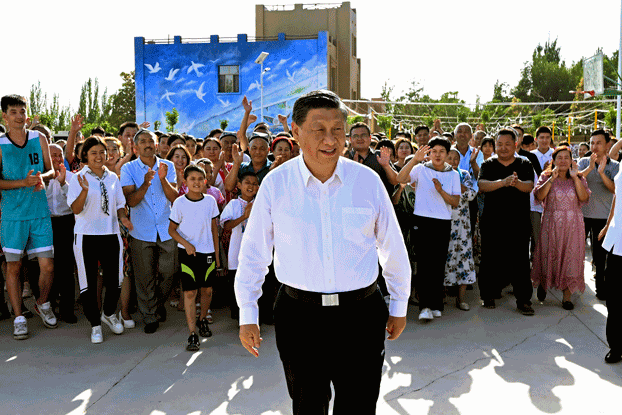 Chinese President Xi Jinping’s recent visit to Xinjiang signals a new emphasis on the assimilation of the Uyghurs, a predominantly Muslim ethnic minority group the U.S. and other governments have said are victims of an ongoing genocide, analysts said.

Xi made an unannounced visit to China’s far-western Xinjiang Uyghur Autonomous Region (XUAR) on July 12-15, where he emphasized “social stability and lasting security as the overarching goal” of Chinese Communist Party (CCP) policies, according to a July 15 report by the official Xinhua News Agency.

Xi’s visit to Xinjiang was his second in eight years to the region, where Chinese authorities have detained up to 1.8 million Uyghurs and other Turkic minorities in internment camps since 2017.

Locals have reportedly been subjected to severe human rights abuses, torture and forced labor, as well as the eradication of their linguistic, cultural and religious traditions in what the United States and several Western parliaments have called genocide and crimes against humanity.

Adrian Zenz, a researcher at the Washington, D.C.-based Victims of Communism Memorial Foundation and expert on the Xinjiang region, said Xi’s statements were “a very significant affirmation that Beijing’s policy was correct and that it should continue to be implemented.

“It’s a statement of defiance and of pride,” Zenz told RFA. “Basically he is signaling that nobody can interfere into China’s ethnic policy in Xinjiang and that Beijing’s red lines are firmly upheld.”

On Tuesday, Reuters reported that China has asked United Nations High Commissioner for Human Rights Michelle Bachelet to bury a report into Xinjiang, which she visited in May.

The letter authored by China expressed “grave concern” about the Xinjiang report and aims to halt its release, Reuters said from Geneva, where four sources told the news agency that China began circulating it among diplomatic missions from late June and asked countries to sign it to show their support.

Xi ‘will eradicate the remaining few’

In a July 16 tweet thread, James Millward, a history professor at Georgetown University who specializes in Central Asia, noted Xi’s contention that “Chinese civilization is the root of the cultures of all ethnic groups in Xinjiang” in a speech after his trip to describe the relationship of non-Han Chinese people in the XUAR to zhonghua, or Chinese identity.

“In Xi’s speech at the Third Xinjiang Forum in September 2020 (and in other speeches around that time) a different phrase was used,” Millward wrote. That phrase was: “All ethnic groups in Xinjiang are family members linked to Chinese bloodlines.”

“I pointed out at the time that by evoking ‘blood’ and ‘family member’ this phrase indirectly implied a genetic relationship between the Central Asian peoples now ruled by the [Chinese Communist Party] and ‘zhonghua,’ i.e., Chinese people,” he wrote.

Millward also notes that Xi’s comment about the necessity of educating and guiding officials and the masses “to correctly recognize Xinjiang history, especially history of ethnic development” indicates that China is now stressing that various ethnic groups “are all Chinese, developed from and as part of what Xi calls the ‘zhonghua’ (now ubiquitous as generic, ahistorical cultural term equivalent to the western-language term ‘China’).”

Chinese analyst Ma Ju said Xi went to Xinjiang in preparation for the CCP’s 20th Congress in autumn, where Xi likely will be reappointed for a third term as party general secretary, and the People’s Congress convening next March.

“Xi Jinping’s statements made after his visit to the region indicates that he will eradicate the remaining few and careful cultural figures after getting rid of the Uyghur elites,” Ma told RFA. “This is an eradication campaign. They will continue this eradication campaign just like getting rid of the civilization of other nations [non-Han peoples] in Chinese history.”

Rahima Mahmut, U.K. director of the World Uyghur Congress, said events such as the staged dancing of Uyghurs for Xi’s visit was orchestrated for propaganda purposes.

“This happens quite often,” she said. “It is the same not only for officials from the central government, but also for local officials. The Uyghur students and performers are forced to welcome such officials. The staged dancing of Uyghurs was meant to show the world that Uyghurs enjoy normal happy lives.”

But Mahmut also said it was “frightening” to see photos and videos of the Chinese president with mostly elderly Uyghurs around him, and young men nowhere to be seen.

“Where did the Uyghur young men go? The truth is most young Uyghur males have faced enforced disappearance. They are either in the camps or prisons. This is quite clear,” she said.

Following Xi’s visit to the XUAR, a U.S. State Department spokesperson told RFA that the U.S. would continue to work “to promote accountability for the PRC [People’s Republic of China] government’s use of forced labor, as well as its ongoing genocide and crimes against humanity against Uyghurs and members of other ethnic and religious minority groups in Xinjiang.”