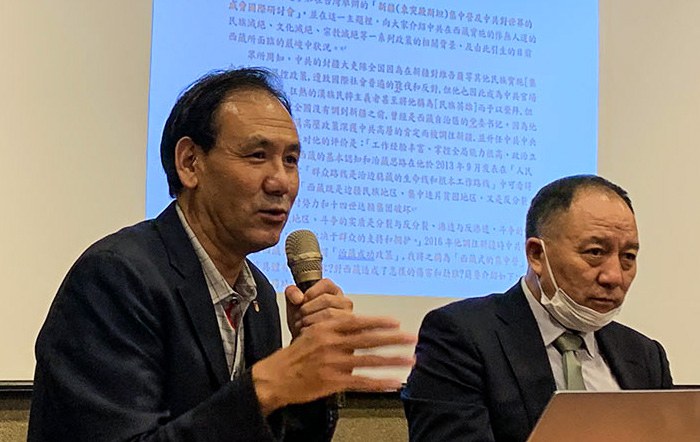 Xi’s regime, which is already engaged in a program of mass incarceration of Uyghurs and mass surveillance and police controls in Xinjiang and Tibet, will continue to pose a grave threat to minority groups, exiled Uyghur rights activist and businesswoman Rebiya Kadeer told a recent forum in Taiwan.

If the international community doesn’t try to resolve the issue of Uyghurs, Tibetan and other ethnic minority groups, “Chinese atrocities” could have a global impact, Kadeer told the forum analyzing the global threat posed by the Chinese Communist Party under Xi, who removed presidential term limits in 2018, and could now rule indefinitely.

She said in a recorded message to the forum that “the most dangerous time” was right now, and called on “ethnic minorities oppressed by the Communist Party” to unite to resist it.

Unlike previous versions, Xi’s political report to the opening session of the 20th National Congress on Oct. 16 made no mention of “regional autonomy for ethnic minorities,” a phrase that had appeared in his reports to the 18th and 19th party congresses.

Before Xi took power, the Chinese government was criticized for widespread rights violations in the Xinjiang Uyghur Autonomous Region and the Tibetan Autonomous Region, but still paid lip service to the notion of autonomy, and allowed the use of the Tibetan and Uyghur languages to teach children in schools, along with a limited degree of religious activity.

Kelsang Gyaltsen, who represents the Tibetan government-in-exile on the democratic island of Taiwan, said Xi was at least still talking about “accelerating the development of ethnic minority regions” back in 2012, as well as “equality, solidarity, mutual assistance and harmony.”

By 2017, he had added the phrase “forging a national consciousness” and “the sinicization of religion,” two policies that were to give rise to a nationwide crackdown on Muslims, Christians and Tibetan Buddhists, as well as a ban on minority languages as a teaching medium in schools.

The ban on Mongolian prompted street protests and class boycotts by students and parents across the Inner Mongolia Autonomous Region, which borders the independent country of Mongolia, prompting a region-wide crackdown by riot squads and state security police in the fall of 2020.

Tibetan, Uyghur and Korean-language teaching is also being phased out of schools in ethnic minority areas, local parents and teachers have told RFA.

‘National unity’ and ‘Forging a sense of community’

Chinese writer and historian Wang Lixiong described one aspect of the “sinicization of religion” in Xinjiang in detail following a research trip to the region.

In a commentary for RFA’s Mandarin Service published on Tuesday, he cited a sign at a rural school listing “23 manifestations of illegal religious activities.”

“You can imagine how religious believers would feel, caught in such an endless web,” Wang wrote.

“The janitor told me that teachers were required to gather in school four days a week, even during vacation, to study politics, mainly anti-separatism,” he said. “Political study now takes up more of their time than studying for professional purposes.”

“Forging a sense of community” means abolishing ethnic identity and autonomy, he told RFA in a recent interview, adding that “strengthening exchanges” refers to the erasure of distinct ethnic identities.

“The Constitution and the Ethnic Region Autonomy Law clearly stipulate the protection of the rights and interests of ethnic minorities, but Xi Jinping’s report to the 20th party congress didn’t mention it,” he said.

Tseng Chien-yuen, an associate professor at Taiwan’s Central University, said Xi likely avoided mentioning it due to widespread international criticism — including at the United Nations — of China’s policies in ethnic minority areas.

“Of course he daren’t mention it; it is his flaw and a stain [on his regime],” Tseng told RFA.

“There is a major conflict between the party-state system and regional ethnic autonomy, which has worsened during Xi’s tenure, with concentration camps and ethnic minority groups stigmatized for their beliefs and cultural differences, or accused of terrorism,” he said.

“I can’t see any indication that he is reviewing [those policies].”

Other observers agreed that while Xi said little explicitly about ethnic policies, nothing about this year’s party congress indicates that there will be a loosening of restrictions currently in place in regions such as Tibet and Xinjiang.

Kunga Tashi, a U.S.-based Tibet and China analyst, told RFA that Xi’s speech “included nothing that signals positive changes for Tibet in the near future,” while Ilshat Hasan, the executive vice chairman of the World Uyghur Congress exile group, noted that Xi’s elevation of loyalists to China’s inner circle of policymakers “is not a good sign for the world or for Uyghur people.”

Kelsang Gyaltsen said the treatment of Tibetans, Uyghurs and ethnic Mongolians should also serve as a warning to democratic Taiwan.

“Now that Tibet, Xinjiang and Mongolia are all being tightly controlled, none of those promises [of autonomy] are worth the paper they’re written on,” he said.

“If Taiwan falls under the control of the Chinese Communist Party, like Tibet and Xinjiang … it won’t be one country, two systems [the promise of autonomy made to Hong Kong]. It’ll be one country, one system,” he said.