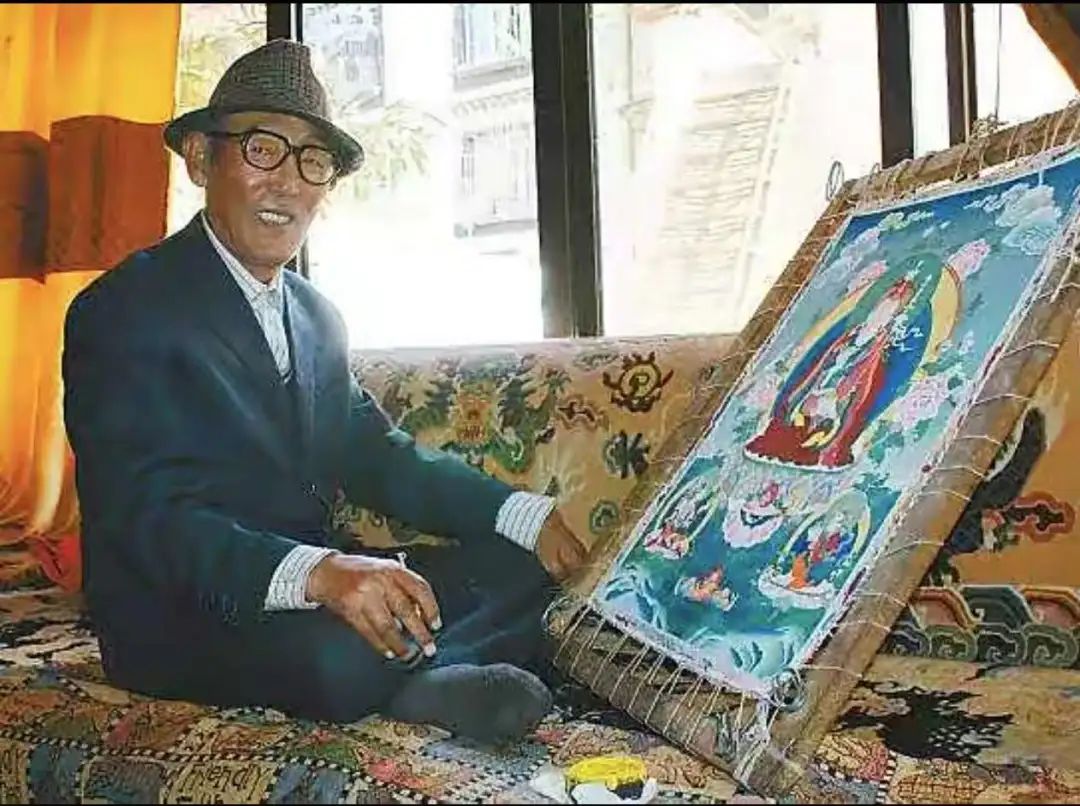 Tenpa Rabten, a prominent painter of Tibetan religious scrolls called thangkas, has died at the age of 82, RFA has learned.

Rabten, who passed on the knowledge of his traditional art form to hundreds of students, died Monday in the Tibetan capital Lhasa, according to sources in the region.

Born into a family of artists in 1941, Rabten was introduced to thangka painting at a young age. His grandfather Aepa Tsering Gyawu was the personal artist to the 13th Dalai Lama, Thubten Gyatso, and was one of the many artists who designed imagery for the Tibetan currency notes used before China’s takeover of Tibet in 1951.

Rabten’s father, Drungtok Kelsang Norbu, was a professor at the Creative Training Institute under the Kashag, Tibet’s pre-takeover governing council.

A significant amount of Tibet’s cultural heritage was destroyed during China’s 1966-1976 Cultural Revolution, and Tibetan artists like Tenpa Rabten were forbidden to produce traditional religious art. However, Rabten later wrote thousands of articles about traditional Tibetan painting, and served beginning in 2014 as a mentor in the Chinese National Artists Association.

In 1980, Rabten founded a private fine arts school providing free education for underprivileged students, eventually training around 200 artists. He also taught as a professor of traditional Tibetan painting at Tibet University in Lhasa and received international recognition, including awards given in China and Japan, honoring his contributions to the arts.

Speaking to RFA, Buchung Nubgya, a Tibetan living in New York, said that many of his own teachers were close friends of Tenpa Rabten and shared the same enthusiasm for their profession. He had met Rabten several times himself, he said.

“There have been many teachers of thangka painting, but Tenpa Rabten was someone who nurtured hundreds of students under his personal guidance, and he contributed immensely to the preservation of Tibetan traditional painting,” Nubgya said.

“His passing is an irreparable loss for Tibetan tradition.”

Thangka paintings date back to the 7th century. They are not only valued for their aesthetic beauty, they also serve as educational and meditational aids, as each detail has a meaning that refers to concepts in Buddhist philosophy.

Thangka also have ceremonial use. Some Tibetan monasteries possess huge Thangka scrolls that are unrolled on certain holidays for public viewings and the ceremonies.

The traditional art has been preserved and passed through the lineage of Thangka masters and their students. Sometimes the lineage remains with the family and is passed from father to son. An original Thangka painting is a rarity and can cost between $1,000 and $15,000 depending on its size and intricacy.