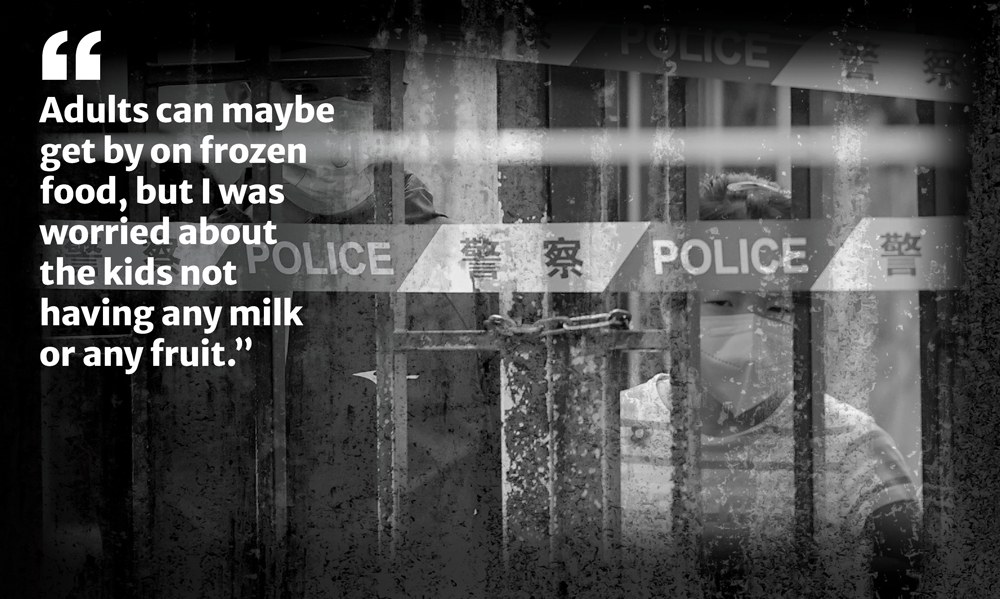 The weeks-long COVID-19 lockdown in China has taken a huge mental health toll, with more than 40 percent of the city’s 26 million residents reporting symptoms of depression in a recent poll.

Shanghai residents have been battling food shortages, barriers to medical treatment, repeated mass, compulsory PCR and antigen testing, as well as the constant threat of being sent off to an isolation camp or makeshift hospital, having their pets killed and their homes ransacked by “disinfection” teams, or being welded inside their homes by local officials keen to hit the right quotas in the service of Chinese leader Xi Jinping’s zero-COVID policy.

A poll of more than 1,000 Shanghai residents conducted by the @Zhaoluming Weibo account found that more than 400 of them reported having experienced a “depressed mood” during lockdown.

A resident of downtown Shanghai surnamed Wang said he believes the true number of depressed people could be much higher.

“Forty percent? I would say more like 80 percent,” Wang said. “Everyone has a sense of resentment and their psychology isn’t quite normal, whole communities shut up like animals in a zoo.”

Qiu Jianzhen, director of the outpatient department of psychological counseling and treatment at the Shanghai Mental Health Center, said in a recent interview with state broadcaster CCTV that the number of calls to the center’s psychological hotline had nearly tripled in the past month to more than 3,000.

Eighty percent of callers cited the pandemic as an issue for their mental health, Qiu said.

“If you need to see a doctor or call an ambulance, the neighborhood committee needs to sign off with a certificate and a letter of commitment,” Wang told RFA. “There is a lot of anger about that, because what if it’s urgent?”

“Most of the people who live in my compound are temporary workers, so if they can’t work, they get no wages,” he said. “Even if they lift the lockdown, who will compensate us for the loss of more than a month’s income?”

“How can the small company bosses do that … when they are going bankrupt themselves?”

Wang lives in a low-income district of Puxi with his family, and was mostly worried about how to feed his kids when lockdown came.

“Adults can maybe get by on frozen food, but I was worried about the kids not having any milk or any fruit,” Wang said. “We would try to make a 950 ml bottle of milk last a few days, but then what would we do after that?”

And it’s not just the economically marginalized who are suffering.

Wang said the burden on working parents will likely increase now that people are gradually returning to work.

“My former colleague was complaining that now they have to try to grab food, keep up with antigen and PCR testing, talk to their kids’ teachers, all while taking part in meetings via video call,” he said. “She’s going crazy.”

Wang said the toll taken on people’s well-being was very visible in his neighborhood.

“There were people who jumped off the top of the building in the residential neighborhood next to us, and I saw news of people jumping from buildings, not just in text, but video clips, which have a psychological impact in themselves,” Wang said.

“It’s hard not to be depressed in such circumstances,” he said.

A white-collar worker surnamed Li, who works for a large foreign company, said he has sought out psychological counseling during lockdown despite not having financial worries.

“It’s like being incarcerated for one or two months,” Li said. “Loss of freedom over a long period of time will give rise to a lot of negative emotions, the most prominent of which is anger.”

A resident of Jing’an district surnamed Sun said she had a mental breakdown over the authorities’ chaotic handling of mass COVID-19 tests, after she started to show symptoms on May 1, but was left without a PCR test despite requesting one.

“On the night of May 6, I went totally crazy, calling the emergency services many times,” Sun said. “I totally lost control.”

“If the ambulance hadn’t come, I would have run out right there … and started spreading the virus.”

Eventually, Sun and her symptomatic family were taken to an isolation facility, but she suspects the delay in testing them was due to a political attempt to massage new case figures.

She pointed to repeated complaints on social media that officials appeared to hand out test results and change them at will.

In universities students have complained of unclean food and lack of support for their mental health.

A psychology lecturer surnamed Chen said one woman had to spend thousands of yuan to escape the city by private taxi after being stuck in a situation of food scarcity while suffering from anorexia nervosa.

“She couldn’t eat, and her mental state was very bad,” he said. “She had a relapse [of anorexia] after being stuck inside the dorm building since early March.”

Serene, an international school counselor, said many of her students have gone back to their parental homes, while mental health problems have doubled among those who remained.

“It’s mostly about conflicts with parents, but since the pandemic also about difficulties with distance-learning,” she said. “There is also the lack of interaction with peers and lack of social support.”

“One of my students was having difficulty with interpersonal communication, but he had bravely begun to take the first steps before the pandemic, and had formed some relationships,” she said. “But when the pandemic came … he told me he feared he would never make friends again.”