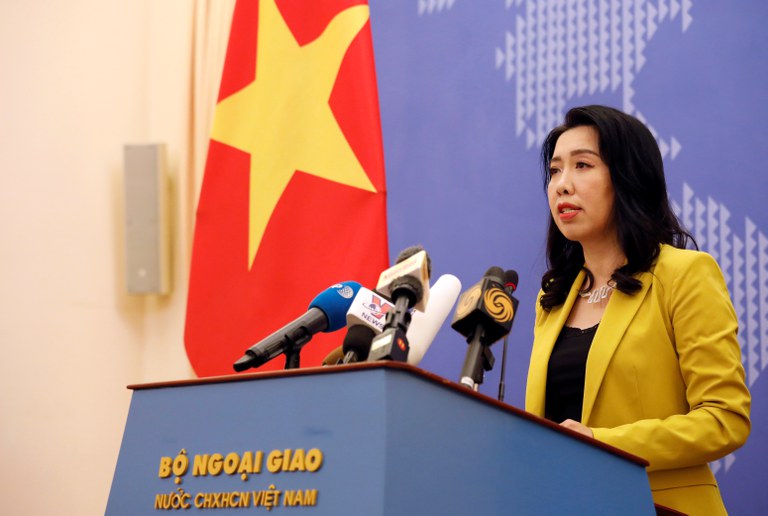 China has once again announced a unilateral fishing moratorium in the South China Sea, to vigorous protests by Vietnam but the Philippines has so far not reacted.

The three-and-half-month ban began on Sunday and covers the waters north of 12 degrees north latitude in the South China Sea which Vietnam and the Philippines also call their “traditional fishing grounds.”

Hanoi spoke up against the fishing ban, calling it “a violation of Vietnam’s sovereignty and territorial jurisdiction.”

The moratorium applies to part of the Gulf of Tonkin, and the Paracel Islands claimed by both China and Vietnam.

The Vietnamese Foreign Ministry’s spokeswoman said: “Vietnam requests China to respect Vietnam’s sovereignty over the Paracel Islands, sovereign rights and jurisdiction over its maritime zones when taking measures to conserve biological resources in the East Sea (South China Sea), without complicating the situation towards maintaining peace, stability and order in the East Sea.”

Meanwhile the Philippines, which holds a presidential election next weekend, hasn’t responded to the moratorium.

In the past, Manila has repeatedly protested and even called on Filipino fishermen to ignore the Chinese ban and continue their activities in the waters also known as the West Philippine Sea.

A collapse of fishery stocks in the South China Sea due to overfishing and climate change could fuel serious tensions and even armed conflict, experts said.

“Overfishing is the norm in open-access fisheries, so restrictions on fishing represent a sensible policy,” said John Quiggin, professor of economics at the University of Queensland in Australia.

“But China’s decision to impose such restrictions implies a claim of territorial control which other nations are contesting,” Quiggin told RFA.

“The best outcome would be an interim agreement to limit over-fishing, until boundary disputes are resolved, if that ever happens,” he added.

China’s fishing ban in the South China Sea is expected to end on Aug. 16. It also covers the Bohai Sea, the Yellow Sea, the East China Sea, with a later end-date.

Chinese media said this week that the South China Sea branch of the Coast Guard and local authorities will patrol major fishing grounds and ports “to ensure that the ban will be well observed.”

At the end of last year, Beijing issued a new regulation threatening hefty fines of up to tens of thousands of dollars on activities of foreign fishermen in China’s “jurisdictional waters.”

The self-claimed “jurisdictional waters” extend to most of the South China Sea but the claims are disputed by China’s neighbors and have been rejected by an international tribunal.

Rashid Sumaila, a professor at the University of British Columbia in Canada and author of a 2021 report on the fishery industry in the East and South China Seas, said in an interview with RFA that “the simmering conflict that we see in the South China Sea is mostly because of fish even though countries don’t say it out loud.”

“Fishery is one of the reasons China’s entangled in disputes with its neighbors in the South China Sea,” Sumaila said.

Meanwhile, China’s distant-water fishing causes serious concerns across the world, mainly because of the size of the Chinese fleet and its “illegal behavior,” according to a recent report.

It found that China’s distant-fishing fleet that operates on the high seas and beyond its exclusive economic zone is “by far the largest” in the world.

The number of Chinese distant-water fishing boats is unknown, but could be around 2,700, according to some estimates.

China is responsible for 38 percent of the distant-water fishing activities of the world’s 10 largest fleets in other countries’ waters, the report said.

Chinese fishing vessels operate “across the globe in both areas beyond national jurisdiction and in the EEZs of coastal states.”

Researchers who worked on the report have identified “high instances of illegal, unreported and unregulated (IUU) fishing, destructive practises such as bottom trawling and the use of forced, bonded and slave labour and trafficked crew, alongside the widespread abuse of migrant crewmembers.”