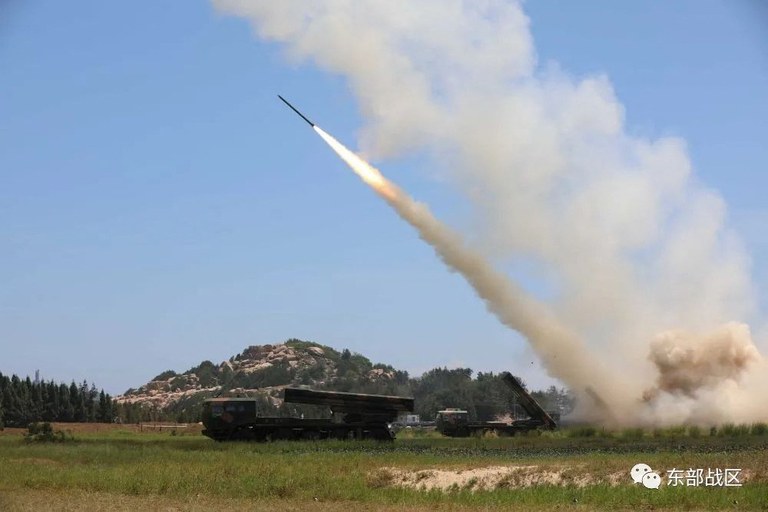 U.S. defense policy makers do not think China could take over Taiwan militarily in the next two years but Undersecretary of Defense for Policy Colin Kahl said China is trying to “salami slice their way into a new status quo” in the region instead.

China is continuing its military pressure on Taiwan with more air and naval drills off the back of the major four-day exercise conducted in response to U.S. House Speaker Nancy Pelosi’s visit to the island.

On Tuesday, the Eastern Theater Command of the Chinese People’s Liberation Army (PLA) “continued to organize practical joint exercises in the sea and airspace around Taiwan Island, focusing on joint blockades and joint resupply logistics,” the Ministry of Defense in Beijing said in a statement.

The PLA carried out anti-submarine and sea assault drills in waters around Taiwan on Monday, sending 13 warships, and 39 aircraft, around half of which crossed the median line of the Taiwan Strait.

Beijing also announced a new series of military drills in the South China Sea, Yellow Sea and Bohai Sea that will continue until next month.

“Clearly the PRC is trying to coerce Taiwan, clearly they’re trying to coerce the international community, and all I’ll say is we’re not going to take the bait and it’s not going to work,” Kahl told a press conference at the Pentagon on Monday, referring to China by its official name the People’s Republic of China.

“What we’ll do instead is to continue to fly, to sail and to operate wherever international law allows us to do so, and that includes in the Taiwan Strait,” the undersecretary said, adding that he thinks “there’s a lot of confidence in that U.S. commitment.”

That means the U.S. military is set to continue transiting the Taiwan Strait, which it considers international waters, as well as conducting freedom of navigation operations in the South China and East China Seas.

President Joe Biden on Monday said he was “not worried” about China’s military exercises around Taiwan but was “concerned that they’re moving as much as they are.”

“But I don’t think they’re going to do anything more [than] they are,” he told reporters at the Delaware Air National Guard Base

“We’re at a moment of profound international tension… I think there was a sense that… the world didn’t require another instance of rising tensions but it is what it is and the speaker had every right to go and when she made the final decision we were fully supportive,” he said.

For the first time, the PLA reportedly fired missiles over Taiwan’s main island, some of which landed in Japan’s exclusive economic zone within 200 nautical miles (370 kilometers) from its shores.

The U.S. military responded by deploying warships and aircraft in the area.

U.S. Navy’s only forward-deployed aircraft carrier Ronald Reagan and its strike group has been in northern Philippine Sea after being ordered by Defense Secretary Lloyd Austin to “remain on station in the general area to monitor the situation.”

A big deck amphibious assault ship, the USS Tripoli, is also currently in the Philippine Sea, according to the U.S. Naval Institute.

Data provided by the ship tracking website Marine Traffic show that the missile-tracking vessel USNS Howard O. Lorenzen has been operating in the waters east of Taiwan for several days.

Equipped with a sophisticated radar system, “its purpose is to track airborne missiles,” said Gordon Arthur, a military analyst and Asia-Pacific editor of Shephard Media, a defense news portal.

“Given its proximity to Taiwan, I’d say that’s exactly what it’s been doing,” Arthur told RFA.

“We continue to have a One China policy and we continue to object to any unilateral change in the status quo, whether that be from the PRC or from Taiwan,” he emphasized.

“China has used the drills in its military play-book to prepare for the invasion of Taiwan,” Wu said.

“China’s real intention behind these military exercises is to alter the status quo in the Taiwan Strait and the entire region,” the minister said, warning that Beijing’s behavior towards Taiwan is “merely a pretext” and “its ambitions and impact is extending far beyond Taiwan.”