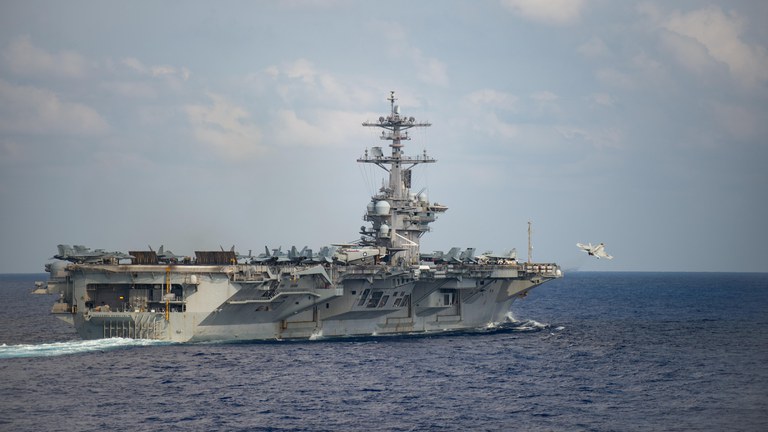 The aircraft carrier USS Ronald Reagan is to visit Vietnam in the second half of July, the first U.S. carrier to stop in a port there in more than a year, two local sources said. The last visit was the USS Theodore Roosevelt in March 2020 when all 5,000 crew had to test for COVID-19 upon visiting Danang.

The supercarrier was conducting exercise in the Philippine Sea at the weekend after leaving Guam late June. Vietnam has now fully opened to foreign visitors as the government adopts a policy of “living with COVID”.

RFA contacted the U.S. Indo-Pacific Command for information but has yet to receive a reply. If confirmed, this will be only the third U.S. navy aircraft carrier to visit the country since the end of the Vietnam War in 1975.

The first carrier to make a port call in Vietnam was the USS Carl Vinson, in March 2018. There were talks about a planned visit by the USS Abraham Lincoln in May but it didn’t materialize. The Abraham Lincoln is now taking part in the biennial Rim of the Pacific (RIMPAC) naval exercise near Hawaii.

The USS Ronald Reagan (CVN 76), named after the 40th U.S. President, is a Nimitz-class, nuclear-powered supercarrier, homeported in Yokosuka, Japan.

It too suffered a COVID outbreak in March 2020 when in the West Pacific, prompting a lockdown at the Yokosuka Naval Base, home of the U.S. 7th Fleet.

By the end of March 2020, the U.S. Navy reported a total of 134 personnel had contracted COVID without naming their specific ships.

The shipping and maritime sources close to the Vietnamese Navy said the USS Ronald Reagan, carrying 90 aircraft including a number of F/A-18E Super Hornets and sophisticated missile systems, will pay a five-day visit to Danang in central Vietnam “sometime in the next two weeks.”

All visits by foreign warships are carefully regulated by the Vietnamese military which doesn’t want to be seen as siding with any world power. In recent years, however, former enemies Hanoi and Washington have made big strides towards a strategic partnership amid China’s assertive moves in the South China Sea, over which Vietnam and five other nations hold competing territorial claims.

Since the U.S. lifted an arms embargo on Vietnam in 2016, during the Obama administration, Vietnam has started acquiring U.S. military hardware including vessels for its growing coast guard force.

The U.S. accuses China of militarizing the sea and regularly despatches naval ships to perform so-called freedom of navigation operations (FONOPs), to much protest from Beijing.

In June 2016, before an international tribunal requested by the Philippines delivered an historic ruling against China’s excessive and illegal claims in the South China Sea, the Ronald Reagan was deployed to the region in a mission largely seen as a show of support for the case.

In the latest development, the world’s largest naval exercise, Rim of the Pacific (RIMPAC) 2022, led by the United States, is underway until Aug. 4 to showcase the maritime might of the U.S. and allies.

Five countries bordering the South China Sea – Brunei, Indonesia, Malaysia, the Philippines and Singapore – are amongst the 26 participating nations with 25,000 personnel.

This political clout “is aimed at ensuring an ‘Indo-Pacific’ that is subject to the dictates of the U.S. rather than one that is truly ‘free and open’,” it said.

The paper warned that with “the rise of its national strength, China has developed the capacity to defend its core interests, sovereignty and territorial integrity in a broader scope in the Asia-Pacific region and beyond.”

China launched its third aircraft carrier, developed and built entirely in the country, on June 17. The Liaoning is an 80,000 tonner vessel equipped with high tech equipment such as electromagnetic catapults for launching aircraft. It is the first aircraft carrier wholly designed and built in China. The first carrier, the Liaoning, was bought from Ukraine and repurposed. The second, the Shandong, was based on the Liaoning’s design.