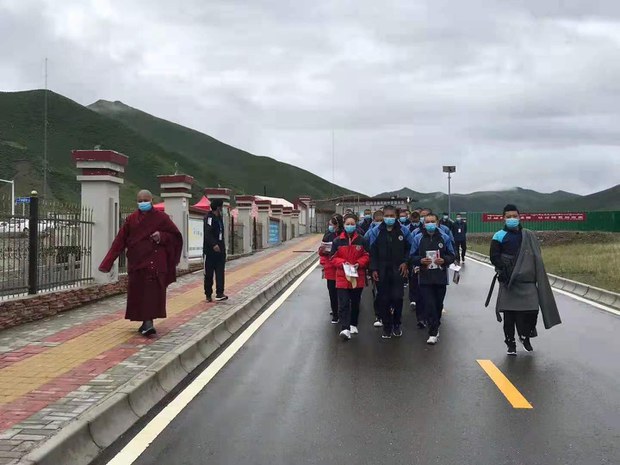 Authorities in China’s Qinghai province have freed a Tibetan schoolteacher after holding her in jail since last year, when her school for Tibetan students was closed for teaching classes in their own language, RFA has learned.

Rinchen Kyi, 42, was released on Aug. 24 at about 8:00 p.m. local time and taken to her family home in Qinghai’s Darlag (in Chinese, Dali) county without advance word given to family members, a Tibetan living in exile told RFA this week, citing local sources.

“Two cars carrying security personnel arrived that evening at the door of Rinchen Kyi’s family home,” RFA’s source said, speaking on condition of anonymity for security reasons. “A few neighbors came out to see what was happening and saw Rinchen Kyi get out of one the cars and immediately enter her house.”

“Police prevented people from getting too close to her, so no one was able to learn where she had been held all this time,” the source added.

Kyi was a teacher of 2nd and 3rd grade students at the Golog Sengdruk Taktse School in Darlag when it was closed on July 8, 2021 amid a regionwide clampdown on schools offering instruction in the Tibetan language, sources told RFA in an earlier report.

Authorities took her to a hospital on Aug. 1 citing an alleged mental illness, and she was later charged with inciting separatism and arrested at her home, with no word given to her family concerning her whereabouts or condition of health.

Separatism is a charge frequently used by Chinese authorities against Tibetans promoting the preservation of Tibet’s language and culture in the face of domination by China’s majority Han population.

Pema Gyal, a researcher at London-based Tibet Watch, confirmed Kyi’s release from jail. “We need to know now where she was detained and what kind of reeducation program she may have been subjected to,” Gyal added.

Darlag-area students at Sengdruk were divided into different sections when the school closed and were sent to study at separate schools, while students who had come to Sengdruk from areas in neighboring Sichuan province had trouble at first finding schools to take them in, sources told RFA in earlier reports.

Authorities in Sichuan have meanwhile also closed down private Tibetan schools offering classes taught in the Tibetan language, forcing students to go instead to government-run schools where they are taught entirely in Chinese.

The move is being pushed in the name of providing uniformity in the use of textbooks and instructional materials, but parents of the affected children and other local Tibetans have expressed concern over the imposed restrictions, saying that keeping young Tibetans away from their culture and language will have severe negative consequences for the future.

Language rights have become a particular focus for Tibetan efforts to assert national identity in recent years, with informally organized language courses in the monasteries and towns deemed “illegal associations” and teachers subject to detention and arrest, sources say.