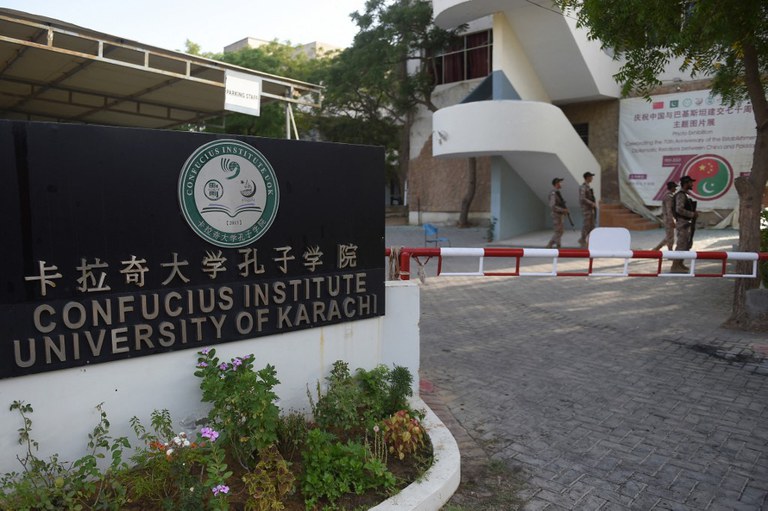 Four people, including three Chinese nationals, have died in a suicide bomb attack on a Confucius Institute in Pakistan thought to be linked to Beijing’s Belt and Road projects in the country.

Tuesday‘s attack near the Confucius Institute at the University of Karachi in southern Pakistan left four people dead, including the director, Huang Guiping, and teachers Ding Mupeng and Chen Sai. Another Chinese national, Wang Yuqing, was injured alongside several local people.

CCTV footage of the blast showed a person in a burqa walking towards a van, which then exploded, covering the surrounding area in thick smoke.

News photos from the aftermath of the blast showed the Confucius Institute building with shattered windows.

Pakistani military personnel and police cordoned off the area, with news photos showing the remains of a charred, white Toyota van near the gate of the Confucius Institute on the Karachi University campus.

The van, according to local media reports, had been carrying several teachers to the Institute when it was attacked, escorted by several motorcycles.

The injured Chinese national was rushed to a local hospital for treatment, along with several injured security personnel and other staff.

The Chinese Consulate General in Karachi confirmed that the three deceased were staff of the Confucius Institute at the University of Karachi.

It said the “terrorist attack” took place at around 2.20 p.m. local time on April 26, and that the consulate has activated its emergency plan, raising the security alert level for all Chinese institutions, projects and personnel in Pakistan.

A consulate employee who answered the phone declined to comment when contacted by RFA on Wednesday.

“This isn’t my responsibility,” the staff member said. “I don’t know the specific details of the situation.”

“It’s not that I don’t want to answer your query; I really don’t know. You need to contact the embassy,” the staff member said.

Repeated calls to the Chinese embassy rang unanswered during office hours on Wednesday.

“First of all, from a political point of view, Chinese people are a very big target and an influential target that can make the Pakistani government pay a high level of attention,” a Chinese national living in Pakistan told RFA.
“The Chinese government will also always pay a high level of attention to security issues,” said the person, who asked to remain anonymous. “So these are some of the reasons for this terrorist attack against the Chinese.”

The separatist group the Baloch Liberation Army, which has claimed responsibility for the attack on the Confucius Institute, said more deadly attacks on Chinese targets could follow.

The group is one of several fighting for independence in Pakistan’s biggest province, where Chinese companies are involved in lucrative mining and energy projects under the Chinese Communist Party (CCP)’s Belt and Road global infrastructure initiative.

“Hundreds of highly trained male and female members of the Baloch Liberation Army’s Majeed Brigade are ready to carry out deadly attacks in any part of Balochistan and Pakistan,” spokesman Jeeyand Baloch said in a statement on Wednesday reported by Agence France-Presse.

He called on China to halt its “exploitation projects” in Balochistan and its “occupying of the Pakistani state.”

The group named the bomber as Shaari Baloch, a 30-year-old mother of two who had been studying for a master’s degree.

China’s Ministry of Foreign Affairs called on Pakistan to take steps to guarantee the safety of all Chinese citizens and interests in the country and to launch a full investigation into the blast, warning Chinese nationals not to go out unless necessary, and to take “the strictest precautions.”

The Prime Minister’s Office issued a message of condolence, and vowed to eliminate terrorists, while Prime Minister Shabazz Sharif paid a visit to the Chinese embassy to express condolences, condemnation, and to promise a full investigation.

“Confucius Institutes are particularly vulnerable and don’t have very strong security,” Shih told RFA. “A lot of the infrastructure and engineering projects along the China-Pakistan Economic Corridor employ various private security guards and even the Pakistani army [for protection], so it’s not easy to carry out an attack.”

“Confucius Institutes are relatively vulnerable … so it’s not surprising it was the target of a suicide attack,” he said.

Shih said the attack came amid growing resentment over the presence of Chinese companies involved in Belt and Road projects.

“People in Balochistan, the ethnic groups in the upper and lower reaches, have always felt that they are a neglected and bullied minority … who have received no benefits from the construction projects of the Belt and Road.”

The attacks are a fresh blow for Belt and Road in Pakistan, following a Bloomberg report in 2021 that the planned flagship port and airport development at Gwadar, the last stop in the China-Pakistan Corridor and terminus for dozens of planned roads, railways and pipelines, was semi-moribund.

Many infrastructure projects in Pakistan are still heavily indebted to China, while incoming Chinese investment has been falling year-on-year.

In October, Pakistan was forced to borrow U.S.$6 billion from the International Monetary Fund (IMF) to meet its immediate needs.