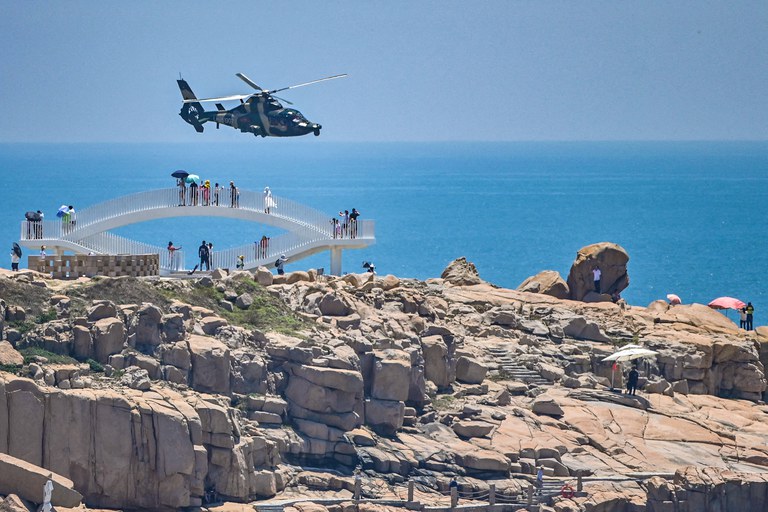 Authorities in Taiwan on Thursday warned the democratic island’s 23 million citizens not to travel to China unless absolutely necessary, after police in China’s Zhejiang announced the arrest of a Taiwanese national for “separatism.”

Yang, a 32-year-old pro-democracy campaigner and vice chairman of the independence-leaning Taiwanese National Party, was taken into custody by state security police in Zhejiang’s Wenzhou city on Aug. 3 on charges relating to his activities in support of Taiwanese independence, state broadcaster CCTV reported.

“Taiwanese nationals should exercise caution when traveling to China given the potential risks to their personal freedom and security,” CNA quoted the MAC as saying.

The MAC has called on China to stick to a cross-straits anti-crime agreement, but has yet to receive notification of his arrest through official channels, CNA said.

“Yang’s arrest has been viewed in some quarters as retaliation for U.S. House of Representatives Speaker Nancy Pelosi’s recently concluded trip to Taiwan,” the agency reported.

Seeing Pelosi’s visit to Taiwan as a threat to China’s sovereignty claims, Beijing has taken a number of countermeasures, including banning the import of certain food from Taiwan and scheduling live-fire drills in six maritime areas in the vicinity of the island from Aug. 4-7, it said.

‘Irrational actions’ by the PRC

“China, which claims to be a great power, has repeatedly abused its judicial system to detain Taiwanese people on the grounds of national security,” the party said in a statement widely reported in local media.

“The CCP has resorted to a series of irrational actions in the past couple of days to exert extreme pressure on Taiwan via malicious bullying behavior, in a bid to sow fear among the Taiwanese people and force Taiwan to submit,” the DDP said.

“Today they have stooped to using the personal freedom of a Taiwanese national for political blackmail … meaning that Taiwanese people in China could be arrested at any time as part of this red terror campaign,” it said.

The Taiwan National Party was set up in July 2011 by former national policy adviser to the president Huang Hua, independence activist Kao Kin-lang, scholars Liu Chong-yee, Yang Chih-yuan and others.

Exiled Chinese dissident Guo Baosheng, who is acquainted with Yang, said he was shocked by the news of his arrest.

“I was shocked because he hated the CCP and swore that he would never go back to China unless it was China free,” Guo told RFA.

Ammunition in dispute over Pelosi

Gao said the last contact he had with Yang was in May this year, adding that Yang had been less politically active since losing his bid for a New Taipei legislature seat in 2020.

“He probably thought there was no risk and just went on over there,” Guo said. “Also, I am guessing some spy agents tricked him [to go there] by pretending to be [fellow activists] persecuted by the Chinese Communist Party (CCP).”

“He likes to befriend these dissidents,” he added.

Guo said Yang could have been arrested a while ago, but Beijing is now using his case as ammunition in the row over Pelosi’s Taiwan visit, which has also prompted live-fire military exercises by the People’s Liberation Army (PLA), and the firing of missiles across the island.

Another friend of Yang’s, Wang Yikai, said on his personal Facebook page that he knew that Yang had recently signed up for a Go tournament in Wenzhou.

Aside from the military response, several government websites in Taiwan were attacked during Pelosi’s visit, with cybersecurity research institutes saying the attacks were likely launched by Chinese hackers.

Chen Kuide, executive chairman of the Princeton China Society, said all of these reactions were predictable.

“For Pelosi to make this visit in such a formal and high-profile way has angered the CCP and caused a great loss of face,” Chen told RFA.

“All of these things are being done to save face for the country and to restore the [Chinese] public’s good impression of their country,” he said. “They’ll do it for a while, and do it like they mean it, but really starting something with the U.S. military wouldn’t be a good idea, although possible.”

A Shanghai resident surnamed Liu said that Pelosi’s visit had mobilized strong nationalistic sentiment among CCP supporters online, known as Little Pinks, with many calling for Pelosi’s plane to be shot down.

But he said much of the online hype was a distraction technique designed to whip up populist support ahead of the 20th party congress later in the year.

“Without such hot topics to divert public attention from domestic social conflicts, how can [CCP leader Xi Jinping] smoothly achieve another term at the 20th National Congress?” Liu said.

“Most people know they wouldn’t start a war, but they were enjoying the excitement,” Wang said. “In the end, [China] softened its stance, and got a lot of online ridicule for that.”

“Now, the topic has been banned from the internet.”

MAC spokesman Chiu Chui-cheng said: “The people of Taiwan will never submit to Beijing’s civil and military attacks … [and] will resolutely take countermeasures.”

“We warn the CCP authorities not to take this opportunity to provoke trouble, and immediately abandon its attempts at intimidation and retaliation,” Chiu said.