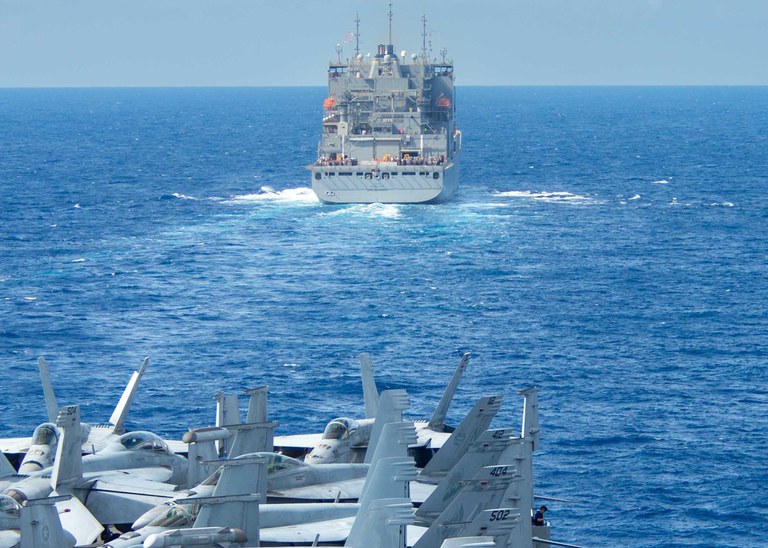 The Taiwanese military has stepped up its combat readiness to prepare for threats from China ahead of the U.S. House Speaker Nancy Pelosi’s potential visit to the island, local media reported.

At the same time, the U.S. aircraft carrier USS Ronald Reagan and its strike group is operating near Taiwan, a Chinese think-tank said.

Taiwan’s official Central News Agency (CNA) quoted anonymous “reliable sources” as saying that from 08:00 a.m. on Tuesday until 12:00 noon on Thursday the military will “strengthen combat readiness” of troops and make adjustments in accordance to the threats from China’s People’s Liberation Army (PLA).

Taiwan’s armed forces operate at two levels of combat readiness for peacetime and wartime, each level comprises several stages. It is understood that the current stage of preparedness is still within the peacetime level but could change.

The island’s Ministry of National Defense has yet to make any comment on the news that comes as China announced more live-fire exercises in the South China Sea and Bohai Sea.

On Tuesday morning several Chinese military aircraft and warships came close to the median line of the Taiwan Strait – the tacit maritime border between Taiwan and the mainland – Reuters said, quoting an anonymous source.

This move is “unusual” and can be seen as “very provocative,” the source was quoted as saying.

Taiwan’s defense ministry said the island’s military has a “full grasp” of activities near Taiwan and “will appropriately dispatch forces in reaction to enemy threats.”

On Monday and Tuesday China announced four more live-fire drills on top of four exercises that ended at the weekend.

The first one is being held in the South China Sea near Hainan Island on Aug. 1 until Aug. 6, the same period of Pelosi’s Asia tour.

On Sunday, just one day before Pelosi began her Asia trip, the PLA also conducted mock air combat training after midnight “with the aim of improving the pilots’ ability to quickly enter combat status for abnormal situations at any time,” the state-supported Global Times reported.

RFA sources, and sources cited by local media and America’s CNN, said Nancy Pelosi would make an unofficial trip on Tuesday evening to the island, which is not on her official four-nation itinerary.

China issued fresh warnings that the visit “would lead to serious consequences.”

“If Pelosi visits Taiwan, the Chinese side will respond resolutely and take strong countermeasures to defend our sovereignty and territorial integrity,” Chinese Foreign Ministry’s spokesman Zhao Lijian told a press conference in Beijing on Monday.

“As for what those measures will be, let’s see what happens if she actually goes,” Zhao added.

In Washington, the White House and the top U.S. diplomat said Pelosi’s travel plans were up to her, but urged China not to turn any such visit to Taiwan into a diplomatic crisis.

“The speaker has the right to visit Taiwan, and a speaker of the House has visited Taiwan before, without incident, as have many members of Congress, including this year,” said national security spokesman John Kirby.

“There is no reason for Beijing to turn a potential visit consistent with long-standing U.S. policy into some sort of crisis or conflict, or use it as a pretext to increase aggressive military activity in or around the Taiwan Strait,” he told reporters.

Kirby said Washington would not be moved by any Chinese effort to raise tensions over Pelosi.

“We will not take the bait or engage in saber rattling. At the same time, we will not be intimidated,” he said.

Taiwan’s presidential office and foreign ministry have both declined to comment on any visit by Pelosi, although premier Su Chen-chang has said the island’s government, which still uses the name of the 1911 Republic of China, will welcome any foreign VIP guests.

The United States does not recognize Taiwan diplomatically, but retains close unofficial ties with Taipei and is obligated by law to provide it with defense capabilities.

Beijing considers the self-ruling, democratic island a breakaway province, to be united with the mainland by force if necessary, and objects strongly to high-level U.S. visits.