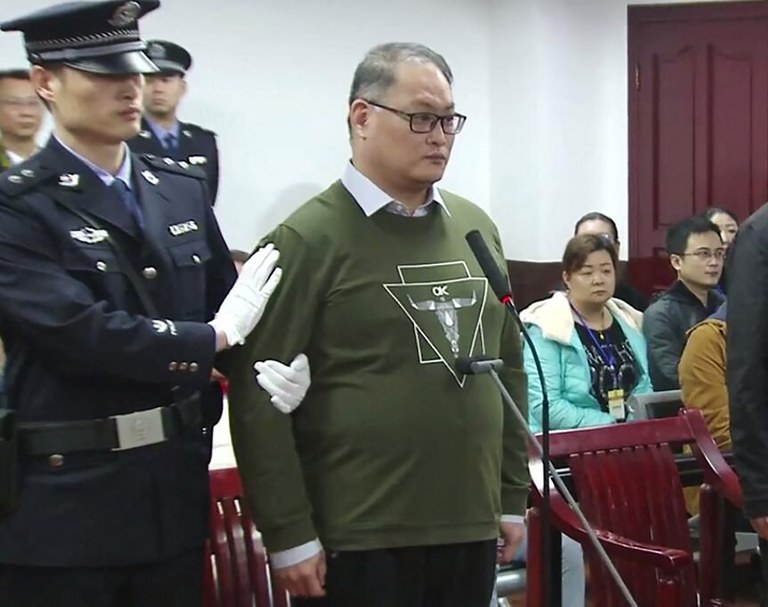 Taiwanese NGO worker Lee Ming-Cheh was released from Chishan Prison in the central Chinese province of Hunan on April 15 after serving nearly five years for “attempting to subvert state power.”  Lee, a course director at Taiwan’s Wenshan Community College, was a lifelong activist for Taiwan’s ruling Democratic Progressive Party, which Beijing vilifies as a separatist group that rejects China’s claim over the democratic island. Among the accusations he faced at Hunan’s Yueyang Intermediate People’s Court was that he set up social media chat groups to “vilify China.”  Lee has been invited to Washington, D.C. to testify before the U.S. Congress and other institutions about human rights conditions in Chinese prisons, the role of international pressure in helping him get slightly better treatment while in jail, and Beijing’s expansion of repressive tactics to Taiwan and around the world. He was unable to enter the U.S., however, because the Chinese-made COVID vaccines that he received while he was in prison are not recognized and approved by the World Health Organization and therefore do not meet Centers for Disease Control regulation for entry. He spoke to Hsia Hsiao-hwa and Paul Tuan of RFA Mandarin about his prison experience, which he describes as “field research” into China’s human rights situation. Lee stressed to RFA that constant activism on his behalf by his wife, American and Taiwanese supporters and U.S. and European Union government entities helped him during his incarceration.

“Since Xi Jinping took office, mine was the only ‘subversion of state power’ case that was tried in public. There is an upside of an open trial. The prosecutor must lay out the evidence clearly. They cannot smear me as a spy, nor can they claim that I went to China for prostitution. None of the incriminating evidence that China has presented in court was about what I actually did in China. The public trial turned out to be a display of evidence that China has violated freedom of speech globally. China provided self-incriminating evidence.

“In political cases, there would be a rehearsal before the trial. The attorneys and the prosecutors rehearsed the entire process of a trial. Even the defense lawyer (who was the then-Hunan delegate to the NPC) that the Chinese government has hired for Peng Yuhua, the co-defendant of the case, questioned how the national security agency can list social media app chat groups as formal organizations and fabricated stories about these groups having solid structures and specific job assignments.“

On isolation under observation:

“The prison guards would not let you have any contact with the outside world. There was no formal arrest. There was no lawyer representation. You were not allowed access to any books, magazines, televisions. You were just under full arrest. Twenty-four hours a day, you were being watched by a two-person team, even when you went to the bathroom or took a shower. It caused tremendous psychological stress. Many political prisoners in China suffer from mental health issues because they were severely restricted in terms of their residence locations and conditions of their living quarters. I am very fortunate. Under pressure from the international society, (the situation) only lasted for two months. The damage inflicted on one’s mind and body fits what the United Nations considers as psychological torture.”

On prison food and water that left him with polyps in his gall bladder when he was released:

“The doctor said what I ate and drank over the past few years had been too dirty. In Chishan Prison, we drank water from the Dongting Lake. There was a lot of sediment in the boiled water. Even the prison guards would not drink it. Many prisoners who served longer terms have suffered from diseases such as urethral stones and kidney stones because of the poor living conditions.”

On a letter-writing campaign for Lee led by NGOs in Taiwan:

“In China’s domestic propaganda, these people (activists) were cooperating with the US imperialism power and mobilizing color-scheme revolutions to destroy peace in China. If the police officers did not know me, they might have really believed that I was a vicious villain who would become violent when interacting with someone. Yet if you write letters to prisons, the police would know that many people care about this prisoner and that they should not treat him with excessive force. A saying in China goes like this, ‘there is no unconditional love’; ‘there is no unconditional hatred.’ The fact that so many strangers are writing to this person who they do not know would make the prison guard and the warden think again: This person may not be as vicious as they’d thought he would be.”

On regular visits from his wife, Lee Ching-yu, until the COVID-19 pandemic halted them:

“Many families of Chinese political prisoners were deprived of the visitation rights to meet with their loved ones. My wife’s visits helped me physically and mentally. I am able to disclose the obsolete practices in the Chinese prisons. The visitations also allowed me to be more than just an inmate but someone who advocates for human rights and conducts field research on human rights.”

On China’s creeping extension of repressive policies and censorship to self-ruled Taiwan and beyond:

“China is acting to extend its jurisdiction beyond its borders to Taiwan, over which China has never ruled. China also used comments collected on the Internet as its evidence to find me guilty of ‘subversion of state power’. China clamps down on freedom of speech and on the use of Internet. It extends its jurisdiction to anyone in the world who uses Chinese social media apps.”

On China’s crackdown against human rights lawyers, NGO activists and other rights defenders: